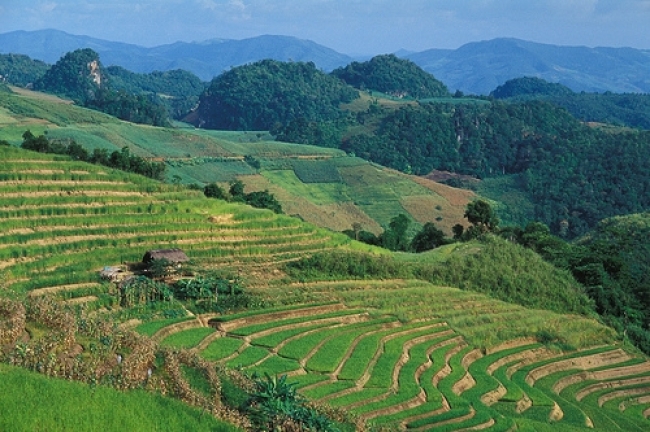 Li Kan is a warm, convivial man. He welcomes guests with a genuine pleasure, shooing the dogs and chickens from the concrete courtyard of the neat collection of brick-and-tile buildings that make up his home before offering chairs in the warm morning sun. At 52 years old, he is a thin, wiry figure with a lined face betraying both his years and the harshness of his youth. But it’s a face that lights easily with laughter. His wife bustles happily about, pouring glasses of green tea for the guests, and his father, a tiny gnome of a man, hovers about with a toothless grin and clear, twinkling eyes.

It wasn’t always like this. A mere decade ago, Li Kan’s family huddled in straw-thatched poverty, barely able to grow enough rice to feed themselves. They were completely without cash, without a future, and without hope, and the memories are too recent for comfort.

Li Kan’s roller-coaster farm of 2 hectares lies at an elevation of 1,340 meters, in Lancang County, Simao Prefecture, in the endless mountains of China’s Yunnan Province. He was one of the first to be caught up in a new green revolution that is spreading across Yunnan’s fragile mountain uplands, where an estimated 1 million people depend upon upland rice as a staple food. The revolution comes in the form of a new farming system, the key component of which is a collection of new upland rice varieties that have tripled yields, and more.

Already, the new system has lifted hundreds of thousands of farmers and their families out of poverty. Even more extraordinary is the fact that changes to upland farming systems on the scale being witnessed in Yunnan have rarely, if ever, been achieved before. The theory behind the transformation has long existed, but its practical application has frustrated agricultural authorities and scientists alike in many countries of the Asia Pacific region.

For thousands of years, the farmers of minority ethnic groups living in the highlands of countries such as China, India, Myanmar, Thailand, Lao People’s Democratic Republic (Lao PDR), and Vietnam have grown traditional varieties of upland rice in shifting cultivation systems. They cleared forest from mountainsides, grew their rice and other crops until the soil was exhausted or competition from weeds became intolerable, and then they cleared a new plot and moved, leaving the old one fallow.

This system was sustainable while the need for food was limited by a small population and cleared fields were able to lie idle for long enough to recover. But the population grew rapidly. Vast forested mountainsides were stripped bare with the need to grow more food and nature was not given enough time to rejuvenate them from the depletion wrought by food crops and tropical sun and rain.