Africa is labeled as a “poverty continent.” While respectable progress has been made in reducing poverty in other regions of the developing world, the number of African people living on less than one dollar per day has increased, especially in sub-Saharan Africa. The region, which includes countries in central, eastern, western, and southern Africa, is now the main focus of overseas development assistance. 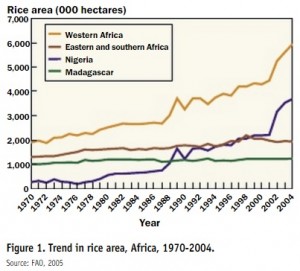 Rice is grown on 8.5 million hectares in sub-Saharan Africa (Figure 1) equal to 5.5% of global rice area. Almost all of the region’s 38 countries grow rice, but two countries, Nigeria and Madagascar, account for 60% of the rice land. Nine other countries grow rice on over 100,000 hectares, including Guinea and Côte d’Ivoire. In most of these countries, more than 40% of the population lives in poverty.

A shift in consumer preferences—driven by rapid urbanization and women’s growing participation in the formal labor force—away from traditional staples of cassava, sorghum, millet, and maize toward rice and wheat, combined with high population growth, means that rice demand is increasingly out-stripping supply. And, while per capita rice consumption in Asia is declining, it is growing in sub-Saharan Africa—where, in 1990-2003, rice consumption grew 3.2% per year compared with annual production growth of only 2.4%.

As a result, rice imports have grown rapidly. The share of imported rice relative to total rice consumed grew from 32% in 1990 to 45% in 2003, and the volume of imports increased 5.6%  per year. Sub-Saharan Africa now accounts for a quarter of the global import market and hosts some of the world’s largest rice-importing countries. In 2003, 11 sub-Saharan countries imported more than 200,000 tons of rice, with Nigeria importing 1.64 million tons, up from 224,000 tons in 1990.

The consequently large expenditure on rice removes financial resources that could otherwise be used to fund much-needed infrastructure development. Therefore, many African governments are now looking to increase rice production, to both enhance food security and save foreign exchange (or currency).

However, efforts to increase rice production and productivity have had limited success, despite many governments protecting their domestic rice industries with high import tariffs. The area planted to rice increased from 3.5 million hectares in 1970 to 8.5 million hectares in 2004, but the average rice yield remains low at 1.5 tons per hectare (t/ha)—40% of the average yield in Asia. Yields have barely increased over the past three decades—a period when the Green Revolution contributed greatly to food security in Asia with minimal expansion of cultivated area.

The main constraint to increasing rice productivity in Africa is the dominance of unfavorable rice-growing environments. Just over half of Asia’s rice is grown in irrigated conditions, whereas only 10% of Africa’s rice area is irrigated. In African countries where rice is grown mostly in irrigated lowlands, yields, at more than 4.5 t/ha, are comparable with those of Asia. But the predominant ecosystem in Africa comprises uplands with infertile and toxic soils—an ecosystem in which Asia, too, has failed to significantly increase productivity.

Rice is uniquely adapted to flooded lowland ecosystems where soils are less fragile and crops respond to improved management, particularly the optimized application of nutrients. The development of profitable lowland rice technologies should therefore be a central element in increasing African rice productivity and production. There is vast potential for expansion of lowland rice cultivation in inland river valleys in sub-Saharan Africa. This should be explored if rice is to contribute to reducing African hunger and poverty.