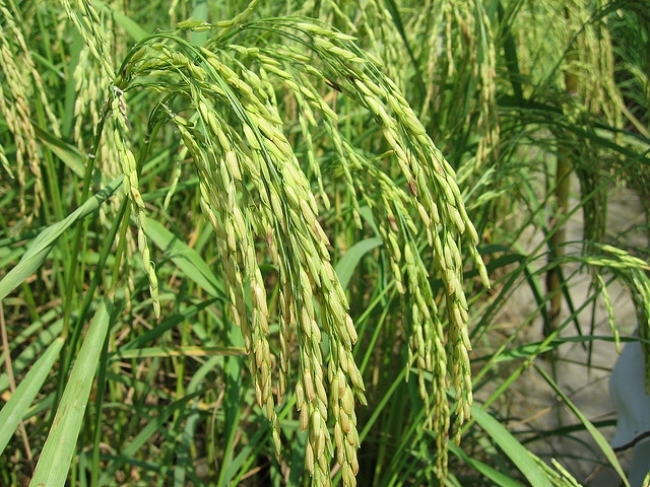 Rice improvement efforts supported by the International Rice Research Institute (IRRI) have recently proven their worth in what is virtually sacred territory: they have led to the development of a new disease-resistant variety of Thailand’s famous long-grained jasmine rice—arguably the finest and most popular rice in the world.

Thai jasmine rice comes from a traditional plant that is commercially viable only when it is grown in its home soil, on the poor rainfed farms of Thailand’s north and northeast. It goes by the name KDML105, short for Khao Dawk Mali—in Thai, “jasmine flower rice.”

It is a tall, weak-strawed plant that is prone to lodging, is vulnerable to climatic stresses in an environment notorious for both flood and drought, and falls easy victim to pests and diseases. It is particularly vulnerable to the destructive fungal disease blast, which is an endemic problem in Thailand (and many other countries; see Beating blast). On top of all this, it is a low-yielding variety.

Yet, its long translucent grains, incomparable fragrance, and distinctive cooking quality make it one of the world’s most sought-after varieties.

It was first offered to Thai farmers in 1959 after a research effort in the mid-1950s to find the “best” of the country’s jasmine rice varieties. For almost half a century, small farmers with plots averaging little more than 1.5 hectares have fatalistically shouldered the huge risks of growing a weak monocrop in an environment laden with threats. Since the 1970s, the vast majority of farmers have grown only two other varieties of rice, RD6, a glutinous variety that they use for home consumption, and RD15, another jasmine variety of slightly lesser quality than KDML105. All are equally prone to climatic stresses and diseases.

The new variety will do away with much of the risk because it has strong resistance to blast—the bane of Thai rice farmers.

But the “sacred” nature of the traditional crop and the prospect of a successful newcomer have sparked an intriguing controversy in a country where the government has announced wide-ranging plans to modernize both its farm production and the marketing of agricultural produce.

Millers and exporters, the middlemen in Thailand’s tradition-bound marketing system, have complained that their orders are based solely on the name KDML105. They say nothing else  should take its place or the country will risk squandering its reputation for quality on the world rice market.

Their reaction comes at a time when Thailand’s Commerce Ministry has warned the country’s rice marketers against “blending” the premium KDML105 with grain of lesser quality. The ministry was referring to a known practice of adding a percentage of irrigated rice, such as Pathum Thani 1, to shipments of jasmine rice, to boost financial returns. Pathum Thani 1 has grain almost identical in appearance to KDML105, but with an inferior fragrance. The Commerce Ministry has threatened to revoke exporters’ licenses if they’re caught blending.

The related clamor over the new blast-resistant jasmine variety means it has not yet been given a name. Millers and exporters suggested that it should also be called KDML105 to overcome marketing problems, but this is impractical from the viewpoint of researchers and farmers. Researchers, who fear the millers will offer a lower price for grain from the new variety, thereby dissuading farmers from growing it, say the official naming may have to wait upon the Department of Agriculture.