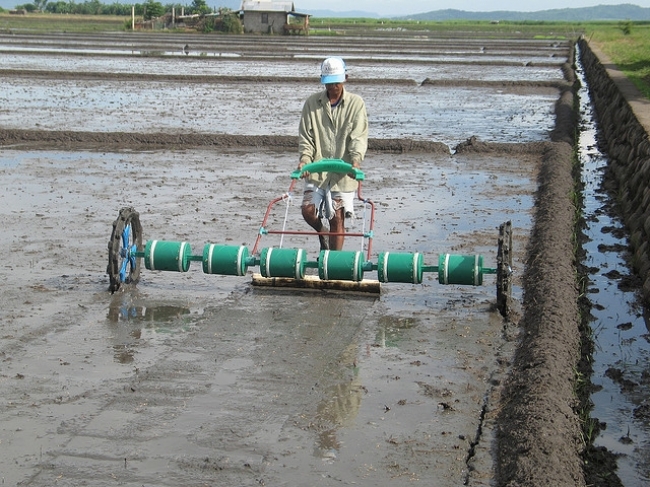 A PLASTIC DRUM SEEDER holds six or eight perforated cylindrical drums housing pregerminated seeds that are dropped in rows as the seeder is easily pushed or pulled along by a single person — like Filipino farmer Jimmy Gonzales — at walking pace. (Photo: Ma. Romilee Bool)

Almost 90% of the 11 million hectares of rice that are planted each season in Bangladesh is transplanted — seedlings are grown in nurseries then moved to the field. It is a heavily labor-intensive process, requiring nearly half-a-billion person-days across the country. In the past, rural laborers abounded, but increasing labor out-migration to city areas and a shift towards alternative rural employment has seen a severe shortage of hands available for transplanting rice.

This scarcity of farm workers is hurting Bangladeshi rice farmers on several fronts. The most obvious impact is an increase in labor costs. Also, the optimal planting periods for the boro (dry) and aman (wet) seasons are relatively short. A lack of workers means not all farmers can plant their rice on time. Delayed planting leads to late-maturing rice, increasing the risk of crop losses at the tail end of both seasons— due to hailstorms or flooding from rain during the boro season and due to drought during the aman season. These factors, combined with increasing costs of other inputs and a falling or stagnant market price for rice, are diminishing the economic viability of rice production in Bangladesh.

But a simple, inexpensive piece of equipment has the potential to change the face of rice farming across the country. The drum seeder is a lightweight device made from high-density plastic with a cost of around US$40 and a life of 6-8 years. Originally designed by the International Rice Research Institute (IRRI), improvements by researchers and manufacturers in Vietnam have substantially reduced the weight, cost and usability of the device. It consists of six to eight cylindrical drums along a central axis. Each drum is studded with holes through which pre-germinated seeds drop neatly in rows on puddled soils as the drum seeder is pulled along. The drums are supported by a large plastic wheel at each end, allowing the whole system to be easily pulled along by a single user at walking pace. Drum seeding has already had success in  Vietnam as a seed-saving strategy, but its capacity to save labor is profound: while it may take up to 50 person-days to transplant 1 hectare of rice, direct wet seeding with a drum seeder takes barely 2 person-days.

Bangladesh’s first drum-seeding trial, conducted during the 2003 aman season — a collaboration between IRRI and the Bangladesh Rice Research Institute (BRRI), funded by the International Fund for Agricultural Development (IFAD)— was a comprehensive success. In the trial, led by M. Zainul Abedin, Farming Systems Specialist in IRRI’s Social Sciences Division, and  implemented by BRRI Chief Scientific Officer Musherraf Husain and participating farmers, drum seeding resulted in an average 18% higher yields and 6% reduced costs compared with transplanting, and drum-seeded crops matured an average 10 days earlier. What’s more, drum-seeded rice gave an average gross return 21% higher than for transplanted rice. This translates to more than double the average profit — a boost of around $120-150 per hectare per crop.

All those involved saw the technology as cheaper, requiring less labor, producing higher yields and resulting in better plant growth. The only areas of concern were the potential cost of acquiring a drum seeder, uncertainty over availability, and weed management.