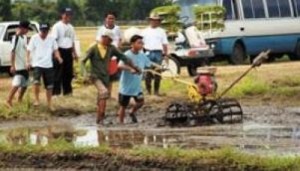 Rice and agriculture are still fundamental to the economic development of most Asian nations, not to mention their cultural and social identities. The rice industry has been a foundation of the Asian way of life for generations. In much of Asia, rice plays a central role in politics, society, and culture, and directly or indirectly employs more people than any other sector.

A healthy rice industry, especially in Asia’s poorer countries, is crucial to the livelihoods of rice producers and consumers alike. Farmers need to achieve good yields without harming the environment so that they can make a good living while providing the rice-eating public with a high-quality, affordable staple. Underpinning this, a strong rice research sector can help reduce costs, improve production, and ensure environmental sustainability. Indeed, rice research has been a key to productivity and livelihood gains over the last four decades.

But, in recent years, one major problem has emerged that threatens to halt this progress: the young people of Asia don’t want to work in the industry. And they have support—many existing rice farmers, having experienced for themselves the unforgiving life that often defines farming for a living, are encouraging their children to leave the land for careers in burgeoning urban and industrial sectors. Even fewer young Asians are choosing careers in rice science, despite its vital importance to the region.

However, an innovative project launched in April in Thailand and the Philippines marks the start of a major new effort to encourage young Asians to consider a future in rice.

“It’s a sad fact of life in modern Asia that many young people in the region don’t think of rice as offering an exciting or promising career, so they focus on other industries and other careers,” says Robert Zeigler, director general of the International Rice Research Institute (IRRI).

On 24–28 April 2006, IRRI, together with the Thai Rice Foundation under Royal Patronage and Philippine Rice Research Institute (PhilRice), hosted 19 high school students, aged 16–18, from Thailand and the Philippines at a “rice camp,” designed to boost their interest in rice and science.

The nine Filipinos and ten Thais—all from rice-farming families, they were selected because of their interest in, or knowledge of, rice—spent 5 days at IRRI’s Philippine headquarters learning about the latest rice research and, more importantly, how rice research can provide a brighter future for rice production and, consequently, peoples’ livelihoods in Asia.

Dr. Zeigler emphasizes that, if the rice industry is to continue to develop in Asia, the rice industry must attract the region’s best and brightest young people. “We want them to understand that rice research is not some sleepy little scientific backwater, but is, in fact, right on the cutting edge of  international scientific activity,” he says. “The recent sequencing of the rice genome attracted enormous international attention, especially among the scientific community, yet most young Asians still don’t know it even happened, let alone understand its implications for the food they eat each day.”

During their 5 days at IRRI, the students, who were accompanied by their teachers, tried their hand at several laboratory techniques such as extracting DNA from a rice plant and inserting a gene into the rice genome. It wasn’t all air-conditioned labs, though—they also had the chance to get their hands dirty, preparing a field for rice transplanting.

One of the camp’s biggest successes was the camaraderie that blossomed among the students. Despite sharing little language, the young Thais and Filipinos struck up friendships that look set to last well beyond the 5-day camp. IRRI has created a Web site where the students can communicate and post photos.

According to IRRI Spokesperson Duncan Macintosh, the chance to mix with people from different cultures also provided some comic moments.

“At dinner one night,” recounts Macintosh, “one of the Filipino boys boldly challenged one of the Thai boys to a chili-eating competition. After gulping down three chilies in the time it took the Thai lad to eat one, the Filipino proclaimed victory—prematurely, as it turned out. Within a minute or so, the Filipino had turned red and tears were streaming down his face as he guzzled water. Meanwhile, the Thai student calmly ate his second, then third, then fourth, then fifth chili. The rest of the students were in stitches.”

Macintosh added that the Filipinos got their revenge later, when they challenged the Thais to eat Filipino balut. While the Filipinos savored the delicacy, the Thais gagged and spluttered on the fertilized duck egg with a nearly-developed embryo inside.

Kwanchai Gomez, executive director of the Thai Rice Foundation, expressed hope that the students returned home with a new sense of excitement about rice and its potential both in science and in the future development of Asia.

“Rice has played a vital role in Thailand’s economic development, not to mention its history and culture,” says Dr. Gomez. “The challenge is to try to translate this into a sense of excitement and interest amongst young people in Thailand and all over Asia.”