With her crop surviving nearly two weeks of submergence and recovering from an intense flood,  Mrs. Devi had every reason to smile and be proud of her decision to plant a stress-tolerant rice variety. 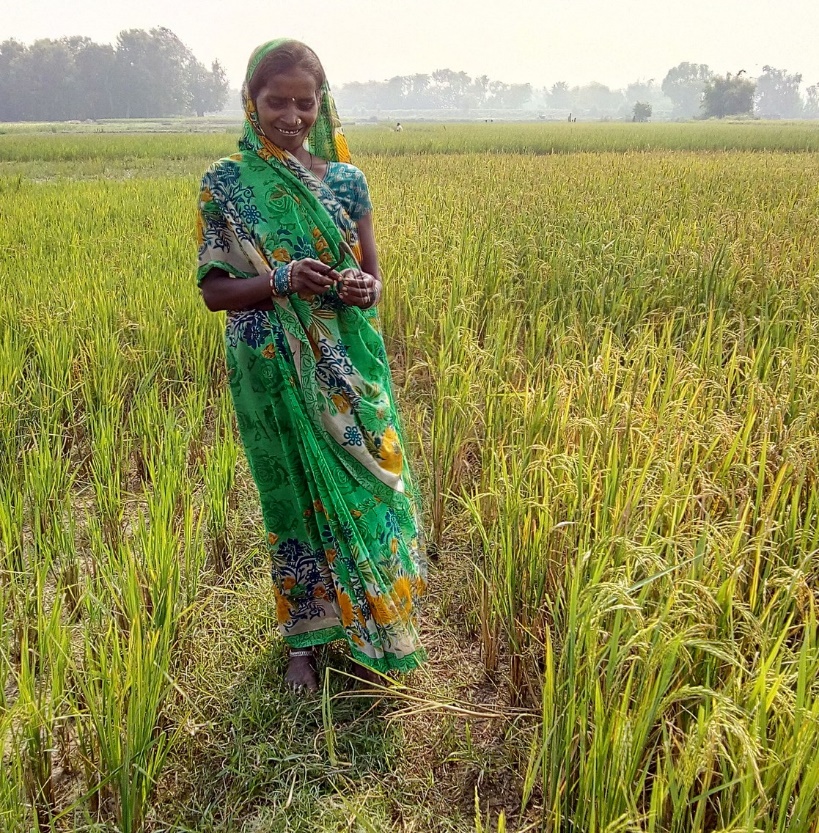 Sohabati Devi looks at her BINA dhan-11 rice crop that recovered from a devastating flood and ready for harvest. (Photo by Abha Singh)

Sohabati Devi, a 35-year-old farmer from Dodhghat Village in the Maharajganj District of Uttar Pradesh, has been running a large household comprising of her eight children and her aging father-in-law. Her oldest son is 18 years old and her youngest child is a one-year-old boy. Her husband, being a seasonal migrant worker, is often away from home. To support her family, she looks after the farming operations with some support from her father-in-law and older children.

Instead of hiring farm laborers, Mrs. Devi herself works in their fields where she grows rice, wheat, potatoes, peas, pulses, and vegetables during the kharif and rabi seasons. Their harvest is for both family consumption and sale to the market.

Unexpected calamity
She was approached by a local non-government agency (NGO) to participate in the drought-tolerant rice variety promotion initiative facilitated by the International Rice Research Institute (IRRI) with the support of the state government of Uttar Pradesh.

“After being oriented about the new stress-tolerant rice varieties I decided to plant BINA dhan-11,” said Mrs. Devi

BINA dhan-11 is a medium-duration (110–135 days) high-yielding variety that is tolerant of flooding. The farmers in the region have been used to growing medium-duration varieties under rainfed conditions where intermittent dry spells due to scanty rainfall is a common phenomenon. In recent times, BINA dhan-11 has been generally selected for its higher yield potential.

The selection of BINA dhan-11 proved to be a prudent choice when the farms of Mrs. Devi and her neighbors were deluged with raging floodwaters in August during the 2017 kharif season. The flood was caused by the excess water flowing down from high-altitude areas of neighboring Nepal, which had experienced heavy rains. Entire low-lying fields and villages in Maharajganj and adjoining Gorakhpur were swamped with water up to 1.8 meters deep causing severe damages to the region’s entire transplanted rice crop. The rice crop planted only 5–6 weeks earlier would probably have a slim chance of surviving the high levels of flood water.

The farmers were caught completely unaware and unprepared as the unforeseen calamity, which came at midnight, brought widespread destruction and sorrow.

“This kind of flooding had never been experienced for at least the last two decades,” said Mrs. Devi.

Mrs. Devi was able to timely transplant her BINA dhan-11 in spite of the somewhat late arrival of the monsoon. However, she never anticipated the climate change-induced flooding that completely submerged her crop just a month and a half later. 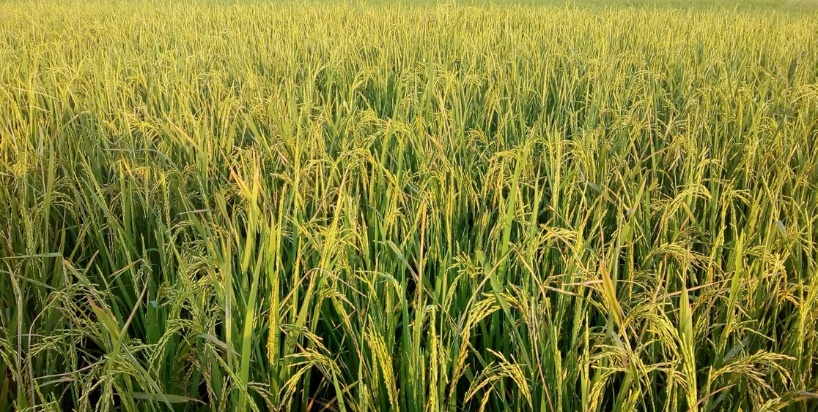 BINA dhan-11 is a medium-duration, high-yielding, flood-tolerant rice variety that is helping farmers like Mrs. Devi cope with the pressures of climate change. (Photo by A. Singh)

From despair to hope
Bitterly disappointed like many of her neighbors, Mrs. Devi had lost all hope of adequately providing for her family in 2017. She and her father-in-law visited the family’s flooded field the following morning to assess the damage to their rice and vegetable crops.

It definitely didn’t look good for the vegetables, but what about the rice?

After 12 days, when the water had receded, Mrs. Devi and a local NGO representative went to survey her fields and evaluate the damage. Her despair suddenly changed to hope when she saw that 40–50% of the rice plants were still green although the rest appeared to have been badly affected. Local experts recommended immediately applying fertilizer to the surviving plants.

“With USD 2.00 worth of fertilizer applied to my field, I noticed within a few days that my crop was gradually recovering,” she said. “It was more like an astounding miracle that I was able to harvest her crop with a yield of 3.7 ton per hectare by the end of October.”

With her crop surviving nearly two weeks of submergence and recovering from such an intense flood, the BINA dhan-11 seeds were a true blessing for Mrs. Devi. Looking at the brightly colored grains of her harvest, she had every reason to smile and be proud of her decision to plant a stress-tolerant rice variety. She invited other farmers to visit her plot to see first-hand the incredible performance of BINA dhan-11 under flooded conditions.

The few kilograms of seeds supplied through the local NGO were more than just a handful of seeds for Mrs. Devi. They had provided her with the means to cope with the impact of climate change. She now has an additional source of income to supplement the remittances of her husband hopefully for many more growing seasons to come.
________________
Ms. Nayak is the lead agricultural research and development specialist in the Seed & Delivery Systems Cluster at IRRI India. Ms. Saksena is a communication specialist for the Stress-Tolerant Rice for Africa and South Asia project in India. Dr. Dar is the lead of the Seed & Delivery Systems and Germplasm Evaluation Cluster at IRRI. Ms. Singh is a former IRRI consultant.