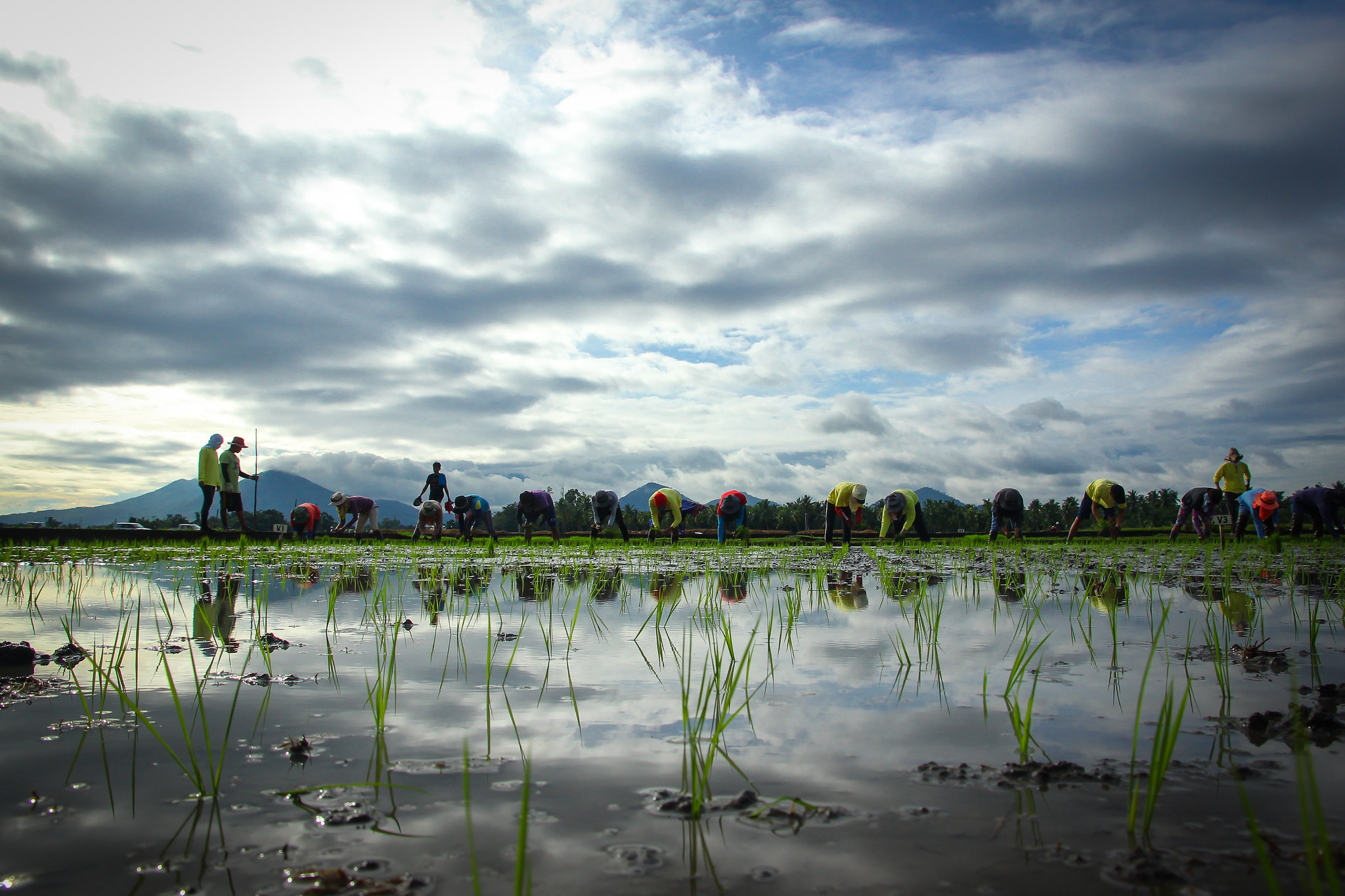 Soil organic carbon is an important component of the global carbon cycle as it constitutes the largest pool of terrestrial carbon, which is approximately two and three times that in the atmosphere and vegetation, respectively. Intensive cropping systems are typically depleted of soil organic carbon, containing 25-75% of that in natural ecosystems. Hence, there is vast potential and need to increase storage, i.e., the sequestration of carbon, in these systems through the implementation of best-fit management practices depending on local conditions.

The role of soil organic carbon in lowland flooded rice soils has not been prioritized because the potential to sequester carbon in these ecosystems has been considered to be less important compared with the need to reduce methane emissions for climate change mitigation. However, global efforts are increasingly promoting soil organic carbon sequestration in support of the United Nations Sustainable Development Goals to enhance food security and mitigate climate change. 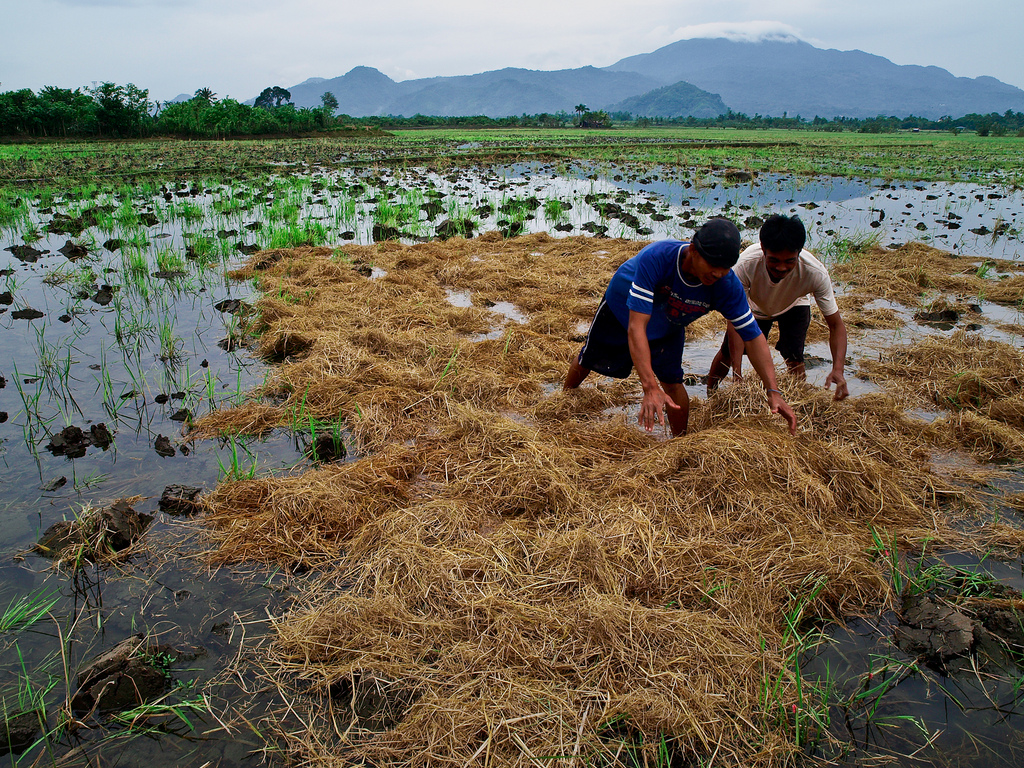 Farmers incorporating rice straw into the soil. Rice straw incorporation into the soil is among the management practices that increase soil organic carbon in lowland rice and is considered important for recycling nutrients. (Photo by I. Serrano, IRRI)

Dynamics in rice soils
Rice straw incorporation into the soil is among the management practices that increase soil organic carbon in lowland rice and is considered important for recycling nutrients. Straw incorporation is advisable over rice straw burning as the latter results in a complete loss of carbon in the straw to the atmosphere mostly as carbon dioxide. However, given the low quality of rice straw, as indicated by the wide carbon-to-nitrogen ratio, its incorporation likely renders nitrogen to be inactive making it unavailable for plant uptake. This can affect the growth of the subsequent crop. In many cases, additional nitrogen has to be applied to overcome this unavailability of nitrogen to plants.

Secondly, the decomposition of organic matter under submerged conditions results in the formation of phenolic compounds, which also affect nitrogen availability and crop growth.

Greenhouse gas emissions in lowland and upland rice soils
Lowland rice is grown mostly under submergence in semi-aquatic conditions making the soils notably different from upland soils. The dynamics of soil carbon, nitrogen, and other nutrients in lowland soils also differ from upland soils. Organic matter decomposition in submerged soils is slower than in upland soils. This is because the decomposition of organic matter under submerged conditions is largely anaerobic and results in the production of methane compared to mostly carbon dioxide gas under aerobic conditions.

Lowland rice contributes about 10% of the global anthropogenic methane gas emissions in the agriculture sector. Methane is a potent greenhouse gas with a global warming potential that is 28 times higher than carbon dioxide. An even more potent greenhouse gas produced under anaerobic conditions is nitrous oxide with a global warming potential that is 265 times than that of carbon dioxide. However, the quantities of nitrous oxide emissions are low when the fields are continuously flooded. Nonetheless, it remains an important greenhouse gas to consider in submerged rice fields. Thus, the carbon footprint caused by the emissions of both methane and nitrous oxide gases must remain lower than the carbon sequestration of soil organic carbon for any management practice to be considered effective in mitigating climate change. 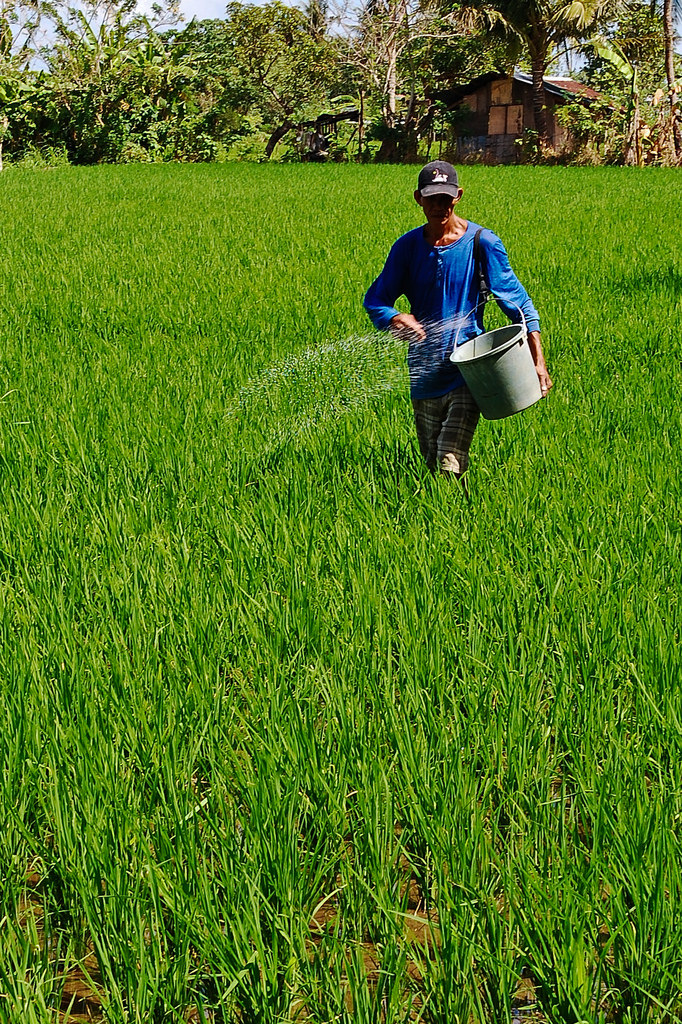 Many studies have shown that the application of fertilizers increases soil organic carbon. But a recent meta-analysis has also shown increased methane gas emissions associated with high rates of nitrogen fertilizers. (Photo by I. Serrano, IRRI).

Carbon sequestration and methane reduction: Striking a balance
The application of compost in rice soils has been shown to increase soil organic carbon content but also results in lower methane emissions than straw incorporation. Similarly, the addition of biochar has been shown to increase soil organic carbon because of its high carbon-to-nitrogen ratio which slows down decomposition in the soil. This results in lower methane gas emissions. However, there is a need to consider the scale at which this can be available for rice farmers. Addition of fertilizers increases rice yields and consequently increases the amount of residues, above and below ground, which serve as organic matter inputs to the soil.

Many studies have shown that the application of fertilizers increases soil organic carbon. But a recent meta-analysis has also shown increased methane gas emissions associated with high rates of nitrogen fertilizers. This poses a challenge on how rice production can improve yields and foster soil organic carbon sequestration while reducing greenhouse gas emissions. Finding the optimum balance for rice ecosystems remains fundamental.

Sequestration of carbon in lowland rice soils must be accompanied by a reduction in methane emissions to achieve genuine climate change mitigation. Thus, although sequestration of organic carbon in soils is important for mitigating climate change and improving soil health, the negative consequences that come with it should not be overlooked. A net reduction of greenhouse gas in the atmosphere should be the goal for any interventions that are purported to be climate mitigation strategies.

Climate change mitigation strategies should aim to answer these questions: Is it possible to simultaneously sequester carbon in rice soils and reduce greenhouse gas emissions? Can the carbon sequestration-greenhouse gas reduction benefits be achieved concurrently? Are we chasing contradictory aims?

Considering all these issues, dynamics, and realities careful analyses of the trade-offs and synergies between soil organic carbon sequestration and greenhouse gas emissions is a fundamental step in genuine climate mitigation. Otherwise, mitigation initiatives would remain to be square pegs in round holes.
____________________________
Dr. Chivenge is a soil scientist and Dr. Sander is climate change specialist at the International Rice Research Institute.