Africa’s dependence on rice imports is clearly no longer sustainable. In 2008, sub-Saharan Africa imported approximately 10 million tonnes of milled rice worth about US$ 3.6 billion. (Photo: R.Raman)

In view of the severe lack of capacity in rice production,which is throttling the development of Africa’s rice sector, participants at the Africa Rice Congress 2010 held in Bamako, Mali, in March 2010 called for a “Marshal Plan” (Africa’s “Marshall Plan” was largely inspired by the Europe Recovery Program, which was used to re-build Europe after the devastation caused by World War II)  to overcome this weakness.

Interestingly, the Congress highlighted that rice has become a strategic commodity that can potentially fuel economic growth and reduce hunger and poverty across the continent. Rice consumption in Africa is growing at 6–7% per year. To meet this demand, Africa imports close to 10 million tons each year, which is equivalent to one third of the rice traded in the world market, and this costs US$4 billion in foreign exchange.

“Our studies show that the continent has sufficient land and water resources and favorable growth environments to close the gap between Africa’s rice consumption and production, and that local rice production can be competitive vis-à-vis imported rice,” said Papa Abdoulaye Seck, AfricaRice director general.

He underlined that the capacity of national programs has to be strengthened with support from regional and international organizations. “There has to be increased technological innovations supported by an appropriate policy environment,” he added.

The Africa Rice Congress 2010, with a theme “Innovation and partnerships to realize Africa’s rice potential,” was organized by AfricaRice in collaboration with the national program—the Institut d’économie rurale (IER)— under the aegis of the Malian government.

A major part of the Congress was a forum on “Investing in Africa’s rice sector: opportunities and challenges,” in which ways to increase investments in the rice sector in Africa particularly through innovative public-private partnerships were explored. Issues such as the need to increase investments for increasing the area under irrigation, improving rural infrastructure, and introducing agricultural mechanization were raised. The forum featured exhibitions of machinery, inputs, and rice products.

During the opening ceremony, on behalf of Mali’s President Amadou Toumani Touré, Prime Minister Modibo Sidibé presented distinguished service awards to Drs. Jacques Diouf, Eugene Terry, and Kanayo Nwanze for their outstanding contributions to rice research and development in Africa during their respective terms as director general of AfricaRice.

Dr. Getachew Engida, AfricaRice Board chair, presented a plaque of appreciation to President Touré for his government’s tremendous efforts to raise rice productivity through the Presidential Initiative on Rice in Mali, which has led to a 50% increase in rice production in the country. Awards for the best presentation per theme, the best poster, and the Most Promising Young Scientist were also presented.

At the end of the Congress, the following key recommendations were made to boost Africa’s rice sector: 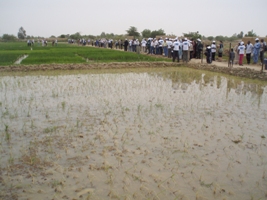