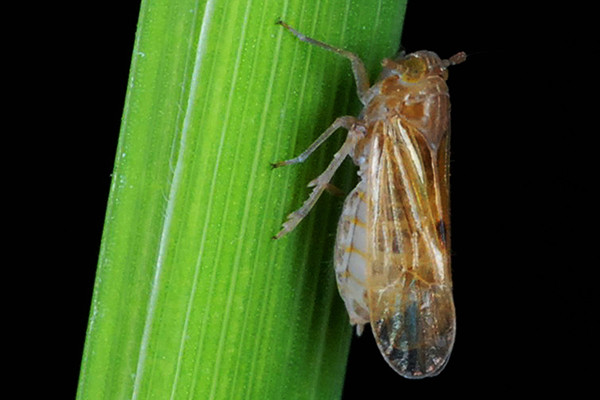 Brown planthoppers pierce the plant stem and suck out the sap. (Photo: IRRI)

In 2002, the Republic of Korea (South Korea) had four major problems in rice: blast, bacterial blight, cold stress, and brown planthopper (BPH)—the country’s most destructive rice insect pest. The job of the International Rice ResearchInstitute (IRRI) was to breed a new rice variety that is tolerant of these problems yet safe to the environment and for consumption.

Summer (mid-June to late August) marks another cropping season in South Korea. It also marks the arrival of BPH, which doesn’t survive the winter season. The BPH in South Korea comes from Vietnam and is brought to the country through mainland China, carried by summer winds and typhoons. 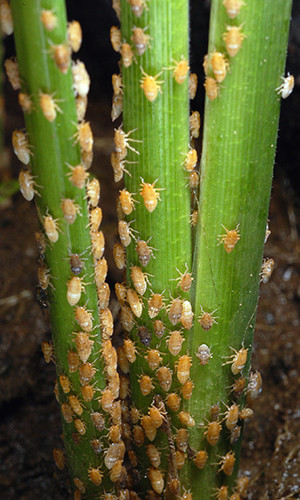 Brown planthoppers travel on the summer winds from Vietnam to Korea, wreaking havoc in rice fields along the way. (Photo: K. K. Jena)

A sap-sucking insect
BPH damages rice crops every year in many Asian countries, with estimated annual losses of 2–3 million tons across the region. The pest not only brings viral diseases but also sucks the rice plant to death.

Brown planthoppers pierce the plant stem and suck out the sap, carrying the plant food from the phloem cells, causing the rice plant to dry out, wither, and die.

Serious infestation causes hopper burn in rice fields and often results in complete yield loss. The most recent BPH attack in South Korea was reported in 2009 when 10 counties along the western coastal area of the Korean peninsula were hit at a high density of 20–40 BPH per plant.

Through the RDA, South Korea has been collaborating with IRRI since the 1960s to breed the temperate Japonica rice variety with the tropically grown indica variety. This produced the rice variety Tongil, which transformed Korea in the 1970s from a rice importer to a self-sufficient producer.

An anti-BPH “vaccine” gene
Rice plant resistance is the best strategy to control BPH, not the use of pesticides. So resistance became the focus of IRRI’s work in South Korea. Kshirod K. Jena, IRRI senior scientist and plant breeder, started the work on this in 2002.

The pest has evolved and become virulent to resistance genes that were introduced 15 years ago into rice varieties. Thus, scientists are in constant search for genes that can withstand BPH. In the case of South Korea, a search for the gene that has resistance to the new BPH population is important.

Dr. Jena and his Korean team then discovered a major resistance gene, Bph18, in 2005. This discovery is a major breakthrough in rice science because this gene has resistance to the kind of BPH that are swarming and harming rice fields in the country.

“The Bph18 gene enables rice plants to manufacture a protein that can protect them from BPH attack,” Dr. Jena said. A process he calls antibiosis is a defense mechanism in nature that plants use to combat insect predators. 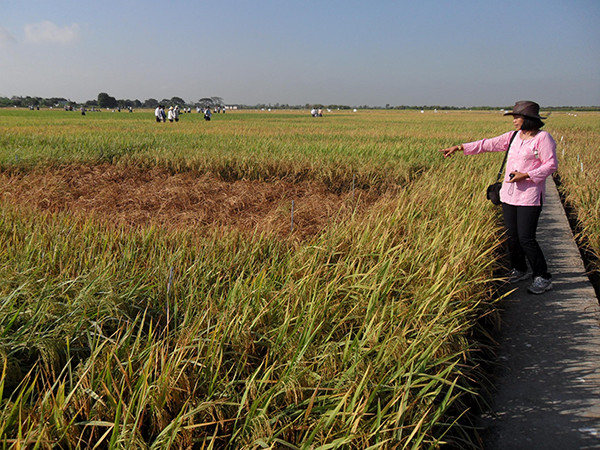 Another breakthrough
“Japonica rice is well suited to our temperate weather; that is why it is popularly cultivated by farmers,” Dr. Yeon-Gyu Kim, director of the Rice Research Division, National Institute of Crop Science, said. “This variety is readily available to the Korean market and is what our countrymen are used to eating. I can say that the market in Korea looks for round grain, a somewhat sticky rice that fits not only nutritionally but with our eating traditions.”

“Japonica rice has a narrow gene pool so it has a limited reservoir of resistance genes,” Dr. Jena related. “Indica rice, on the other hand, has a very wide gene pool.” He initially got the germplasm, which he developed with Dr. Gurdev S. Khush, as a Robert S. McNamara fellow of the World Bank, by transferring genes from wild rice species. The tricky part is that this gene is from an indica rice (IR65482-7-216-1-2), a rice variety that is popular in tropical countries, and not from the japonica rice greatly preferred by the Koreans.

“So, I thought instead of using the same cultivated rice genes for BPH resistance, let me try a new source of resistance,” Dr. Jena added. 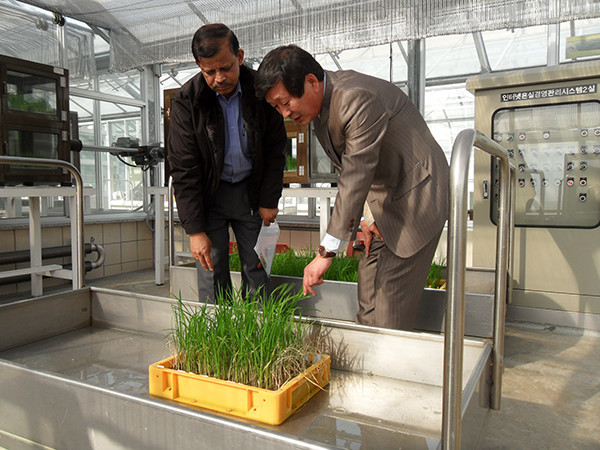 Luckily, in 2005, IRRI, in partnership with Japan, completed the rice genome sequence. The vast information from the sequence enabled the team to find the main traits of the new gene, which Dr. Jena identified for BPH resistance. It also helped develop a DNA marker, which will be 100% associated with the BPH resistance trait of the plant. He then introduced Bph18 to the elite japonica variety Junambyeo.

“That gave me the confidence to introduce that resistance gene from indica to their elite japonica variety,“ Dr. Jena mused. “We were able to do it in three backcrosses. We made the selection through DNA analysis to make sure that we were introducing only that resistance gene and not any other undesirable traits from indica rice. We were particular to the given order that everything else should be japonica except for the resistance to BPH.”

A faster way of breeding
“The progress of the work is fast,” said Dr. Jung-Pil Suh, scientist in the Rice Research Division, RDA. “We are very happy. We did three replicated yield trials and the performance of the line in these trials is outstanding. The whole population is uniform with the right panicle size, plant height, good response to fertilizer, and high yield. Most importantly, it has multiple resistance to diseases and BPH.”

Thanks to marker-assisted breeding and background genotyping, the usual 10 to 14 years of conventional breeding can now be completed in 6 years. In the case of Korea, it took only 2 years to identify the kind of rice plant [line IR83261BC3- 3-3-3-B (SR30071BC3-3-3-B)] that is suited for a local adaptability test. Replicated trials in different regions of the country were done in 3 years.

In other words, it took Dr. Jena and his Korean team of scientists only 5 years to breed and release a new rice variety, ANMI, which is a Korean word for safe and delicious rice. Officially released in South Korea on 6 December 2010, ANMI is highly resistant to BPH, blast, bacterial blight, and cold stress. This variety is also high yielding, very palatable, and looks glossy with a stickiness that is just right.

Dr. Suh is quick to add, “ANMI will greatly contribute to rice farmers who are engaged in eco-friendly farming. Because this new variety can fight insects, there will be fewer pesticides in the air. Plus, it provides stable cultivation because of its multidisease and multiinsect resistance.”

Fulfillment spelled out
“I felt fulfilled with the discovery of the gene and the release of the ANMI rice variety in South Korea,” Dr. Jena stated. “That’s why I am thankful to IRRI Director General Robert S. Zeigler and my colleagues in both IRRI and Korea. I am confident that ANMI will solve the four major rice problems not only in South Korea but also in other parts of the world. I can say that this is a legacy that I can be proud of and I am sure my colleagues will say the same.”