Fiona Hay and Maricar Alberto share their scientific journeys, their most significant achievements to date as rice scientists at IRRI, and the challenges along the way 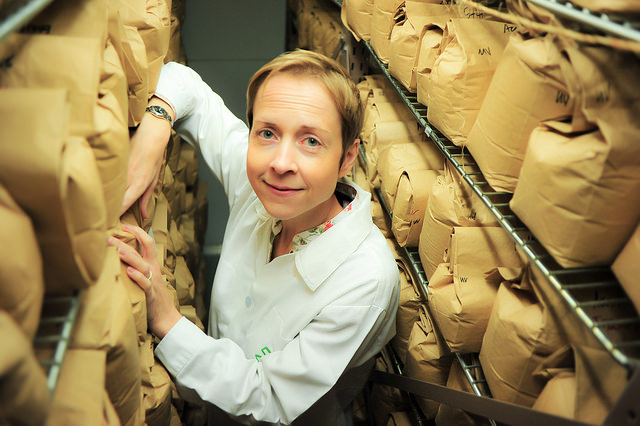 What really excites me is discovering something new, knowing it’s new scientific knowledge being generated, and knowing that it’s contributing to the whole understanding of how things work, says Dr. Hay (Photo: Isagani Serrano/IRRI)

International Women’s Day (IWD) is a global celebration of the social, economic, cultural, and political achievements of women. This year, IWD’s global theme, Be bold for change, highlights confidence during challenging times.

On 8 March, the International Rice Research Institute (IRRI) proudly joined the world in honoring the women in its workforce and their important roles and positive impact on advancing the institute’s mission of ending global hunger and improving the lives of farmers.

In this back-to-back interview, Fiona Hay, a seed physiologist, and Maricar Alberto, a climate change expert, shared their scientific journeys, which began when they were school girls, Dr. Hay in the UK and Dr. Alberto in the Philippines. Dr. Hay (FH) and Dr. Alberto (MA) also revealed their most significant achievements to date as rice scientists at IRRI—and the challenges they faced along the way.

Have you always known that you would be a scientist?
FH: No. I think, when you’re a child, the idea of being “a scientist” is quite abstract; it’s not clear what a scientist really does. What I did like when I was a child was collecting seeds from the garden. I collected the seeds and liked to store them in little packets. I had an interest in seeds at an early age.

As a teenager, I liked the plant science side of the biology that we were studying in school. I remember reading my Mom’s and Dad’s newspaper about a new journal coming out, Plants Today. I asked them if they could get it for me. It was quite a random thing but they subscribed to this journal for me! It covered a range of topics but was easy to read and understand. An article on seedbanking talked about modeling seed longevity. Since I had an interest in math, I found it amazing that one could describe populations of seeds according to mathematical equations. That’s where the interest came in—and that led to understanding more about seedbanking.

I also wanted to go seed collecting. I liked the idea of seed collecting before I knew that some people actually did that for their work. I went on to do a plant science degree at Manchester University and, when I had an industrial placement year, I said I wanted to work at a seedbank. That’s how it all happened. I worked in a seedbank and stayed on and did my PhD. During my PhD, I went to the International Crops Research Institute for the Semi-Arid Tropics (ICRISAT), in Niger, and went seed collecting and I thought, oh, this is what I wanted to do.

MA: Yes. I think I’ve always known I would be a scientist. Since grade school, my favorite subject was science. Even in high school, all science-related subjects interested me. I was, and still am, always curious to know the why and how of things around me. I can say that I had an inclination toward science since I was a little girl.

Why did you choose to work at IRRI? Why rice?
FH: My interest was more to do with the specific work of the genebank. The seedbank that I worked at in the UK was a wild species seedbank for conserving species. I knew about crop genebanks, the parallels, but it was really seeing a job advertisement that mentioned seed longevity that attracted me to IRRI. It was a matching of interest. It was great coming here and seeing the differences between the wild species seedbank and a major crop genebank. Last year, a list of top genebanks to visit came out. In the top 10 of about 1,750 genebanks were the IRRI genebank and the Millennium Seedbank that I worked at in the UK. Not many people have a background that includes working in both a wild species seedbank and a crop genebank. It’s quite useful having them both. 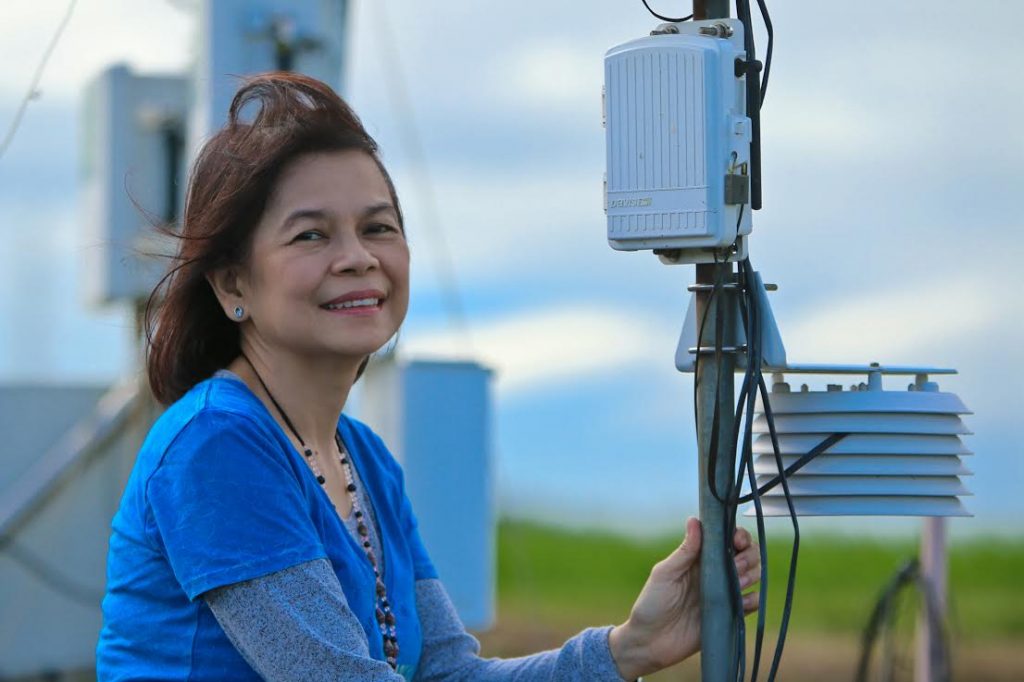 Women scientists are systematic, well-organized, hard-working, articulate, scholarly, and can balance life with work, according to Dr. Alberto. (Photo by Isagani Serrano/IRRI)

MA: For me, it was not a long journey to work at IRRI because I graduated from the University of Sto. Tomas (UST) in Manila in 1982 with a degree in chemistry. At that time, IRRI was already popular among university graduates. Everyone talked about IRRI as a nice place to work. In fact, several chemistry graduates from UST had already worked here in the soil microbiology, soil chemistry, and agronomy departments. In addition, I wanted to work far from home as I had always been with my parents. So, when I saw the newspaper ad that IRRI was in need of a chemist, I immediately applied for the position. Fortunately, I was hired as a research assistant in the soil chemistry department in January 1983. I was fresh out of college. I don’t know whether I was inclined to rice but I know that as a young graduate I was attracted to IRRI. I was also drawn to the beauty of Los Baños. This is where I have built my home with my husband and raised our children.

What is your work’s focus at IRRI?
FH: When I came in 2009, the first thing I had to do was to build up a team to research ways in which we could optimize genebank processes. My task was to gather evidence and, when necessary, make changes in how we did things in the genebank.

MA: I’ve been involved in several projects since I joined IRRI. Right now, I am working with the Rice and Climate Change group, which covers various aspects of adaptation and mitigation strategies in rice-based production systems against the changing climate.

What do you like best about what you do?
FH: There are two things I like best about my job. One is seeing my staff grow and having students go through a PhD program and seeing them succeed in becoming a scientist. The other thing that really excites me is discovering something new, knowing it’s new scientific knowledge being generated and then (I hope) published, and knowing that it’s contributing to the whole understanding of how things work. 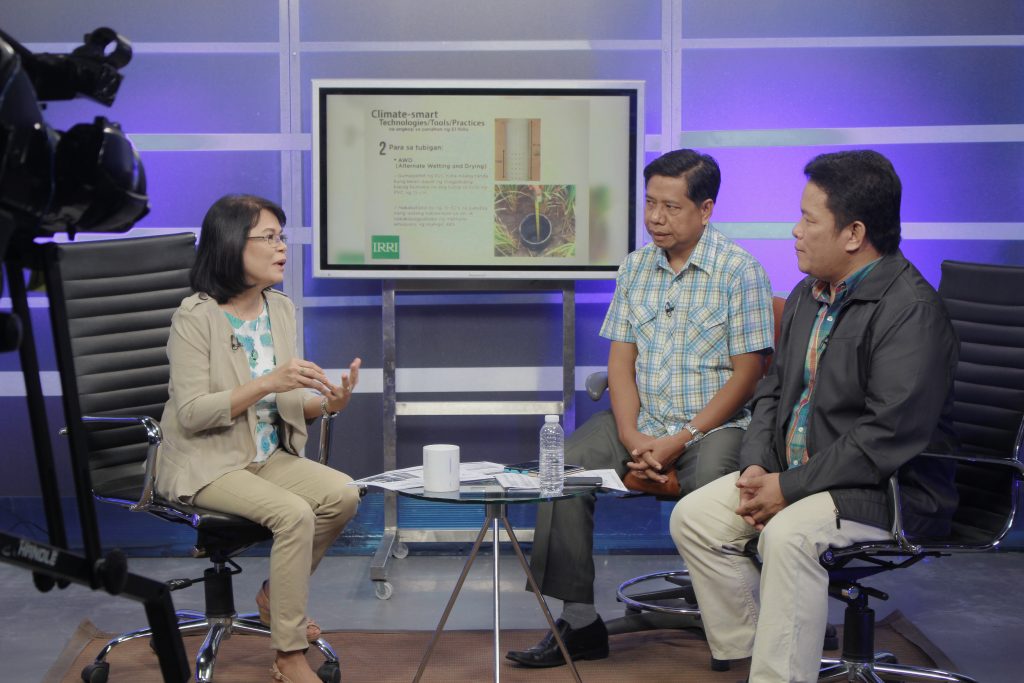 MA: I like writing research articles for publication in international journals the most. This means so much to me because I believe that I am leaving something that others could build on. Another exciting task is the opportunity to represent IRRI during media interviews, international conferences, and meetings. I know this is a good way to share IRRI’s work with the broader community.

What are the best things and the challenges of being a woman scientist?
FH: I don’t really like the question because it implies that I understand what it’s like to be a male scientist! Also, different character types exist, regardless of gender. But, I can think of an instance when somebody came to my office to talk with me who was totally flabbergasted that I was a woman. The person was really taken aback. I guess some cultures are not yet used to having women scientists and that can be a challenge. But, in general, it’s not really an issue. The most obvious difference is when you become a mom—when there are practical issues, such as having to express milk at work, and you don’t think about research so much since your mind goes to the child—but I’m sure that’s true of men, too.

MA: Based on my experience as a soil chemist, the best things about women scientists are that they are systematic, well-organized, hard-working, articulate, and scholarly, and women can balance life with work.

Can you name your biggest achievement and the biggest challenge at IRRI?
FH: The biggest challenge at the start would be to just get things going! You have to find out how things work in a different place, building a team, training. Working on a new species and learning about that species was a bit of a challenge. There’s just a lot of learning. In terms of achievement, in the new seed facility for the genebank, we have a new machine, a seed sorter. It is custom-built for IRRI and represents a significant step in introducing automation.

MA: For almost 23 years of working at IRRI, I have been conducting research in the field, greenhouse, and laboratory. All this time, I have kept a low profile although I have published research articles in international journals and presented our findings in both local and international conferences. My biggest challenge was balancing my time between my work and raising my family.

In 2006, Dr. Achim Dobermann (then IRRI deputy director general for research) sent me to the AsiaFlux training course on micrometeorology in Tsukuba, Japan. Although the training was far from my field of expertise, right after the training, I was able to set up the different sensors of the eddy covariance system (ECS) at IRRI. Dr. Reiner Wassmann (IRRI climate change specialist) suggested that I make my first flux measurements over flooded and nonflooded rice fields to make a comparative analysis of their microclimates and ecosystem exchange of CO2 and energy fluxes. I realized then that setting up and running the ECS was not enough. I needed more guidance to interpret all the data generated. The scholarship I got, through the Japan Society for the Promotion of Science Ronpaku PhD research program from 2008 to 2013, gave me an opportunity to interact with experts on flux measurements such as Dr. Akira Miyata (National Institute for Agro-Environmental Sciences, Japan) and Prof. Takashi Hirano (Hokkaido University), who served as my advisers and mentors. I was also given a chance to present the outcomes of our research in several international AsiaFlux workshops through funding assistance from the Asia-Pacific Network for Global Change Research and AsiaFlux. To date, I have published seven flux papers in international peer-reviewed journals.

How important is it to be bold in your work as a scientist? 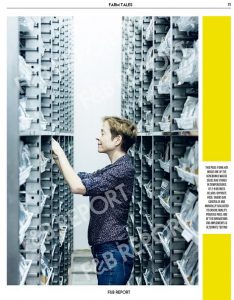 FH: To be bold is to be open to opportunities. I think that’s especially important when working on a crop like rice. There’s so much opportunity to build on what is already known, for instance, in using the 3K genome data. In the past, the thought of working with hundreds of accessions of one species was unthinkable. But, at IRRI, it’s possible to work on a large number of accessions. For example, my team is working to better understand the genetic basis of seed longevity, among other things.

MA: As a scientist, it is important that we are bold enough to strengthen our technical skills, broaden our knowledge, exchange ideas with senior scientists, write papers for publication, and present our findings to the international community.

What is your advice to young women who want to become scientists like you?

FH: The best thing is to be there. Acknowledge that there are knocks somewhere along the way but keep pushing forward.

MA: If you are aspiring for something, don’t be afraid to give it a try! I have been a working mother for almost 30 years and all my three sons are now professionals. My journey may be long and slow but I have enjoyed every step of the way because I was not alone. I have shared it with my loved ones.

Ms. Lamigo-Rosellon is a communication specialist at IRRI.