INIA has worked closely with CIAT and FLAR in developing new varieties suited for one of the most southerly rice-growing countries in the world. 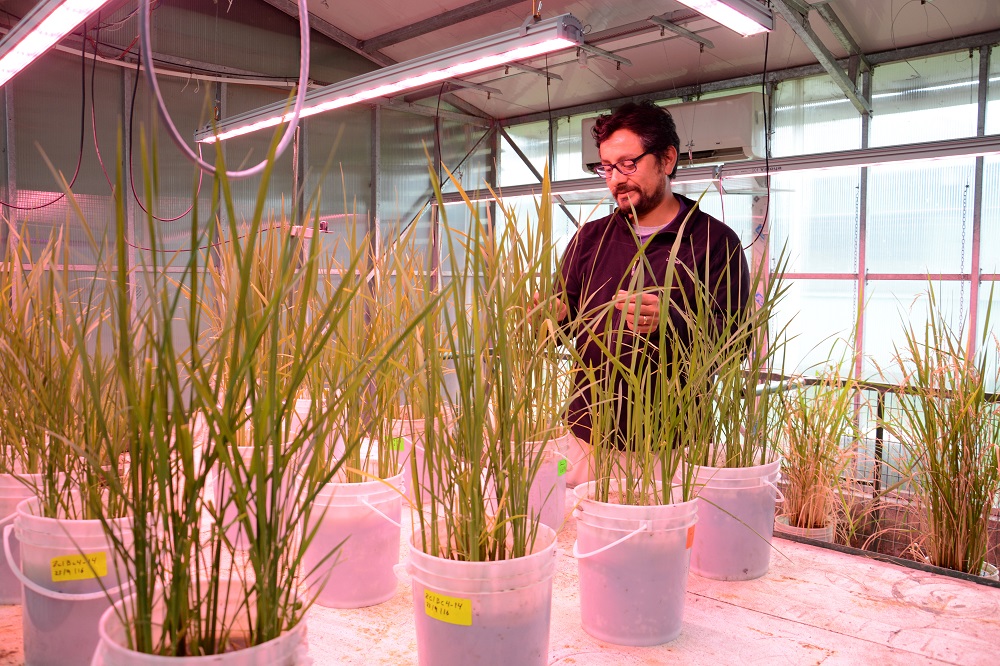 Diamond, Amber, Quartz, and Sapphire: this collection of “jewels” is not kept in a bank vault, but sown in the cold soils of Chile, the country hugging the southwestern coast of South America. These are some of the rice varieties (named after precious stones) that are grown in the country.

With fields at 36.5 degrees south of the Equator, rice growing in Chile is considered to be one of the most southerly in the world. These varieties are able to resist temperatures as low as 5 degrees Celsius at planting time and wait patiently in the soil to germinate when the temperature rises to 12 degrees Celsius.

But what characteristics make these varieties the jewels in the crown?

The type of grain that these temperate japonica varieties produce is long, wide, and adapted to the taste of most Chileans, who consume up to nine kilos of rice per person annually. Chileans prefer their local product even though the market has cheaper imported rice with long, narrow grains.

Timing is everything
In addition to a germplasm tolerant of low temperatures and using certified seed, the farmers have another ace up their sleeve to ensure successful production of up to nine tons of rice per hectare: the planting time.

Abel Concha is a 73-year-old veteran farmer. In the 50 years that he has been growing this cereal grain, he has witnessed the difficult work involved in producing rice so far south. He knows the ideal time to plant is from 1 to 19 October so that the crop has optimal meteorological conditions to develop and for the grain to mature.

It is possible to plant as late as 6 November, but the risks are greater. What Mr. Concha definitely avoids is planting after 7 November when the likelihood of crop failure is very high because temperatures can drop to less than 2 degrees Celcius, cold enough to kill the flowering rice plants.

Chilean rice producers have found that water can be an ally for reducing the impact of low temperatures. Those who plant late maintain an almost permanent layer of water in the field during the early stages of development of the crop to create a buffer effect so that the ground does not become as cold as the air.

“The thermal variation facilitates rice production because the cold nights are compensated for by the hot days and high daytime solar radiation with temperatures that can soar to nearly 28 degrees Celcius,” said Rodrigo Avilés, director of Quilamapu Regional Research Center under the country’s Institute of Agricultural Research (INIA). INIA Quilamapu is home to the Program for Genetic Improvement of Rice, which has released other varieties— such as Shiny, Gold, and Platinum— that have had a big impact on Chile’s rice production. 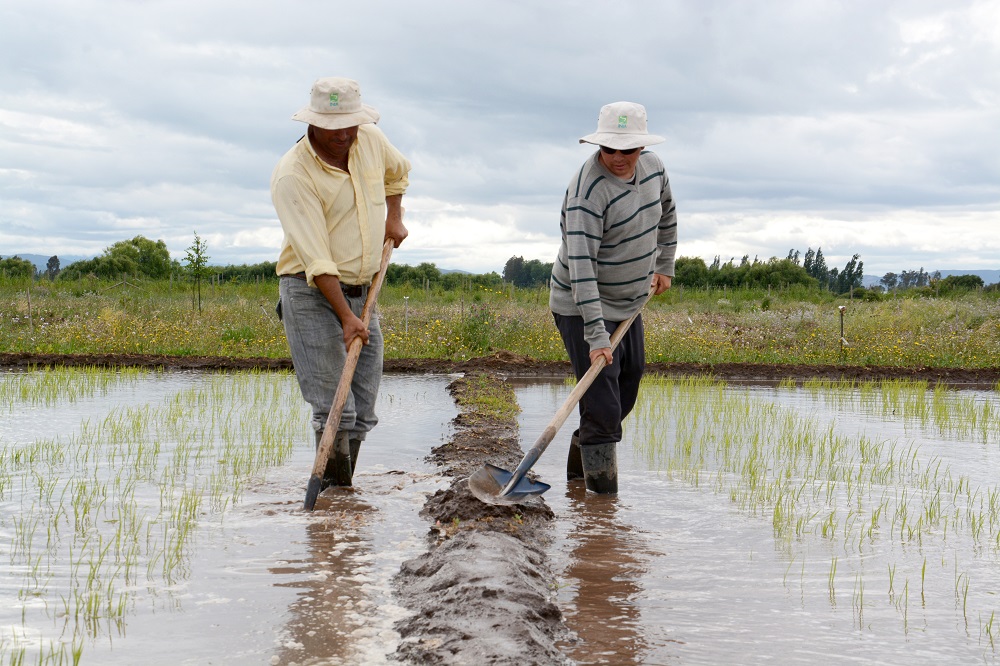 Smaller area, higher production
In Chile, the area planted to rice has decreased by 50% in the past 30 years with an estimated 25,000‒27,000 hectares under cultivation. Despite this, production has increased by 37% over the same period to an average of 160,000 tons per year.

Karla Cordero, the coordinator of INIA’s Rice Program, attributes this increase in production to the use of adapted varieties and improvements in agronomic management. The only significant problem has been weeds, particularly those that are resistant to herbicides. Because of this, INIA is investigating alternative crop management methods to reduce the effect of weeds in the field.

The guardian of the Maule
Majestic and protective is the description of the snow-capped peak of Longaví of the Andes mountain range. At 3,240 meters above sea level, in addition to giving water to the Maule region, the main rice-growing zone of Chile, it provides a protective shield. Longaví, together with the snow-capped peaks of Chillán, block the passage of pests. As a result, rice production in Chile is very “clean” because of the low application of agricultural chemicals.

According to Mario Concha Urra, president of Fedearroz, Chile’s federation of rice producers, some 80% of the country’s rice comes from the Maule region.

“In the past 10 years, we have grown from an average production of 4.5 tons per hectare to 6.9 tons, with some farms producing as much as 9 tons,” said Mr. Urra. “This is due to the implementation of appropriate agricultural practices that take advantage of the genetic potential of certified seeds.”

By adopting new technologies, Chile has boosted its rice production. A significant number of producers have participated in technical tours, training, and field days thanks to the country’s link with the Latin American Fund for Irrigated Rice (FLAR), a public-private alliance whose aim is to improve the competitiveness and sustainability of the rice production systems in the region.

But not all is well among the farmers. Climate change and climate variability are affecting rice productivity. In fact, Longaví and its neighboring mountains are not receiving enough snow that provides the water to irrigate the rice fields in the spring and summer. The rains are failing as well.

The reservoir that provides water to the nearly 1,400 producers in the zone is currently working at half capacity, according to Rafael Campos, head of the Embalse Digua Association in Parral in Linares Province of the Maule region.

In the more than 40 years that the reservoir has been operating, it has failed to fill to capacity only three times. The year 2016 was one of them; two of the rivers that feed the reservoir had a reduced flow. 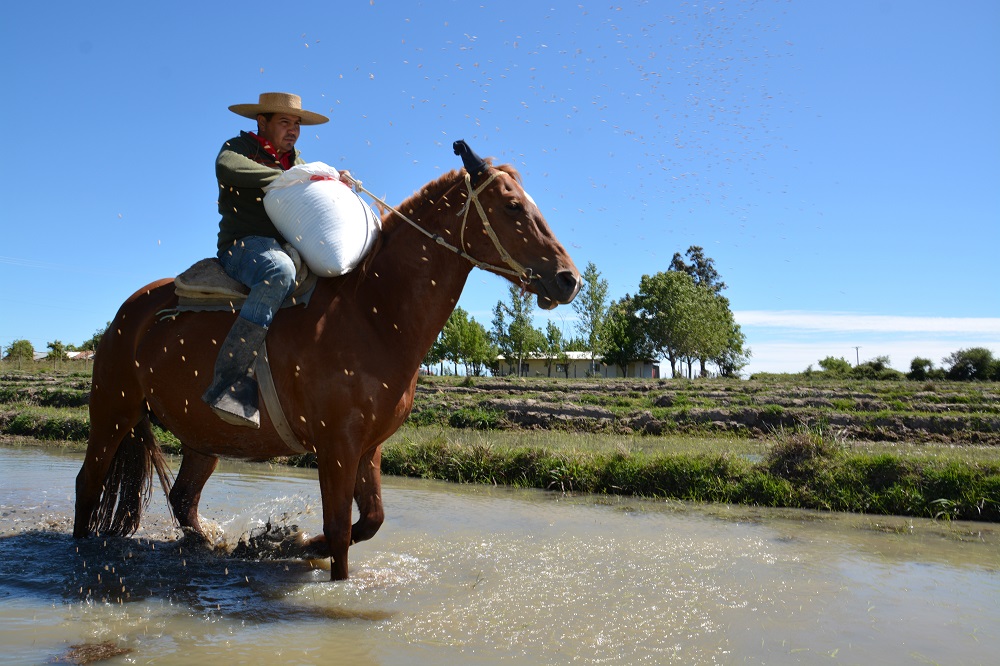 The use of horses for rice production is a common practice among Chilean smallholder farmers. José Moreno helps with the sowing activities of the Membrillo farm, in the Maule region. (Photo: CIAT)

“The reservoir has a storage capacity of 220 million cubic meters of water,” said Campos. “Last year, we made it to 178 million cubic meters. This will have repercussions on the next harvest because the farmers did not risk planting for fear of running out of water halfway through the season. Because of the water shortage, some 5,000 hectares were not planted.”

INIA has worked closely with researchers at the International Center for Tropical Agriculture (CIAT) and, more recently, with FLAR, from which they have obtained genetic materials that are evaluated for developing new varieties for the country. Furthermore, there are already experiments in direct planting and early soil preparation (recently, as early as right after the harvest of the previous season), which allow producers to plant earlier, use up to a third less water during the crop cycle, and increase yields.

“These practices can transform rice into a more productive crop with a lower environmental impact,” says Ramón Henríquez, who leads the technical assistance enterprise Agroparral that works with the country’s Ministry of Agriculture.

For Karla Cordero, the development of new varieties will also be indispensable for the sustainability of Chile’s rice production. In order to do that, INIA is proposing projects with the International Rice Research Institute, and also with Japan, parts of which have comparably low temperatures.

The development of varieties and the management of rice growing in Chile show how both research and the empirical knowledge that passes from generation to generation of farmers can serve as a model of adaptation for other rice-growing regions that experience low temperatures.

In Chile, producers, technicians, researchers, and industrialists have learned how to promote the rice that is born in the country’s cold soils, along with the development of seeds that deserve to be considered the “jewels in the crown” of the kingdom of temperate rice.