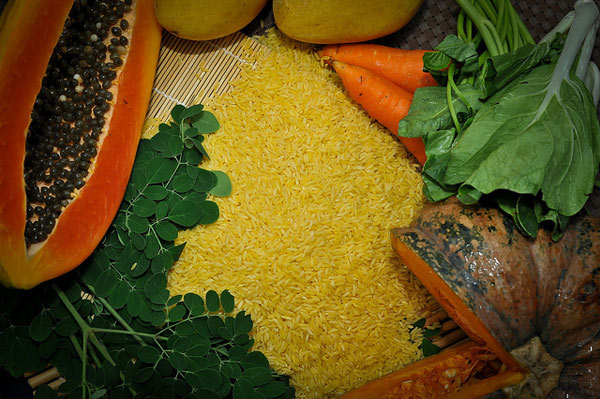 Beta carotene, which the human body converts into Vitamin A, is essential for eye health and the proper functioning of the immune system. It is naturally found in fruits, vegetables, and now it is in Golden Rice thanks to genetic modification. (Photo: Isagani Serrano)

It all started in 1984 in Los Baños, Laguna, in the Philippines. Scientists had begun to develop an exciting new approach to breeding crops—genetic engineering—and everyone wondered how it could be used to help the world.

In a house in this college town sat several breeders who were dreaming of what traits they could come up with using this exciting new technology. Increase yields? Develop crops to survive droughts? Protect rice against pests?

One breeder, who developed many of the Green Revolution crops that had saved hundreds of millions from famine, gave a startling answer: yellow rice. Why? Because, he said, vitamin A deficiency afflicts millions of people around the world.

How bad is vitamin A deficiency? In 2005, for example, the devastating effects of lacking this one vitamin affected 190 million preschool children and 19 million pregnant women in 122 countries. Each year, it is responsible for up to 2 million deaths and 500,000 cases of irreversible blindness.

Rice could substantially reduce the devastating impact of vitamin A deficiency because in many developing countries—the Philippines among them—the poorest families lack the means to buy the vegetables and fruits that contain this crucial nutrient. They can afford nothing more than plain white rice.

There is only one problem. Rice is not usually a source of vitamin A. While many fruits and vegetables have the genes to make this vitamin, neither rice nor any of its close wild relatives have these genes. Traditional breeding in rice is useless in the fight against this deadly vitamin deficiency. It would take genetic engineering to help solve the problem of making rice produce its own source of vitamin A.

Golden Rice, from dream to reality

Today, we are there. The dream of yellow rice—now dubbed Golden Rice—has gone from a rice breeder’s dream to actual rice plants that can be grown in fields.

Golden rice promises to help reduce the deaths and blindness that come with not getting enough vitamin A in poor communities around the world. As we try to improve the nutrition of poor families across the country, Golden Rice can help alleviate the health scourge of vitamin A deficiency. Studies have shown that one cup of Golden Rice could provide around 50% of the recommended vitamin A that an adult needs for a day.

We are there—that is, if we are not misguided enough to turn our backs on this important technology.

Recently, activists stormed a research field in Bicol on southern Luzon island in the Philippines and destroyed one of several field trials of Golden Rice, potentially setting back the delivery of this humanitarian crop. It was a criminal act against a project whose only goal is to help elevate the health of the world’s poorest people.

Many misconceptions exist about Golden Rice—too many to list them all here. But, as a plant scientist who works on rice, although not genetically modified rice, let me talk about three of them.

First is the notion that Golden Rice is some sort of unnatural, monster rice.

The truth is, in developing Golden Rice, geneticists have inserted only three genes into rice DNA to allow it to make beta carotene, which is a source of vitamin A. Three genes out of the more than 30,000 genes present in a rice plant. And, the genes they inserted to make the vitamin are not some weird manufactured material but are also found in squash, carrots, and melons.

So, there is nothing unnatural about the process—scientists just figured out how to take a gene from one species and add it to another’s DNA. Plants do this in the wild all the time. It is called horizontal gene transfer, and plants, animals, and bacteria have been shown to acquire many genes from each other as they evolve.

Breeders actually do much more radical things to the rice genome and the rice plant by traditional breeding methods, and with much less information about what exactly they are doing to the rice plant’s genes. We know a great deal more about the genes that were inserted into the Golden Rice by geneticists— what they do, how they act—than we know about thousands of genes and millions of mutations in rice.

Myth 2: GMOs are unsafe and risky

Second is the idea that genetically modified organisms (GMOs) are unsafe, cause cancer or other major health risks, or pose serious environmental problems.

Let me be clear here—the safety issue has been studied and discussed by scientists around the world, and they concluded that there is no evidence that GMOs are inherently unsafe. Let me repeat again. The most prominent scientific bodies in the world—among them, the U.S. National Academy of Sciences, the American Medical Association, the World Health Organization, and the Philippine National Academy of Science and Technology—have publicly concluded that GMOs are safe.

Now, it is true that we still have to test the safety of every new genetically modified plant variety that is developed—that is just common sense. In fact, GMOs are probably the most intensely tested and studied crop varieties in the world. Much more so than the seeds you buy from your local garden or farm store, which are released with no health or safety analysis.

But, you ask, haven’t I read stories about scientists that have supposedly linked health problems— even cancer—to eating GMO foods? Well, the overwhelming majority of reputable scientists who have examined these claims have shown that such conclusions are simply wrong. These stories are based on research that was poorly designed and analyzed, and other scientists have strongly criticized these studies.

Finally, there is the idea that Golden Rice is being developed to be sold by big biotechnology companies to profit from poor famers.

Again, let us be clear here: Golden Rice is a public project. While the company Syngenta helped develop Golden Rice, they have given it to the International Rice Research Institute (IRRI) for free—no costs, no fees, no royalties.

Golden Rice is now being bred by IRRI, in cooperation with the Philippine Rice Research Institute, and other public breeders around the world. The varieties that are developed will be turned over to government agricultural agencies in developing countries, which will then determine how to distribute them to farmers.

IRRI is not selling Golden Rice, and no big biotech company will make money out of it.

Critical juncture for the Philippines

Our country, and the world, is now at a critical point. The population of the planet will hit 9 billion people by 2050. The Philippines already has more than 100 million people. In the face of the decreasing land for farming, a growing population, and increasingly erratic climates, we need to use every tool we have, including agricultural biotechnology, to help our farmers and our people to survive and thrive.

Our scientists have helped develop Golden Rice varieties, as well as other genetically engineered crops, to increase our food security. Let us not turn our backs on this technology for the 21st century, and find ourselves once again at a technological and economic disadvantage.

Nearly 30 years ago, some of the best rice breeders in the world gathered in Los Baños and discussed harnessing biotechnology to help feed the world. What they dreamed up is now poised to become a reality that will help farmers produce more nutritious rice that can save lives.
Let us make sure that those who need it most can, for once, put gold on their plates.

Dr. Michael Purugganan is a Dorothy Schiff Professor of Genomics and Dean of Science at New York University.