Dr. Pulver is a scientist with a global mission:  improve farmers’ lives by raising crop yields. His accomplishments range from increasing Peru’s national rice production, to developing a system for evaluating rice resistance to blast in Colombia. From reducing yield gaps in the irrigated rice production of Venezuela and Brazil, to improving agricultural productivity in Nicaragua and Mexico. 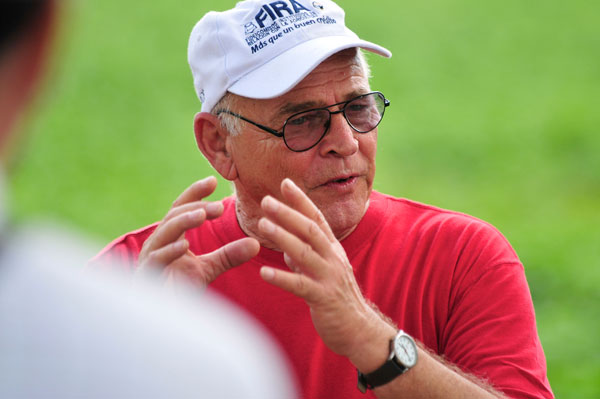 Dr. Pulver, a scientist who keeps searching for the “heart of yield”. (Photo: N.Palmer/CIAT)

“The simplest solution is always the best,” Edward Pulver likes to say, when explaining his approach to solving agricultural problems in the tropics. Through four decades of dedicated effort with a half dozen international organizations, this multifaceted agronomist has acquired an almost legendary reputation in many parts of the world for his ability to deliver development impact through innovations in the production of various crops, but especially rice.

One of Dr. Pulver’s favorite songs is the 1972 hit single Heart of Gold from Neil Young’s Harvest album. This is hardly surprising, as Mr. Young is an outspoken advocate of farmers. The song’s refrain, “keeps me searching for a heart of gold,” perfectly captures the restless and uncompromising spirit that has guided one successful career in music and another in agriculture.

Dr. Pulver is a straight talker, says what he thinks, and does what he says. He does science, and communicates it through debates, arguments, and critiques. He has worked with rice, soybean, banana, citrus, vegetables, and, most recently, oil palm. Diverse international development agencies—including the World Bank, Food and Agriculture Organization of the United Nations, U.S. Agency for International Development, World Wildlife Fund, and UN Common Fund for Commodities—have contracted him as a consultant for projects in Asia, Africa, and Central and South America. 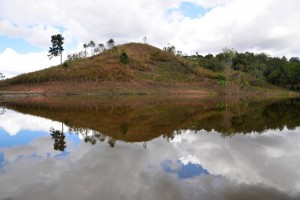 Rain water-harvesting reservoirs in Nicaragua, piloted by Dr. Pulver, provide farmers with water for their crops even during prolonged droughts. (Photo: N.Palmer/CIAT)

Two heads are better than one
In 1972, a young Pulver arrived in Colombia to work with the Instituto Colombiano Agropecuario (ICA), the national agricultural institute, as a volunteer with the U.S. government’s Peace Corps program. While serving as a crop physiologist at ICA, Dr. Pulver met Peter Jennings, who became his mentor and friend. Dr. Jennings had joined ICA as a rice breeder following a period of extraordinary achievement in Asia, where he contributed importantly to the development of the rice variety IR8 at the International Rice Research Institute (IRRI) in the Philippines. Referred to as “miracle rice,” this variety was instrumental in fostering Asia’s Green Revolution.

“At the end of each day, Peter would come to my office and we would talk about ways to increase rice yields; this was the perennial topic of our discussions,” Dr. Pulver recalled. Their long conversations were rich in ideas and highly innovative, combining two complementary perspectives, from Dr. Jennings’ experience with genetic improvement and that of Dr. Pulver in agronomy.

After completing his 2-year mission in Colombia, Dr. Pulver went to the International Institute of Tropical Agriculture in Nigeria to work on soybean. Dr. Jennings kept in contact with Dr. Pulver and, in 1981, appointed him to work on a project with the Colombia-based International Center for Tropical Agriculture (CIAT, its acronym in Spanish). The project’s aim was to promote irrigated rice as an alternative to clearing the Peruvian rainforest.

“It was a great experience!” Dr. Pulver said. “In 4 years, we were able to increase national rice production by 35%, reduce forest clearing, and improve incomes for farmers in the region.”

Through his friendship with Dr. Jennings, Dr. Pulver—the man of a thousand stories—came to know a lot about genetic improvement. He and Peruvian rice breeder Carlos Bruzzone developed a system for evaluating rice for resistance to Pyricularia oryzae (the pathogen responsible for rice blast, a major disease of the crop worldwide). Later, they transferred the system from Peru to the Santa Rosa Experiment Station near Villavicencio, Meta Department, which is a “hot spot” for the disease in Colombia’s Eastern Plains. The new system came to be a central feature of CIAT’s Rice Improvement Program, as did Dr. Pulver’s early work on cold tolerance in rice, using anther culture. 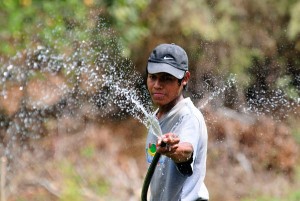 A farmer watering his crops during the dry season in drought-affected Nicaragua, made possible by reservoirs filled with rainwater collected during the rainy season. (Photo: N.Palmer/CIAT)

Making an agronomy revolution
In search of a means to consolidate and build on the achievements of these early years, CIAT, together with several national partners, established FLAR (the Latin American Fund for Irrigated Rice) in 1995. This is a public-private partnership for rice research with member organizations in 17 countries of Latin America and the Caribbean. Soon after FLAR was set up, it contracted Dr. Pulver to take on a significant challenge: to coordinate a new project aimed at reducing yield gaps in the irrigated rice production of Venezuela and Brazil’s state of Rio Grande do Sul.

From 2003 to 2006, average rice yield in Rio Grande do Sul had increased from 5.2 to 7.5 tons per hectare, while in Venezuela it had risen from 4 to 6 tons per hectare—over a total area, in the two countries, of more than 1 million hectares. Improved agronomic practices were also extended to Argentina and Uruguay, with similarly positive impacts on yield. Firmly grounded in science, the solutions were transferred from farmer to farmer through a simple formula consisting of six steps for improved agronomic management: planting date, planting density, seed treatment, weed control, fertilizer application, and water management.

“I learned that farmers understand clearly when the message is simple,” Dr. Pulver said. “Farmers are quick to learn when you address problems in a way that fulfills their desire to be more productive. Farmers, like many people, have to see to believe, and this is the basis for on-farm demonstration plots.”

Focused on raising yields
Turning his attention to Central America some years later, Dr. Pulver realized that 80% of the farmers in this region grow rainfed rice under harsh conditions. Far from being discouraged by the resulting low productivity, he was inspired to propose an alternative.

“We tried water harvesting on a pilot basis,” he said. “We weren’t interested in constructing hundreds of dams but only 10 to demonstrate what could be done.”

The project improved agricultural productivity and the quality of life for farmers in Nicaragua as well as Mexico by providing an option to cope with prolonged drought. What began as a rice project led to the diversification of agriculture, as water harvesting enabled farmers to grow other crops, such as beans, maize, fruits, vegetables, and sugarcane. After the project came to a close in 2012, the two countries obtained new resources to expand water harvesting.

Driven by an almost obsessive desire to raise crop yields, Dr. Pulver relishes a challenge. Few people know more than he does about the rice sector in Latin America and the Caribbean, and he‘s convinced that rice farmers in this region have plenty to offer their counterparts in Asia and Africa, especially in improved agronomy for high productivity.

Speaking his mind, as always, Dr. Pulver insists that “selection of new varieties should not be the priority in the majority of countries. The focus should be on getting high yields and improving water management.”

Ms. Escobar is a communications specialist of FLAR, based at CIAT headquarters in Cali, Colombia.