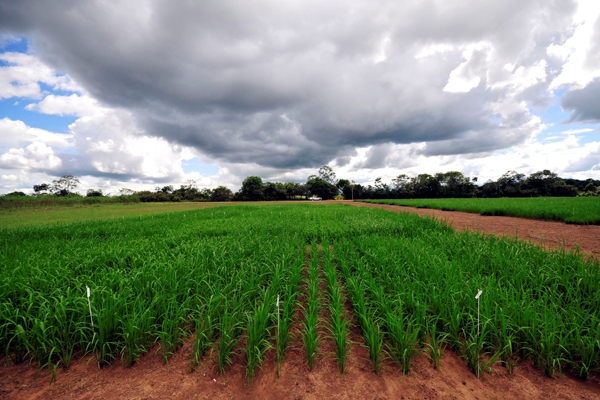 The long and tortuous route traveled by many of the more than 400 improved rice varieties developed in the last several decades by the International Center for Tropical Agriculture (CIAT), in collaboration with its many partners, leads through a decidedly out-of-the-way spot. This is the , located 17 kilometers outside Villavicencio, the capital of Colombia’s Meta Department, in the heart of the country’s vast Eastern Plains.

These 400 varieties are direct seeded to a great extent—estimated at nearly 60% of the approximately 3.2 million hectares sown to the crop in Latin America and the Caribbean— and they produce around 27 million tons of paddy rice per year.

A hotspot for rice

“In 1982, I visited Colombia’s National Rice Growers Association, known as Fedearroz, and explained the need for an excellent evaluation site that would meet all the key requirements for genetic improvement,” said famed rice breeder Peter Jennings, in describing how the Santa Rosa Experiment Station was chosen. The station celebrated its 30th anniversary in 2012.

A pioneer of the Green Revolution in rice (see Luck is the residue of design), Dr. Jennings made the cross resulting in IR8—the 1960s variety that essentially doubled the crop’s yield potential in Asia and elsewhere. He developed many more varieties during his time as a rice breeder at the International Rice Research Institute (IRRI) and Rice Program leader at CIAT in the 1980s, and more recently with the Latin American Fund for Irrigated Rice (FLAR).

Santa Rosa is a “hotspot” in more ways than one. Its temperatures usually hover around 25°C and it has exceedingly high levels of rice blast, one of the most damaging fungal diseases of the crop worldwide.

Dr. Jennings’ proposed location won support. In 1983, Fedearroz purchased the 30 hectares then belonging to the farm Las Brisas. Its name, meaning “the breezes,” is actually quite fitting and doesn’t reflect the original owners’ wishful thinking or sense of humor. Since the early 1980s, the station has been managed by CIAT, serving as a key focal point for collaborative agricultural research.

For rice blast research, Santa Rosa is the scene of a perpetual perfect storm, according to Fernando Correa, a senior rice pathologist who spent many years working at the station. “The conditions at Santa Rosa are such that, within the disease pathogen’s population, individual races develop, showing a wide variety of disease virulence genes that can overcome genetic resistance,” he said. “This gives plant breeders the opportunity to identify the best resistance sources for crossing and to select lines with combinations of resistance genes that can control this variability in the pathogen.”

But, that’s just part of the story, according to Dr. Correa. “Since the pathogen at Santa Rosa has virulence genes for many known resistance genes, the resistance developed under these conditions can be applied to conditions elsewhere. This is why our work on blast at Santa Rosa has contributed so importantly to identifying rice lines resistant to pathogen populations that are in other countries of Latin America.”

The proof of his assertion consists of 48 improved varieties that FLAR has developed in recent years for 12 countries of the region, with three cycles of selection for disease resistance at Santa Rosa.

Of rice and men and women

Over the last three decades, the station has witnessed the birth of many outstanding rice varieties, which include Oryzica 1, Oryzica Llanos 5, Fedearroz 50, Fedearroz 2000, Fedearroz 369, Fedearroz 174, Fedearroz 733, and Fedearroz Lagunas Cl. Santa Rosa also became the cradle in the development of Oryzica Sabana 6, the first rice variety adapted to acid soils in Colombia.

The station is a symbol of CIAT’s strong commitment to strengthening the capacity of national rice research organizations in Latin America. About 500 professionals from these organizations, including specialists in extension and education, have received technical training at Santa Rosa in rice improvement and management. Today, many of these people form part of the new generation of research and development leaders in organizations across the region.

Research at the station is still going strong and it plays a critical role in a renewed push to accelerate agricultural development in the Eastern Plains. To this end, CIAT has strategically partnered with the Ministry of Agriculture and Rural Development and the Colombian Corporation of Agricultural Research (CORPOICA) for scientific collaboration in Colombia’s wider Orinoquia region.

Meanwhile, Fedearroz is developing at Santa Rosa a strategy to widely disseminate rice research results obtained so far in the Eastern Plains, including improved varieties that are tolerant of acid soils and resistant to rice blast and other major diseases, and that show high yield potential and good adaptation to the region’s variable growing conditions.

In the near future, Santa Rosa will acquire a high-tech laboratory that will help identify rice diseases and insect pests and be used for molecular genetic analysis. This new facility will help rice producers in the region, while facilitating the CIAT Rice Program’s selection of improved varieties for Colombia and Latin America.