There are several reasons for low varietal replacement rates. These include the lack of extension services and access to newly developed high-yielding, stress-tolerant rice varieties as well as the unavailability of the seed when farmers need them. But rice farmers are open to the new varieties if the constraints were eased or removed. 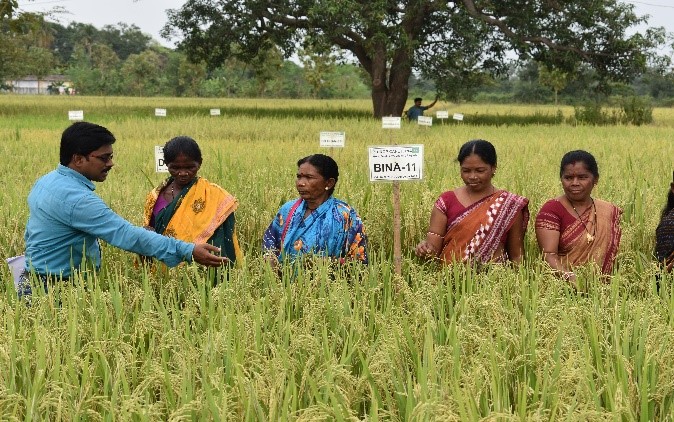 Women farmers at the BINA dhan-11 demonstration trial in Chakuli Village get an opportunity to evaluate the field performance of the stress-tolerant variety . (Photo: IRRI India)

Bargarh, one of the districts of Odisha in India, is famously known as the “Rice Bowl of Odisha” for its intensive paddy cultivation. Situated about 20 kilometers from Bargarh District headquarters, Attabira Block produces a major portion of rice the states’ rice. In 2019, the district harvested almost 0.4 million tons of rice from 62,815 hectares of farmland.

Chakuli Village is one of the areas in the block with the highest potential for rice productivity. Given its considerable irrigated land of approximately 370 hectares, rice farming could provide enough agricultural opportunity for both the harvest seasons.

Limited by old varieties
The farmers in Chakuli cultivate different high-yielding and hybrid paddy varieties including Arize-Gold 6129, NK-5231, MC-13, MTU-1001, and MTU-1010. In many places in the district, hybrid varieties like MC13 and Bolt have been widely adopted because of the intensive promotion and selling strategy of private seed companies.

However, some of these are quite old. MTU-1010 and MTU-1001 are almost 20 years old and susceptible to many pests and diseases. Apart from these, the two varieties are prone to crop lodging at the time of maturity making them unpopular among farmers. However, most farmers from this village are not early adopters of new rice varieties.

Ideally, the seed systems that serve smallholder farmers should provide farmers with access to varieties that have been developed in the last 10 years while withdrawing obsolete ones. But in most developing countries many varieties date back to the late 1970s from the end of the Green Revolution.

Farmers in Chakuli Village have been searching for suitable substitute rice varieties to overcome the shortcomings of the current varieties they are planting. However, the lack of interventions from the extension system and services, access to the latest information, and the limited knowledge of newer varieties have contributed to the slow adoption of new varieties by farmers in the region. 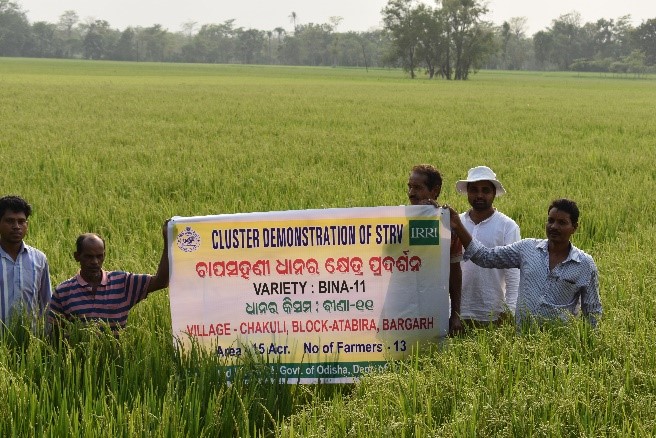 Farmers at the cluster demonstration of BINA dhan-11, a project of DAFE and IRRI. (Photo: IRRI India)

,
A new generation of rice
Increasing Productivity of Rice-based Cropping Systems and Farmer’s Income, a project supported by the Department of Agriculture and Farmer’s Empowerment (DAFE), has achieved various milestones in the span of the last four years. Some of the project’s interventions have led to particularly inspiring success stories that also showcase the role of the International Rice Research Institute (IRRI) as an effective instrument in enhancing farmers’ income by hastening the adoption of different climate-resilient rice varieties.

Considering the requirement of varietal replacement with a suitable substitute of the two predominant varieties (MTU 1010 and MTU 1001), IRRI—with the active cooperation of the Department of Agriculture and the enormous enthusiasm and participation of the villagers in Chakuli—promoted BINA dhan-11.

BINA dhan-11 is a flood-tolerant, medium-duration (110–135 days), and high-yielding variety developed by the Bangladesh Institute of Nuclear Agriculture (BINA). These traits make it as as a best-fit substitute for the popularly grown but old varieties. 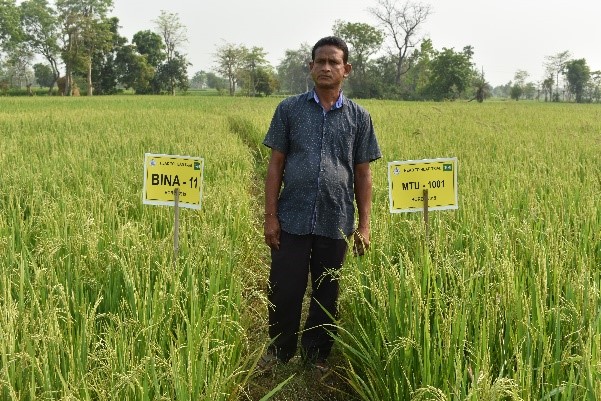 .
Through the eyes of the farmers
The IRRI team organized a field day event for 40 progressive farmers to give them the opportunity to evaluate and score the varietal performances and yield potential of BINA dhan-11 against MTU-1010 and MTU-1001. The team also provided the seed of BINA dhan-11 and a platform for learning about quality seed production techniques.
The key observations made by the participating farmers and other stakeholders were:

BINA dhan-11 ripens from the top to the bottom of the panicles giving better yield in per panicle compared to the other two varieties.

These distinct advantages, along with high grain yield, encouraged the adoption of BINA dhan-11 among farmers 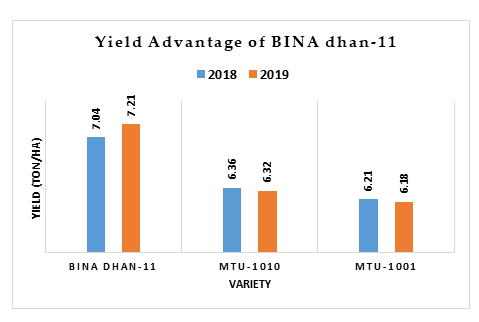 Impact on the field and beyond
There are several reasons for low varietal replacement rates. These include the lack of extension services and access to newly developed high-yielding, stress-tolerant rice varieties as well as the unavailability of the seed when farmers need them. But rice farmers are open to the new varieties if the constraints were eased or removed.

In Chakuli Village, the high varietal replacement rate led to tremendous increase growth in rice production and sales. Furthermore, half of the rice area in the village was planted with BINA dhan-11 even before Odisha State Seed Corporation (OSSC) started selling its seeds in the region. This indicates that the farmer’s group that attended the intensive BINA dhan-11 demonstration programs played a significant role in multiplying this variety and informally spreading the variety to the neighboring villages. 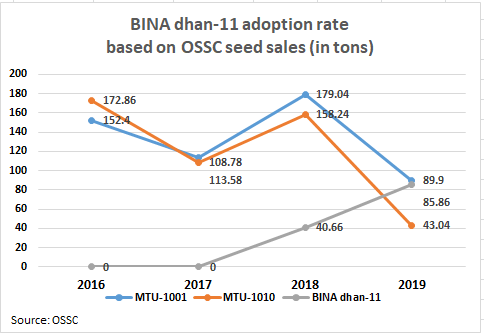 Since OSSC started selling BINA dhan-11 seeds, the demand for MTU-1010 and MTU-1001 sharply decreased in 02019. This reflects that farmers’ participation in the demonstration program and providing them with an enabling system is crucial in evaluating and popularizing new and better-performing varieties and farm technologies.

__________________
Mr. Rout is the officer and Mr. Hossain is the M&E specialist in the Agricultural Research and Development, respectively, and Ms. Nayak is a lead specialist at the Seed & Delivery Systems at IRRI India.