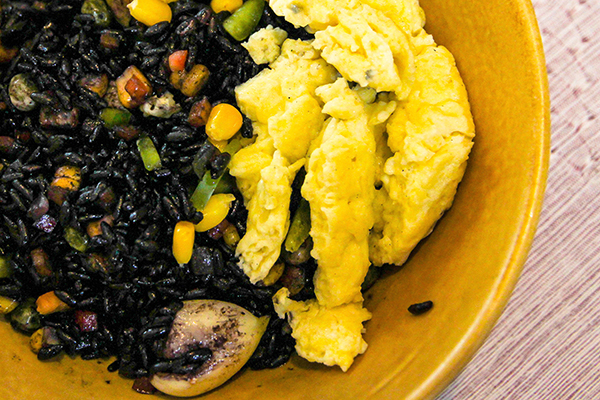 The Purple Yam is a restaurant in Brooklyn, New York, founded in 2009 by me and chef Romy Dorotan, with a branch in Manila in the Philippines. The restaurant specializes in the culinary heritage of the Philippines infused with modern innovative flair and influences from other Asian countries, particularly Korea. In a 2009 review, the New York Times described dining at the Purple Yam, for dishes such as its adobo and halo-halo, as “something worth experiencing.”

Ominio fragrant rice is a medium-grain variety cultivated in the rice terraces of Mountain Province and Ifugao Province in the Central Cordillera Mountains in northern Philippines. This heirloom rice has a deep violet or black color and is the preferred variety of the indigenous people in the area for making rice desserts and rice wine. Ominio has been included in the Ark of Taste, an international list of endangered heritage food from different countries.

In the 1990s, I was introduced to heirloom rice and was asked to help develop a market in the U.S. For me, it was a no-brainer because organic heirloom rice passes my standards of quality ingredients. Heirloom rice is healthy—packed with nutrients and flavorful. In fact, it is so flavorful that, at my restaurants, heirloom rice is not an accompaniment but is considered as a dish.

My mantra is that, if we want to preserve heirloom rice, we should eat and cook with it on a daily basis. Preserving it is not just keeping it and treating it just as an interesting factoid. Eating it and bringing it back to the table will take heirloom rice out of anonymity and hence increase its commercial viability.

In turn, patronizing heirloom rice will increase farmers’ incentive to grow it and help them earn a lucrative livelihood.

I am is also espousing establishing a link between farmers and consumers. Farmers should know who will be eating their product. And, it is the responsibility of a diner, a restaurateur, and a home cook to know the amount of work it takes to produce a grain of rice. If they understand how rice is produced, they won’t throw away a single grain of rice. They will respect not just the product but the farmers who grew it.

1. Rinse uncooked rice in a pot with water and drain. Do this several times until the water becomes clear.

2. Cook the rice in a pot with equal parts water. As soon as the water starts to boil vigorously, put a lid on the pot and turn the heat down to low. Simmer for 20–30 minutes until all the water has been absorbed and the rice is tender. The rice can also be cooked in a rice cooker using equal parts water. (Note: This can go up to 40 minutes depending on the moisture content of they will need a little bit more water and longer cooking time.)

3. Spread the cooked rice on a tray to cool down and dry off some of the excess moisture. Set aside.

4. Dice the carrots and white onions. Crush the garlic. Rinse the green peas.

5. Steam the corn in the husk and then remove or scrape the kernels from the cob.

6. In a wok, heat the turmeric oil with crushed garlic over medium-high heat.

7. When hot, add the carrots, onions, and corn kernels. Sauté until translucent and soft.

8. Add the cooked Ominio rice and mix well with the vegetables. Add the green peas.

9. Crack the egg directly over the rice and mix thoroughly.

10. Add salt and pepper to taste and serve immediately.