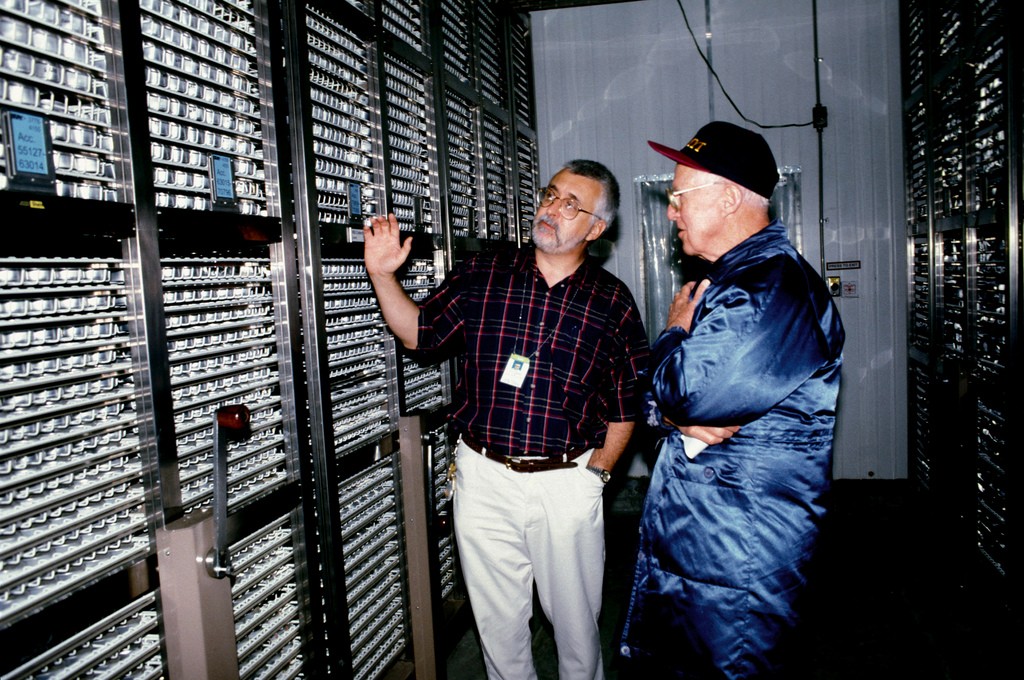 Oblivious to the cold, Dr. Jackson takes Nobel Tourist-Laureate Norman Borlaug on a walkthrough of the genebank’s large freezer during his 1999 visit to the Institute. (Photo: IRRI)

Even though I managed a large genebank for 10 years at the International Rice Research Institute (IRRI), I still don’t fully understand why seeing lots and lots of packets of seeds in cold storage at -18 degrees Celsius—essentially a very large freezer—holds such a fascination for so many people. There’s nothing particularly glamorous about that, but it just seems everyone wants to walk inside and see for themselves.

In a tropical country like the Philippines, this is a novel experience, of course. Not so at the Svalbard Global Seed Vault inside the Arctic Circle. I guess there are times of the year when it must be colder outside than inside. There again, that genebank has a particular attraction and significance.

Visitors to IRRI’s genebank have ranged from royalty (Princess Maha Chakri Sirindhorn of Thailand, Prince Albert of Monaco, and The Duke of Gloucester from the UK); heads of state (from the Philippines, India, Lao People’s Democratic Republic, and Myanmar to name just a few, even disgraced former President Fujimori of Peru); heads of government and other politicians (from Bangladesh, Vietnam, and the Philippines, of course); ambassadors and other members of the diplomatic community in the Philippines; Nobel Laureates such as Norman Borlaug (Peace, 1970) and Joseph Stiglitz (Economics, 2001); heads and representatives of donor agencies to IRRI; eminent scientists; and germplasm specialists with a particular interest in seeing how IRRI tackles the challenge of managing such a large germplasm collection.

Usually, I had just 10–15 minutes at most to describe why conserving rice seeds was so important for the future of rice agriculture—after all, rice is the staple food of half the world’s population. Most visitors had never been inside in a genebank before, let alone seen the diversity of rice varieties, or, in fact, realized that such diversity even existed. There’s no doubt however that explaining the role and work of the genebank to these visitors is not only necessary, but it is a rather important aspect of genebank management. These visitors are “genebank ambassadors” and can spread the good word about the strategic importance of genetic conservation. Time (mostly) well spent!

The International Rice Genebank is the largest collection of rice genetic diversity in the world, holding more than 127,000 rice accessions and wild relatives for safe keeping and sharing for the common public good. It is a virtual universe that contains many important traits that rice breeders need, according to Ruaraidh Sackville Hamilton, an evolutionary biologist who succeeded Dr. Jackson.

IRRI works to ensure the long-term preservation of rice biodiversity as a part of the global strategy for the conservation of rice genetic resources. This is in partnership with national programs and regional and international organizations worldwide, including the CGIAR Research Program for Managing and Sustaining Crop Collections.[/su_note]

Dr.  Jackson started his career in genetic resources in the UK and Latin America during the 1970s and ’80s and then spent 19 eventful years at IRRI (1991-2010) in various capacities—germplasm specialist and the first head of the Genetic Resources Center (created in 1991); program leader for Rice Genetic Resources: Conservation, Safe Delivery, and Use; and then, in a complete turnabout, director for Program Planning and Communications (in 2001). This GOT is based on one of his Balanced Diet blog posts.