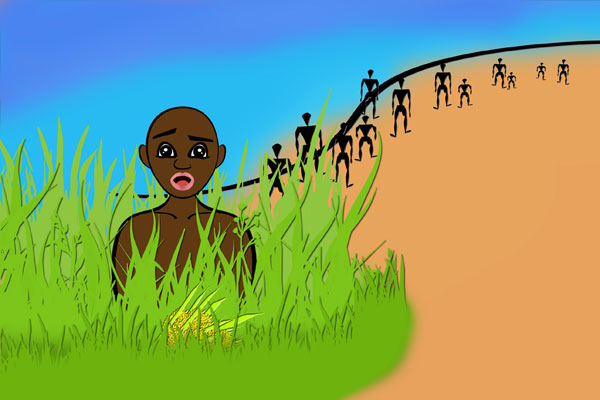 Rice has often received credit for health-giving properties. Boiled rice, which is easily digested by people recovering from illness, is sometimes eaten to treat stomach problems. People with food allergies can usually enjoy rice. This story, from the Vai people of Liberia, probably dates back to the 17th century and attests to rice’s healing properties.

The Vai tribe was traveling along the West African coast. Its people had left the dry plains of their Mali homeland many moons before. Then, they reached a great ocean and turned south. Again, they walked for many moons and were nearing the region now called Liberia. To their right, the great Atlantic Ocean stretched blue and gray beyond the horizon. To their left, the dark tangled jungle formed a thick green barrier.

Their long trek had not been easy. It had been difficult for the whole tribe, but especially for the older members who had struggled to keep going. However, they had been lucky. Food and water had been plentiful, and no one had been seriously ill. Any sickness or pain had been brief and easily cured.

Khamah, the tribe’s chief, strong and hearty in his younger days, was aging. Though less able physically, he was kind and his wisdom was still revered by young and old. One morning, he woke feeling ill.

“My people, I am unwell,” he said weakly. “Let us not travel today.”

The elders were concerned. This had never happened before. The tribe rested for a day or so. When he seemed stronger, they went on their way. They walked slowly so their chief would not tire. Yet, he collapsed by afternoon so the tribe made camp. The next day, Khamah could not walk.

“What to do?” the elders asked each other.

“We need to keep trekking to reach our destination before the hot season dries up the water holes,” said one.

“And, soon food will be harder to find,” said another.

They would never leave a sick person behind, certainly not their well-loved chief. The younger men bound saplings together to make a bed, and laid their chief gently on it. Their trek continued, albeit slowly. They avoided bumps and any sudden movements to keep their chief comfortable.

Whenever the tribe stopped, its members offered him the best and most succulent portions of their food. But, as the days went by, he grew weaker and weaker. They tried potions. They also tried ju-ju or magic spells, but even this had no effect. One day, he ate nothing at all. He was very frail indeed. Everyone feared he would die.

The elders told the tribe to halt. They camped under a tree waiting for this sad event. No one had the heart to continue the journey. No one felt much like eating either. Even the children, usually pleased for a respite from the long walks, played half-heartedly.

Young Wututu was usually very active. He climbed trees higher than any other boy and threw stones as far as any man. But, on that day, he simply wandered among the grass poking aimlessly with a stick. With a jolt, the stick hit something hard and firm. He bent down to look and found a small bundle tied tightly with a thin vine.

“Ooh… ooh,” he thought, “no man come this way for long time … perhaps I be dreaming.”

He poked it again.

“Maybe Ananse left it; maybe this is not good,” he wondered.

Ananse was a bad spirit who took the form of a spider. Frightened to open the bundle alone, Wututu carefully carried the bundle on the end of his stick. Back in the clearing, under the tree where the tribe was waiting, he gave it to Khanuhwele.

Khanuhwele was a wise old woman whose face was deeply lined by the passage of time. She untied the vine and carefully opened the small bundle. Strange grains spilled out. She instinctively moved back. She had never seen grains like these before. She called the others. They all stood around and peered at these strange things, unsure what to do.

“What are these things for?” whispered a wizened old crone bending down to look closely.

“Gope, the spirits; they sent them,” fearfully croaked another with her mouth agape.

Khanuhwele’s age made her well respected by the tribe. They looked to her for guidance. She leaned heavily on her stick that was almost as gnarled as her weather-worn face.

“They look clean,” she said quietly. ”We should cook them.”

Soon the grain was bubbling in a pot over a fire. When it seemed ready, everyone tasted it, and they liked its soft texture and flavor.

“This may tempt Khamah to eat,” said an elder.

They fed Khamah some of the cooked grains. His eyes remained closed, but he swallowed this new chop or food.

So, they fed him more. Again, he said, “Kolo,” and again they gave him more. When he had eaten enough, he motioned for them to stop. The pot was nearly empty.

Amazingly, Khamah’s strength returned. He kept asking for more of the small white grain that tasted so good and had led to his remarkable recovery. So did the rest of the tribe.

Even to this day, the Vai people call rice kolo, which means “give me some more.”

Ms. Flinn-Stilwell is a writer based in Hobart, Australia. This story is part of her forthcoming book, Rice—a grain with many stories, a collection of 28 legends about rice and the many customs associated with this amazing grain.