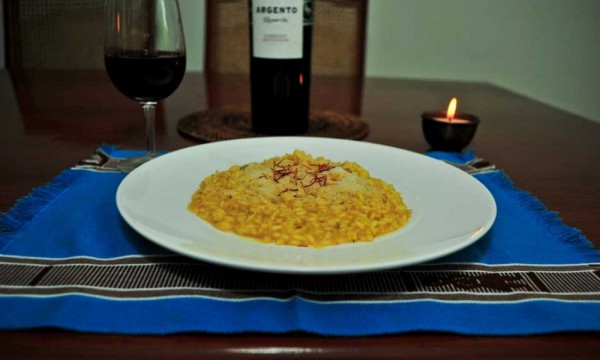 Risotto is one of the most important and beloved traditional Italian dishes, particularly in Milan. It is served immediately and eaten warm, which is why it is mainly a winter dish. It is a primo, or served on its own before the main course.

Risotto is a method of cooking rice varieties that are grown in Italy such as Carnaroli, Arborio, and Vialone Nano. Rice first arrived in Italy in the 13th century when it was brought by the Moors, Saracens, and priests traveling from Asia. It was initially cultivated in Sicily and around Naples. Later, rice cultivation moved to the Po Valley in northern Italy after pasta became the preferred staple of the southern population.

As with most great Italian dishes, the original risotto recipe has changed over time. The version of risotto that we know today was described by Antonio Nebbia in his 1779 cookbook, Il Cuoco Maceratese, in which he writes about the technique that allows rice to cook slowly and absorb the broth, ladle by ladle, after it has been toasted with soffritto (sautéed onion).

This is a simple recipe to prepare but all is not so easy. Patience and a little bit of practice are important in cooking a perfect risotto. It requires precise methods of cooking known as tostatura and mantecatura. Tostatura means toasting the rice with the soffritto on low heat for 4–6 minutes. The onions for the soffritto should be chopped to the size of the rice grains so that the onion cannot be distinguished from the rice in the finished dish. Mantecatura is the process of adding the parmesan cheese and cold butter into the risotto, off the heat, and mixing vigorously.

To make Risotto alla Milanese, it is important to use fresh ingredients for the stock or broth. The stock has to be very tasty and enriched with vegetables, fresh herbs, cloves, cinnamon, nutmeg, and grated orange peel.

Ingredients for the stock

Directions for the stock

Place all the ingredients in a large saucepan and boil for about 2 hours, skimming the broth when necessary. Filter when done.

Ingredients for the Risotto

Directions for the Risotto

Put two ladles of stock with the saffron in a separate pan, and keep hot. In another pan, boil the dry white wine for 2 minutes until the alcohol evaporates. Keep hot.

In a large pan, put in the olive oil, one teaspoon of butter (keep the remaining butter at cold temperature), and chopped onions. Cook over medium heat and stir for 6–8 minutes until the onion becomes soft. Add the rice and stir for 2 minutes until it becomes slightly translucent.
Then add the white wine. Mix until the wine is absorbed by the rice. From this moment, the rice will take 15–16 minutes to cook “al dente.”

Add a ladle of stock and cook, gently stirring from the center to the side; turn up the heat a little if necessary.
Continue adding the stock, ladle by ladle, while stirring, allowing the rice to cook and the stock to be absorbed each time.

Add the saffron stock and continue to stir until the rice absorbs the stock. The risotto should have a creamy texture; as Italians say, “all’ onda” (wavy)—which is caused by the starch coming out of the rice. Keep it creamy by stirring gently. Add the bone marrow and powdered saffron, and stir.

Taste the dish. If it is not cooked, add more broth, and continue cooking until it becomes al dente or when there is a slight crunchiness in the middle of the rice. Check the seasoning with care.

When ready, remove the pan from the heat and start the mantecatura. Add the parmesan cheese and the rest of the butter. Stir well for about 2 minutes. Now the risotto becomes very creamy.

Luigi Concetti is a chef by training and currently consultant with Food and Housing Services at IRRI. He arrived in Los Baños in 2009 with his wife, Fiona Hay, genetic resources expert at IRRI. He has had experience setting up a number of restaurants in his home country of Italy. Living in the Philippines, he has enjoyed trying the local cuisine as well as that of other countries that he has visited since coming to Asia—including different varieties of rice.