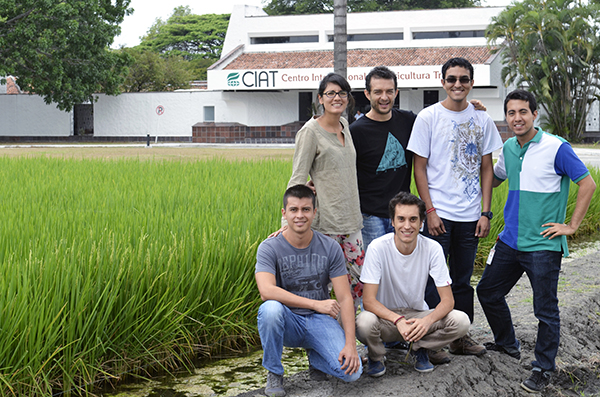 CGIAR scientists wielding big data tools to blunt the impacts of climate change on Latin America’s rice production have been named one of two winners of the Big Data Climate Challenge at the recent United Nations Climate Summit held in New York City, U.S.A. The other winner was the World Resource Institute’s Global Forest Watch.

The challenge was launched in May by the Global Pulse—a UN initiative created to harness big data, as a public good, for sustainable development—together with the Secretary-General’s Climate Change Team. The initiative aims to “address climate change by sourcing the best ideas in the world to strengthen the case for climate action.”

From analysis to action

Climate action is what Colombian rice farmers desperately need, as seemingly crazy weather—subtle shifts in rainfall plus more extreme climate events—forces them to toss aside familiar assumptions on when and what to plant. In the last 5 years, emerging climate change impacts have already driven down yields of irrigated rice from an average of 6 tons per hectare to 5 tons, according to FEDEARROZ, the national rice growers association.

At stake is the ability of Colombia’s rice sector to remain competitive—catering to its own consumers while also trying to generate export earnings—under the country’s new trade liberalization policies. Climate change also poses a broader threat to Latin America’s ability to reap its enormous potential as an export-centered granary for the rapidly growing global population.

To attack the immediate problem faced by Colombian rice growers, scientists at CIAT analyzed mounds of data in close collaboration with FEDEARROZ. The association conducts an annual rice survey, maintains a harvest monitoring data set, and recently carried out experiments on rice sowing date. Researchers also tapped into streams of weather data collected by FEDEARROZ and the Colombian Institute of Hydrology, Meteorology, and Environmental Studies.

Then came the fun part for geeky data crunchers: using various data-mining techniques (with names such as “artificial neural network” and “dynamic time warp”), they analyzed all these data and came up with some pretty straightforward conclusions.

“Through a case study, we observed that the big climate factor limiting yields in some areas is accumulated solar energy during the grain ripening phase,” said CIAT researcher Daniel Jiménez. “To ensure that crops get optimum radiation, farmers can shift the sowing date, and to further reduce yield losses, they can adopt rice varieties that are less sensitive to the amount of radiation received.”

This finding coincides with the results of many years of field research. But the difference is that the big data reached this conclusion in just one year and offers the possibility of linking it with climate data analysis to provide farmers with timely and site-specific recommendations.

The approach seems to be working. “Your analysis was very helpful for discussing possible climate change impacts with the farmers; we were able to avoid big economic losses for about 170 rice growers on 1,800 hectares,” said Patricia Guzmán, who leads FEDEARROZ’s technical department, in an email reporting on field testing of the recommendations in Colombia’s Córdoba Department.

In another case study, the analysis of historical weather data revealed that a diverse set of distinct climate patterns occurring over the years in Meta Department, a major upland rice area, is clearly associated with growing conditions that are favorable or not for production. This means that, based on seasonal climate forecasts made with advanced simulation tools, researchers can give farmers reliable recommendations about the appropriate planting date and rice variety months in advance, helping them to avoid losses of 1–2 tons per hectare, Dr. Jiménez explained.

He and Sylvain Delerce, an award co-winner, are part of CIAT’s crop and climate modeling team.Their work on rice forms part of a major initiative on climate change, carried out by CIAT in partnership with Colombia’s Ministry of Agriculture and Rural Development, which generously supports the work.

The sky’s the limit

The scope of the big data approach seems limitless: “As we get more and more data, we’ll soon be able to develop site-specific recommendations for every rice-producing area in Colombia,” said Dr. Jiménez. This information should also prove valuable for rice breeders, better enabling them to develop new lines that are adapted to a changing climate.

Further research will incorporate data on soils and other factors into the new tools to increase their explanatory power. CIAT researchers will also work with the Fund for Irrigated Rice in Latin America (FLAR) to scale up the approach with rice growers associations in other countries, starting with Nicaragua and Peru.

The organizers of the Big Data Climate Challenge referred to the CGIAR work as a “uniquely innovative project that uses big data to drive climate action.”

“Climate change obligates us to manage our food systems in a more dynamic way, and big data offers the most effective way to achieve this,” said award co-winner Andy Jarvis, who is director of CIAT’s Policy Analysis (DAPA) Research Area. “Like the hoe and spade, these new tools are becoming crucial implements for global food production.”

Mr. Russell is the head of Communications and Knowledge Management at CIAT.