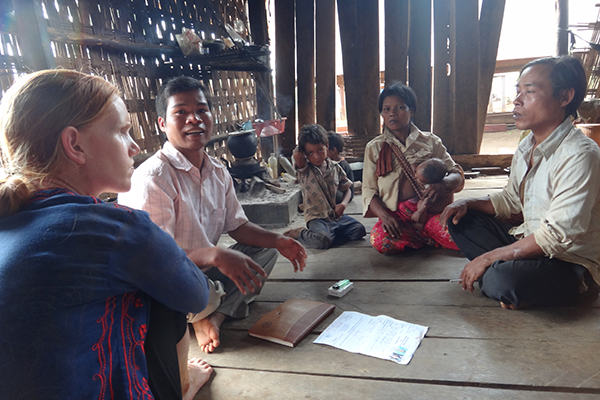 “My ARFUSA experience was extremely enriching for me as I continue with my PhD research on the gender dimensions of land reform in Cambodia.  It not only provided me with resources to undertake an extended period of research, but also connected me with a whole new network of  wonderful Cambodian and international scholars.”

Testimonials such as this one coming from Alice Beban, a PhD candidate in the Department of Development Sociology at Cornell University in Ithaca, New York, bring a smile to the face of Russell Freed, board chair of the Asia Rice Foundation USA (ARFUSA).

“I think ‘mission accomplished’ whenever I get one of these messages in my email inbox,” said Dr. Freed, whose day job is professor of international agronomy at Michigan State University (MSU) in East Lansing.

ARFUSA is made up of a group of mainly former staff members of the International Rice Research Institute (IRRI) who have worked and lived in countries where rice is vital for food and earning a livelihood. The most active country chapter under the umbrella of the parent Asia Rice Foundation (based in Los Baños, Laguna, Philippines), ARFUSA was founded in July 1999 at Cornell University by a small cadre of U.S.-based IRRI alumni.

The Foundation aims to contribute toward a world that can feed itself, treasure the rich heritage of different rice cultures, and value rice-growing land as a precious resource to be shared with future generations. Over the last 15 years, its membership has grown to include some who are retired in the U.S. and others who are still working at universities and organizations there.

The heart-blood of rice research and production

Dr. Freed worked as a rice breeder at IRRI in the 1970s, living in Sri Lanka, Indonesia, and the Philippines, before coming to MSU in 1980. “My 8 years with IRRI were some of the most exciting ones of my career—and life!” he stated. “Even after being away for 34 years, I consider myself a part of the IRRI family. Living in Michigan, my kids spell it E-R-I-E (referring to one of the nearby Great Lakes), but I spell it I-R-R-I,” he winked. “IRRI is the heart-blood of rice research and rice production around the world.”

Many other U.S.-based IRRI alumni, who have the same sentiment, make up quite an impressive list of ARFUSA trustee or council members. These include, among others, World Food Prize Laureate Gurdev Khush, currently adjunct professor at the University of California, Davis; Jim Hill, associate dean for international programs and extension agronomist for rice at U.C. Davis; Susan McCouch, professor of plant breeding and genetics at Cornell University; Ronnie Coffman, international professor of plant breeding and genetics and director of international programs at Cornell; and David Mackill, leader of the IRRI research team that discovered the now-famous SUB1 flood-tolerance gene in rice and currently rice specialist with the U.S.- based MARS, Inc.

“Like the SUB1 flood-tolerance research, there is much other tremendously exciting work involving rice,” said Dr. Mackill, vice chair of the ARFUSA board of trustees. “I think that, once students attending U.S. colleges and universities realize this and how critically important rice is to world food security and food production, they will become more and more excited about it and want to be involved.”

And that has been ARFUSA’s main goal since its inception—encouraging the next generation of rice scientists by making students aware of the unique opportunities in rice research and helping young U.S.-based scholars of any nationality to obtain some firsthand knowledge through its Travel and Study Grants Program.

A case in point is the experience of Ms. Beban, one of ARFUSA’s 2013 grant winners who recently reported her progress to Dr. Freed. “The ARFUSA travel grant has enabled me to go to Cambodia and conduct substantial fieldwork,” she said. “It allowed me to expand my research in exciting ways that I hope will be beneficial for Cambodian farmers and the organizations that support them.”

Ms. Beban, who hails from Levin, New Zealand, is trying to better understand how land reform affects livelihood strategies and household power relations of Cambodian rice farmers. “My PhD research is examining this land reform and the roles it plays in contemporary Cambodian politics, society, and ecology,” she says. “I had a chance to explore this issue with my ARFUSA award. I spent my time mostly in the ‘rice bowl’ region of Kampong Ch’hang, an area emblematic of national land use tensions between corporate agriculture and small-scale rice production.

“I conducted more than 80 semi-structured interviews and used ethnographic methods to gain the perspectives of government officials at both central and local government levels,” she pointed out. “I also got varied perspectives from people in communities where land titles were given out, as well as the views of the organizations working on land rights.”

Her initial findings suggest that land titling is equated with land security in the policies of the Cambodian government and donor agencies, but a title is just one vital part of land security. “I believe my data show that focusing only on the technical aspects of land registration, rather than the social aspects of land security, is not sufficient to enable rice-farming families to enjoy sustainable livelihoods from their farms,” Ms. Beban said.

She suggested that some important social factors should be considered. These include recognizing elite capture [where resources transferred for the benefit of the many are usurped by the “superior” few] and gender bias in land reform, and the strengthening of networks within communities.

According to Robert Zeigler, IRRI director general, ARFUSA can greatly expand its youth development efforts for international rice research. He believes the Foundation can do more than assist just a few students each year such as Ms. Beban and other recent grant winners.

Getting on the rice research bandwagon

“It is critical that we ‘grow’ the overall international rice research community and ARFUSA can and should promote the involvement of U.S. universities in such research,” said Dr. Zeigler. In fact, he is so fervent about what ARFUSA’s role can be in this arena that, even as busy as he is as IRRI’s director general, he agreed to serve as an ARFUSA trustee and attended the 15th annual meeting of the ARFUSA trustees and council members last July at U.C. Davis.

He concluded, “ARFUSA is all about fomenting a large number of U.S. university faculty and students to get on the rice research bandwagon to work directly with IRRI, the Africa Rice Center, and other international and national organizations.”

Mr. Hettel is the editor-in-chief of Rice Today and executive director of ARFUSA. For more information about ARFUSA Travel and Study Grants, see the announcement on page 46 and go to www.asiariceusa.org.