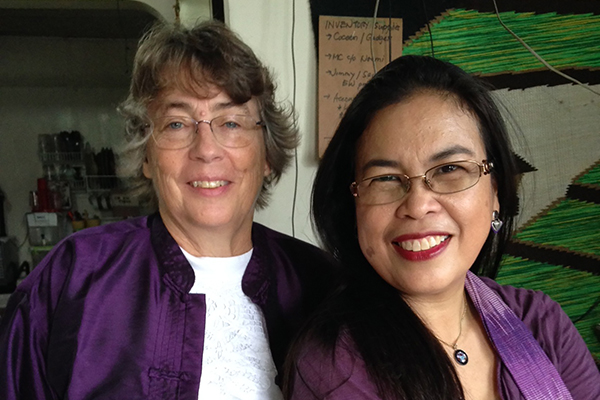 MARY HENSLEY (left) and Victoria Garcia have teamed up to bring Cordillera heirloom rice to the world. (Photo: Mary Hensley)

The jostling streams and golden patches that paint the scenery tucked deep in the crevices of the Cordilleras in the Philippines are common places in the bustling communities nearby. But to those who have never set foot in this world, shaped by the arduousness of the terrain and richness of its traditions, the Cordilleras are anything but humdrum.

Harvest time in Kalinga Province in the mountainous Cordillera region of the northern Philippines. Kalinga is one of the original regions of the Heirloom Rice Project designed to help local farmers increase production and assure the quality of their unique indigenous rice varieties. (Photo: © Dave Leprozo)

Mary Hensley, then a 22-year-old Peace Corps volunteer from Montana in the U.S., was one such person captivated by the land. Today, Ms. Hensley is the founder of Eighth Wonder Inc., which markets the traditional rice grown in the Cordilleras to the U.S., in partnership with the Philippines nonprofit RICE, Inc.

Ms. Hensley has not only brought the heirloom rice to the shores of the United States, but she created economic opportunities for what was previously regarded as a dying farming practice in the famed rice terraces that UNESCO declared a World Heritage Site in 1995.

And it all started with renewing old friendships in Kalinga Province, a familiar region where the Peace Corps had originally stationed her.

“It was usually the first question people asked me,” recalled Victoria Garcia, executive director of RICE, Inc., which successfully linked to the market. Reaching out to the farmers was hard because of the fragmented communities nestled in different corners of the mountain range.

“At a waiting shed, I’d usually strike a conversation with farmers waiting for transportation,” said Ms. Garcia. “My goal was to establish contact with one farmer and, eventually, he would take me to his relatives, and into their community. Sometimes, we went to farmers’ meetings organized by the local government. But mostly, it was farmer-to-farmer outreach. Mary happens to still have friends in the areas where she served decades ago. So, we started with them.”

“Hope pulled me in”

However, being accepted by the farming communities was just the beginning. “When the project started, it was like working with a clean slate,” Ms. Garcia recalled. “There was almost nothing to start with. Farm-to-market roads were few and there was no electricity to run the milling machines. I talked to the Department of Public Works and Highways, to the National Irrigation Authority, to electricity providers. The idea of quality had to be taught to the farmers.”

“There was a point in the beginning when Vicky said she could not do it,” shared Ms. Hensley. “She found it daunting.” But their common passion for community development got them through the moments of doubt.

“The farmers are really hopeful,” said Ms. Garcia. “They understood that they have a chance to preserve their traditions and heirloom rice. Now, they have a reason to continue planting.” The hope she saw in the farmers overpowered her initial reluctance. “I felt as though I was bringing the rain to them after a long time of living with parched dreams.”

The two women found an ally in UNESCO Ambassador Preciosa Soliven, who was, at that time, advocating for the preservation and restoration of the rice terraces.

“Their advocacy was not gaining much traction,” shared Ms. Garcia. “So, in 2006, when I heard that there was going to be a UNESCO workshop, I decided to attend, uninvited, and shared the idea of marketing heirloom rice.” At this point, partnerships started to take shape.

“Abraham Akilit, a former director of the National Irrigation Authority of the Cordillera Administrative Region and now mayor of the town of Bauko, immediately saw how the project complemented their work with farmer irrigators,” said Ms. Garcia.

In 2007, OB Montessori School, through Ambassador Soliven, donated more than PHP 100,000 (US$2,000) to RICE, Inc. Ms. Garcia used the fund to have a milling machine custom-made for traditional Cordillera rice varieties. “Experts at the Bureau of Postharvest Research and Extension and the Philippine Rice Research Institute provided technical assistance,” she said.

There is something romantic about the role heirloom rice plays in binding the indigenous communities of the Cordilleras. Reverentially selected and planted, their seeds are preserved and handed to the next generation. But to be part of the modern world, changes were necessary.

“Their rice is aromatic and beautiful. But the grains are of different sizes and broken,” Ms. Garcia added. “We provided training activities on quality control so they could produce unbroken, uniformly sized grains. We trained them to be good entrepreneurs. We taught them skills such as keeping tabs on how much they produce and managing their product.”

“Being sensitive to the culture of the different farmer groups is key to engaging them,” she added. “We want them to be better farm managers but without losing their identities and traditions.”

When orders poured in, farmers were asked to make “pledges.” The project shied away from getting “commitments” from the farmers, as this gives a sense of being “forced” to produce something. “The concept of preparing and processing more rice than they need for a couple of days is new to them,” said Ms. Hensley.

One of the good things that came out of this project was that the Department of Agriculture has institutionalized technology transfer sensitivities to the Cordillera farmers. “The government now recognizes that it must support the traditional way of farming” she said.

Ms. Garcia and Ms. Hensley are now working with the Heirloom Rice Project, funded by the Department of Agriculture and led by the International Rice Research Institute (IRRI). The Project seeks to widen the initial marketing success of Rice, Inc. and Eighth Wonder and bring the production of heirloom rice to the attention of the national government for developing policies for the industry. The Heirloom Rice Project will also systematically characterize traditional varieties of the Cordilleras and conserve them.

“A very important part of the project is helping farmers produce quality heirloom rice seeds, which help produce more for the market,” said Dr. Casiana Vera Cruz, a scientist at IRRI and overall leader of the Project. “We want to empower highland smallholders to manage their own enterprise, conserve their rice biodiversity, and preserve their cultural heritage.”

“We are excited to build upon the successes of Vicky and Mary,” said Dr. Digna Manzanilla, project co-lead and coordinator of the Consortium for Unfavorable Rice Environments at IRRI. “The Heirloom Rice Project, which pulls together government agencies, local government units, state colleges and universities, farmers’ groups, and private entities, stands to learn from their experiences in how to make the value chain work.”

The future of ancient rice

EXOTIC HEIRLOOM rice varieties from the Cordillera rice terraces of the Philippines now being purchased in specialty shops in the United States. (Photo: © OLIVE AND JOEL ENRIQUEZ)

When Ms. Hensley and Ms. Garcia started their project, they were told that they would fold up after 3 years. Now, they are in their ninth year of providing a sustainable livelihood to farmers in one of the most marginal rice ecosystems in the country. In 2013, 29 tons of Cordillera heirloom rice were shipped to the United States, valued at $38,079. This year, 19 tons valued at about $26,000 have been produced.

“I believe that the farmers in the project have found a new sense of pride in their culture and their work,” said Ms. Garcia.

That pride is palpable as one traverses the mountainsides of the Cordilleras—and it will save the treasured heirloom rice of the mountains.

Ms. Baroña-Edra is a science communications specialist at IRRI.