A dynamic research leader, a well-respected rice agronomist, a mentor to young scientists, a widely published author, and a loving family man, Marco Wopereis wears many hats and juggles them all with equal efficiency. 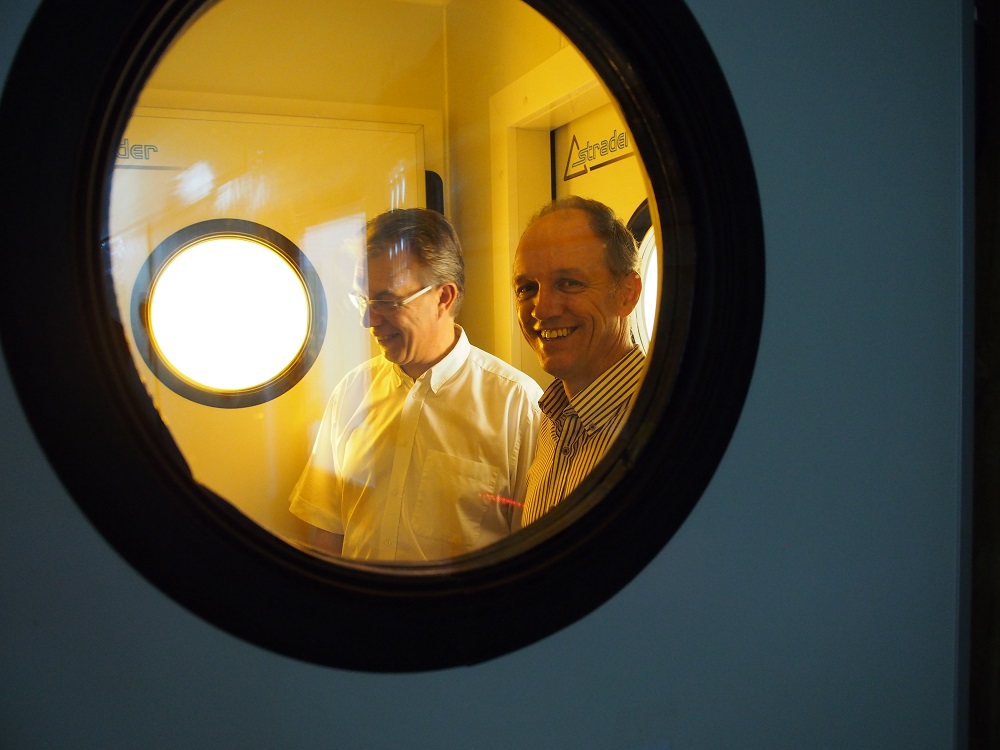 In January 2013, Martin Kropff, then CGIAR Consortium board member and future director general of CIMMYT, and Dr. Wopereis inspect a containment facility for rice pathogens and pests at AfricaRice in Cotonou, Benin. (Photo by R. Raman, AfricaRice)

Marco Wopereis, deputy director general and director of research for development at the Africa Rice Center (AfricaRice) since December 2007, is like a master juggler wearing many hats and juggling them all with equal efficiency.

He is a dynamic research leader, a well-respected rice agronomist, and a passionate spokesperson for issues relating to rice research and development in Africa. He is also a mentor to young scientists, a widely published author, and a loving family man. With an international research career spanning more than 25 years in Asia, Europe, and Africa, Dr. Wopereis is fluent in English, French, German, and Dutch, which is his mother tongue. He loves jazz and adores soccer, which he plays whenever he gets a chance.

In October 2015, Dr. Wopereis was appointed the new director general of AVRDC (The World Vegetable Center), starting on 21 April 2016.

“Marco has made significant contributions to AfricaRice, especially in establishing a solid scientific direction and foundation,” said AfricaRice Director General Harold Roy-Macauley in his congratulatory message. “He has played a highly significant role in leading the implementation of the research for development program, which has ensured a sound scientific position for AfricaRice in the global rice research arena and the achievement of important successes.”

Rooted in agriculture
Since his childhood, Dr. Wopereis has been associated with plants and soil as his parents ran a small nursery for ornamental plants. “The strong link our family had with plants and working outdoors greatly influenced me,” he said.

His father was a soil scientist working for the Dutch Soil Survey Institute. Therefore, it seems quite fitting that he would take up agricultural sciences following in his father’s footsteps. However, his first choice was to become a veterinarian.

Fortunately for the world of agronomy, Dr. Wopereis decided to take up soil science and fertilizer use instead as the veterinary institute was overbooked. He obtained his BSc and MSc (with distinction) degrees from Wageningen University in 1984 and 1988, respectively.

The rice connection
A few months later, Prof. Johan Bouma, his professor at Wageningen University who had seen signs of a promising agronomist in him, asked if he was interested in going to the International Rice Research Institute (IRRI) in Los Baños in the Philippines to coordinate a soil management project. Dr. Wopereis’s positive decision proved pivotal, both professionally and personally. “It was great to work at IRRI—great people, fantastic facilities,” he said, describing this golden period of his life.

His research focused on quantifying the impact of soil and climate variability on rainfed rice production. This work led to a PhD thesis, which Dr. Wopereis defended at Wageningen University in 1993. His stay at IRRI was very enriching at the personal level as well because he met his lovely wife, Myra, there.

A continental leap
Soon after this, Dr. Wopereis and Myra left for Africa, where he accepted an agronomist’s position at the AfricaRice (then WARDA) regional station in Saint Louis, Senegal. This was a huge change from the lush greenery of Los Baños to the Sahelian town of Saint Louis. But it was exciting, too.

The six years (1994-2000) he spent in Senegal and the following couple of years spent in Bouaké, Côte d’Ivoire, as the scientific coordinator of the Inland Valley Consortium convened by AfricaRice, were one of the most productive periods for Dr. Wopereis as a scientist.

He, along with his colleagues, showed that farmers in the Senegal River Valley could increase their yields by 1–2 tons per hectare by simply modifying their agricultural practices. The team developed integrated crop management (ICM) options and decision support tools for irrigated-lowland rice farmers, which were widely disseminated.

“I am certain that our team contributed to the rise in average rice yield from about 4.5 tons per hectare to about 6 tons per hectare observed in Senegal from the 1990s onwards,” explained Dr. Wopereis.

A thresher-cleaner developed by the team in 1997, based on an IRRI prototype, received the Senegal President’s award in 2003. Virtually all rice grown in the Senegal River Valley is threshed with that machine and there are now hundreds of these threshers in neighboring countries.

He also co-developed a participatory learning and action research approach for lowland rice systems focusing on ICM options, which was adopted in seven countries.

Outside the rice world
In 2002, Dr. Wopereis joined the International Fertilizer Development Center as program leader of the Integrated Intensification Program in Togo, focusing on integrated soil fertility management in maize, sorghum, and millet-based systems.

In 2005, he became director of the Annual Crops Department at CIRAD, the French development-oriented agricultural research organization.

Back to Africa
However, after 2 years, Africa and the rice world called him back. AfricaRice selected him to lead its research and development program toward the end of 2007. Dr. Wopereis’s passion for high-quality research and his drive to achieve impact in farmers’ fields brought positive changes in the AfricaRice research agenda and structure, contributing to the center’s achievements and continued relevance.

He and his research team, after extensive consultation with AfricaRice’s national partners, were instrumental in developing a product-oriented 10-year strategic plan with a major shift in focus from supply-driven research to more demand-driven research. The plan presented a clear vision of success to help Africa achieve almost 90% self-sufficiency in rice by 2020.

Another milestone was the publication in 2013 of Realizing Africa’s Rice Promise, for which he was the lead editor. This reference book provides a comprehensive overview of Africa’s rice sector and ongoing rice research and development activities, indicating priorities for action on how to realize the promise of rice in a sustainable and equitable manner.

He was able to build and lead effective teams to secure significant research grant funding for the Center to sustain a continuous portfolio of collaborative projects. Consequently, AfricaRice’s research and development activities, partnerships, and budget grew substantially during the last 10 years.

“One of the most rewarding experiences, without a doubt, is the establishment of the Global Rice Science Partnership (GRiSP),” said Dr. Wopereis.

Robert Zeigler and Papa Seck, former directors general of IRRI and AfricaRice, respectively, pioneered the idea of a worldwide partnership for rice research as early as 2007.

“It was in the office of then IRRI deputy director general for research, Achim Dobermann, that we sketched the contours of GRiSP,” he said, reiterating his conviction that GRiSP would outlast any other CGIAR Research Program. “It is essential that IRRI and AfricaRice work together for the benefit of rice farmers and consumers worldwide, particularly Africa.”

Speaking fondly of his strong bonding with Africa, Dr. Wopereis said, “I look back at my time in Africa with great satisfaction. It is filled with unforgettable experiences, friendships, and achievements through solid teamwork. Working in partnership has always been AfricaRice’s strong point.”