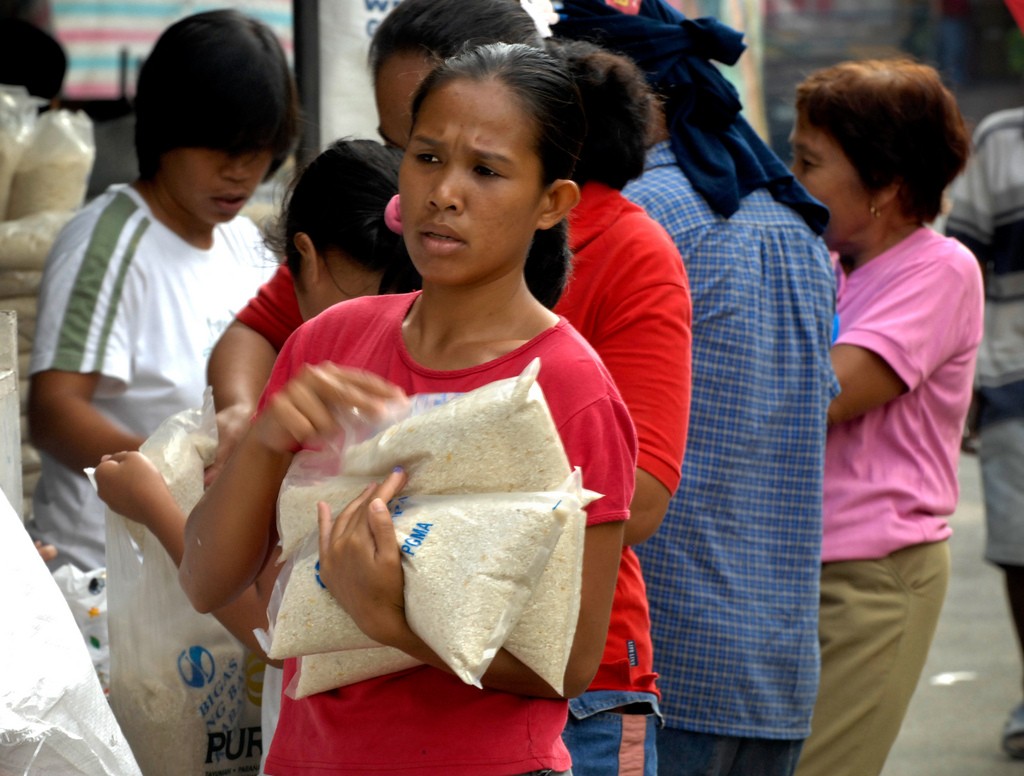 A Filipino woman collects subsidized rice at a market in Quezon City, Manila. High prices have hit the urban poor, many of whom spend a large proportion of their income on rice alone. (Photo: IRRI)

The 2007-08 rice price spike seems to have taken place ages ago considering the calmness in the rice market in the past few years despite El Niño and other weather-related scares. Rice prices in the international market have stabilized in the past few months after a steady decline prior to mid-2014 (Fig. 1, below). There has been some support for rice prices in the past few months because of weather scares such as drought in India, Indonesia, Thailand, and the Philippines, but this has not been enough to turn things around. 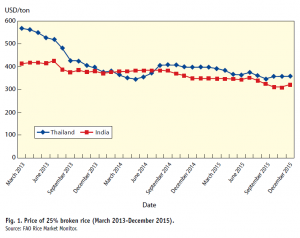 Despite the current stability in the rice market, there are reasons for concern about the medium-term (mid- to late-2016) direction of the market. The rice stocks of five major exporters (India, Thailand, Vietnam, Pakistan, and the United States) continue to slide since peaking at nearly 41 million tons in 2013 (Fig. 2, below). The biggest drawdown of stocks in these countries is underway this year, with a 40% drop from 2015, to reach 19 million tons by late 2016, according to USDA. 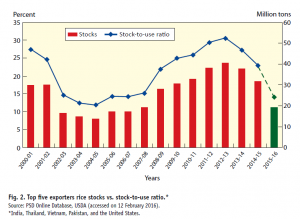 The majority of the 13 million tons drop in total inventory will come from the top two exporters, India and Thailand. To put things in perspective, the combined stocks of India and Thailand are projected to be around 16 million tons by the third quarter of 2016—around 70% lower than in 2013. With Thai rice stocks dropping to 5 million tons by late 2016, the buffer that the Thai mortgage stocks provided to the market in the past two years will be almost gone by the end of this year.

But, more significantly, India’s deteriorating grain situation is particularly worrisome to the market. In 2013, India exported 24 million tons of grains: 10.5 million tons of rice and 13.5 million tons of wheat and corn combined. In 2016, the combined exports of wheat and corn are projected to drop to 1.5 million tons because of weather-related supply problems. Some even predict that India will be a net importer of wheat and corn in 2016. The rice situation is not as bad as that of corn and wheat, but Indian rice exports are also expected to drop this year. The procurement stock as of 1 February 2016 was close to 29 million tons (milled rice equivalent), according to information available on the Food Corporation of India website (Fig. 3, below). The rice stock is not as much as it was three years ago but it seems to be at an acceptable level. 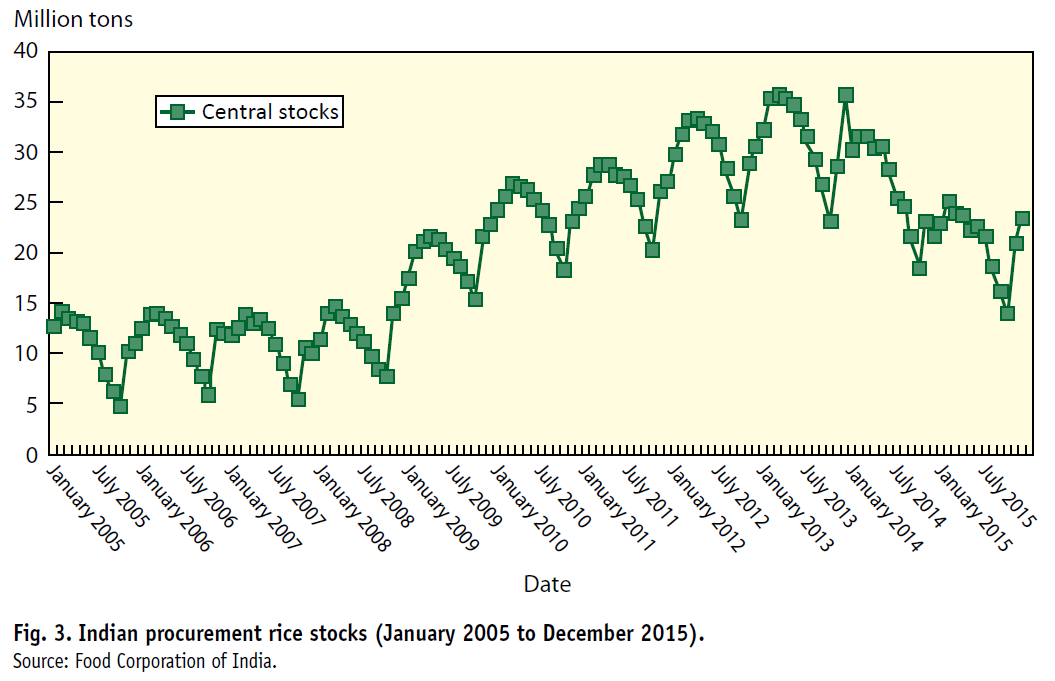 The problem for rice is likely to come from wheat, with an expected lower harvest in April and possible upward swing in the wheat price, which might drag rice prices upward, thus creating anxiety among policymakers. Ultimately, the 2016 wet-season rice crop, which accounts for nearly 90% of the total crop, will ultimately decide whether or not the government decides to restrict the flow of rice out of the country to stabilize domestic prices.

Uncertainty about India’s situation in the coming months does not augur well for the international rice market and global food security. Also, major Asian importers such as Indonesia and the Philippines are battling their weather-related supply uncertainty and low inventory and have been aggressively procuring rice from the international market. On the positive side, global wheat stocks, which were at a record 215 million tons in 2014-15, are projected to go even higher by another 24 million tons this year (Fig. 4, below). This should provide some limited protection for prices in case there is a supply concern for rice in Asia in 2016. 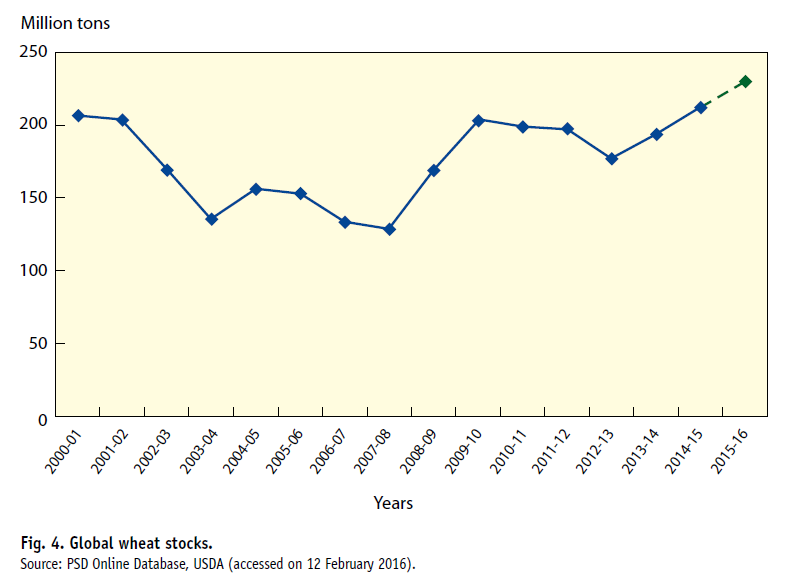 It will be an interesting few months for the global market, which faces a tight supply situation for the first time since 2007-08. If the 2016 wet-season crop turns out to be normal in the major rice-growing countries, then the pressure on rice prices will be significantly relieved, and the market will likely remain fairly stable through early 2017. However, if the season is rocked by some major weather events such as drought, cyclone or typhoon, and flooding in a few major countries, the mettle of the market will definitely be tested. With limited Thai rice stocks in the warehouse, it remains to be seen how major exporting and importing countries react to such uncertainty. If they panic similar to 2007-08 and resort to excessive buying and export restrictions, then another price spike is in the offing. However, if they keep their cool and remain rational regarding their needs, the market price may still go up, but up only to a level that is consistent with market fundamentals.

Dr. Mohanty is the head of the Social Science Division and program leader (Targeting and policy) at the International Rice Research Institute.