Neneng Wadingan once left her hometown to seek greener pastures abroad, a dream shared by many Filipinos. But she found her true calling and economic success when she returned to tend her ancestors’ land and heirloom rice. 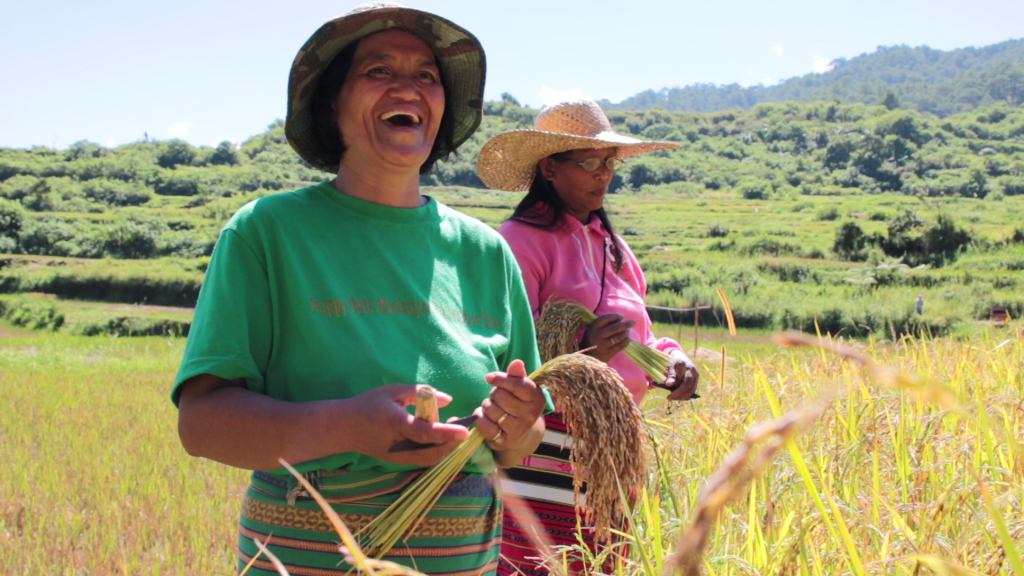 Neneng Wadingan (in green) reaps the rewards of her hard work and perseverance.

Finding work outside their country has become the economic Holy Grail for multitudes of Filipinos. It is a dream they dream despite the stiff price that comes with it: particularly the painful distance that comes between them and their family. Accounts of how, for some, the ticket out of poverty turned out to be a one-way ticket to tragedy are often ignored. Even the sensational crash-and-burn stories that set off media firestorms and national uproars eventually fade and fail to dissuade many Filipinos from pursuing that hope of improving the lives of their loved ones.

Saturnina “Neneng” Wadingan from Bauko, Mountain Province in the Philippine Cordillera Region, held the Holy Grail in her hand not once but twice. By local standards, Neneng has it made. She was living the dream of the masses. But she had to let it go when her parents, who were becoming too old to tend their family rice farm, asked her to come home and take over.

Neneng, as most Filipinos are wont to do, returned to her hometown out of respect for her elders.

I met Neneng when I joined a team from the Heirloom Rice Project, a collaborative activity of the Department of Agriculture and the International Rice Research Institute, to interview some heirloom rice farmers in the region. The team was documenting rice farmers in the region, documenting their experiences and seeking their opinions on how the project could further help them. 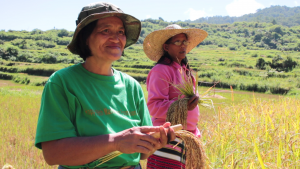 Yet, she started out as a reluctant farmer. Because all her siblings had relocated elsewhere, the responsibility for running the family farm fell on her shoulders. At the time, Neneng was based in Baguio, a thriving metropolis in the neighboring province of Benguet, where she sold vegetables and real estate.

“I didn’t do any full-time farming before,” she recalled when she returned to Bauko to help her parents with the farm. “At first, I wanted to cry. I asked myself ‘What is this work?’ I couldn’t accept it. But I helped in planting our field with rice.”

In 2008, after planting a crop of rice, Neneng left her hometown to work in Macau on the southern coast of the People’s Republic of China. But she couldn’t take her mind off their farm. “I returned after a month and a half because my father said the rice crop I planted was growing very well. Just looking at the rice plants filled me with joy.”

After harvesting that crop, she planted rice again—and then she left to work, this time in Shanghai. Six months later, she returned when her father died.

“Before my father died, my parents would ask me about what would happen to our farm if no one took care of it,” she said. “They were hoping I would stay since I was the only one in the family who seemed interested.”

The following year, her mother passed away. Neneng knew she had to continue their legacy. Like her parents before her, She became her generation’s family farmer, taking care of the land that she and her siblings had inherited.

Land, seed, and wisdom
Land was not the only thing her parents left her. “They always stored the seeds of several rice varieties they had been planting all these years. They carefully kept them inside plastic drums and labeled them properly.”

These seeds include rice varieties with exotic names such as Balatinaw, Gilgilan, Lad-ukan, Intan-dolimas, Oskil, Apolog, Gudalakan, Balahangoy, Buyaw, and Pat-ungay. The lineages of these varieties are so old they have been lost even to Neneng. All she knows is that they were the rice her ancestors planted on their farm. “All municipalities and provinces have their own varieties,” Neneng said. “The seeds come with the land.”

In her element
The Neneng I met was not the same disheartened farmer on the verge of tears. This version of Neneng was confident and totally in her element working on their farm. She took us to their rice field that, together with the farmlands of others, formed the famed rice terraces. Her expertise was very apparent. She was an authority on the profuse assortment of traditional rice varieties and the right time for sowing a particular variety. She was an expert at selecting the seeds for the succeeding planting season, the right time for harvesting, and the proper drying of the grains. She holds a body of knowledge that, like her land and seeds, is a form of birthright. 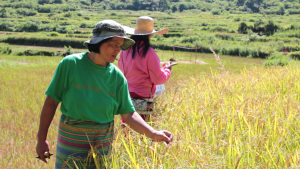 From a hesitant farmer, Neneng has become confident community leader and totally in her element working on their farm.

“I finally focused on farming in 2009 after I met Vicky Garcia,” she said. Ms. Garcia established Philippines nonprofit RICE, Inc. to preserve heirloom rice grown in the Cordillera region as well as the culture of the rice-based community. Ms. Garcia helped create an export market for the heirloom rice through Mary Hensley, founder of Eighth Wonder Inc., which sells the rice in the U.S. “Vicky told us that we were planting heirloom rice. We didn’t know that. To us, it is rice that we plant and eat. I was inspired by what Vicky said about our rice being more nutritious and aromatic.”

Tradition and innovation
Neneng stayed faithful to the traditional organic farming methods of her parents such as using the sunflower plants that grow ubiquitously in the area as fertilizers. “My parents never used chemical fertilizers. They used natural farming,” she said. Before the planting season, they would place the cut stems and leaves of the sunflowers as well as weeds into their flooded field until they disintegrated and became part of the cycle of life.

However, she is not afraid to try new things. “I like to test things see what works and what not to do.” Neneng recalls how farmers were once encouraged to plant modern high-yielding varieties instead of their heirloom rice. “They said our rice produced only a few tillers. So, I did some experimenting on my own. If an heirloom rice variety produced only 2 tillers I would plant 2 seedlings so together they would produce more tillers. I also found that applying compost at the right time will make a single heirloom rice plant produce up to 4 tillers.”

Even golden apple snails do not faze Neneng. This invasive species was introduced into the Philippines in the 1980s. The plan was to raise the snails for export to the European market. When that didn’t pan out, the goldmine turned into a biological debacle. The snails—which escaped or were discarded—reached the perfect environment for breeding and feeding: rice fields. With their rapid reproduction, they can reach population levels that can decimate entire rice crops. Today, golden snails have become a dreaded, serious pest in many rice areas in Asia. Neneng turned the golden apple snails into nutritious lemonade—for her crop, that is.

“When we see a lot of golden snails, we put a net trap in the middle of the field and use sweet potato leaves as bait,” she said. “When all the snails have flocked to eat the bait, we just pull up the net and harvest them. Then we ferment and spray them on our rice plants 3 months after transplanting.” The snails’ high protein content makes them cheap but effective nourishment for the rice seedlings.

Although it may make other rice farmers wince, Neneng would actually put golden snails in her field! “Snails can be useful, too,” she said. “When there are no more golden snails in the field, we put a some of them back when our transplanted rice is too big for the snails to eat. The snails help us clear the field of weeds.”

Born to lead
Although she started out as a hesitant farmer, Neneng eventually assumed a leadership role in her community.

The export market demand for the purple-colored Balatinaw, the heirloom rice that she and other farmers sell to Eighth Wonder, brought significant economic benefits. Every year, she is able to supply around 100 kilos of processed Balatinaw for export valued at about USD 170, which is twice the price of “nonfancy” varieties. The rest she sells in Baguio. “I can save money for my family’s needs, especially for my children’s education. My son was able to finish school because of heirloom rice.”

Neneng now sees heirloom rice farming as her ticket to a better future.

“I noticed the lives of rice farmers started to improve as more people started buying heirloom rice,” she said. “I realized that our heirloom rice was important to our community. We need to keep planting them because some varieties are starting to disappear. We need to share the seeds  with other farmers and the rice with consumers who want to buy them.” 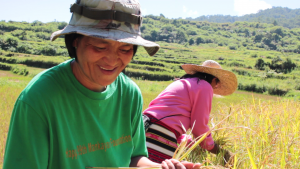 Thanks to heirloom rice Neneng is able to save money her family’s needs and her children’s education.

Neneng not only shared some of her inherited seeds, she also shared her know-how and even organized the farmers who were willing to plant heirloom rice. This informal group became the Blooming Hills Rice Terraces Farmers’ Cooperative which is officially recognized by the Philippine government. It currently has 56 members. “I wish more farmers would join us. That would make me very happy.”

Although farmers like her are reaping the rewards of the growing popularity of their heirloom rice, Neneng knows there is much room for improvement.

“We need financial help from the government,” she said. “Yes, we have rice and land but we don’t have enough money for farming. We need money to purchase water buffaloes for plowing, not tractors— because they are not suited for our terraced farms.”

In recent years, they have started to experience water shortage. Neneng recommends an irrigation system so that all farmers can have access to this important resource.

“Our association could also use a portable thresher with a blower that we can bring closer to our rice fields so our farmers can minimize their postharvest losses. A collapsible drying canvass will be very helpful so that we can protect our harvested grains if it suddenly rains.”

Home at last
At one point, Neneng found herself thousands of kilometers from her hometown pursuing a dream out of necessity. Upon her return, she realized that her heart and her soul had never really strayed far from the rice fields of her ancestors. Neneng, the heirloom rice farmer, is now where she wants to be. She is where she is needed. She is finally home.

The Heirloom Rice Project is an initiative under the Food Staples Sufficiency Program of the Philippine Department of Agriculture. With support from the various agencies of the Department and IRRI, this collaborative project aims to enhance the productivity and enrich the legacy of heirloom or traditional rice through empowered communities in unfavorable rice-based ecosystems. It holds the promise of becoming a remarkable endeavor for culturally rich communities in isolated regions of the world, particularly the hinterlands of Asia, Latin America, and Africa.