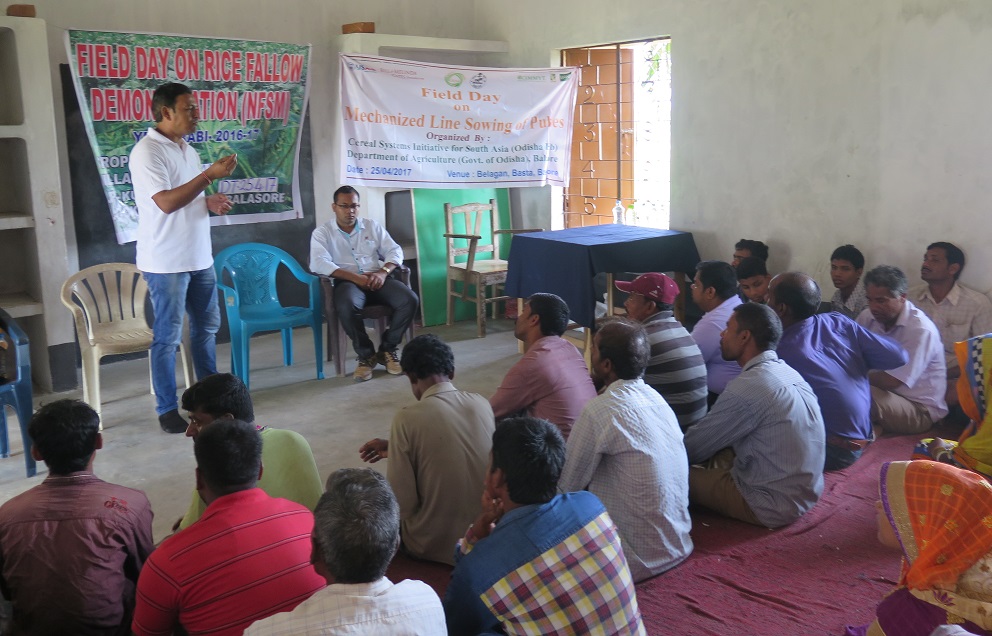 The Department of Agriculture (DoA) of Odisha is promoting improved management practices in rice-pulse cropping systems to increase the productivity of fallow areas and boost farmers’ incomes. The DoA is encouraging the cultivation of pulses as rice fallow crops under National Food Security Mission and Bringing Green Revolution to Eastern India. The DoA is also intensifying rice-fallow systems through mechanization and best management practices in pulses in collaboration with the Cereal Systems Initiative for South Asia (CSISA).

Based on farmers’ field demonstrations at various locations and adaptive research trials conducted by DoA through CSISA, the use of improved agronomic practices could significantly improve productivity and profitability of pulses.  Line sowing using a seed-cum-fertilizer drill ensures optimum row spacing, seed rate, seeding depth, uniform germination, and plant population. The equipment also assures the proper placement of fertilizer, facilitates manual and mechanical weeding, and improves the use of residual soil moisture through an early sowing after paddy harvest. Consequently, the use of the seed-cum-fertilizer drill and best management practices could lead to higher yields compared to the traditional broadcast sowing and poorly managed crops.

The varieties of pulses cultivated in Odisha include pigeon pea, green gram, black gram, horse gram, chickpea, cowpea, field pea, and lentil. Overall, pulses are grown in over 2 million hectares with a total production of 1 million tons. The crops are planted in almost 70% of that area during the rabi season with an average production of 481 kg/ha, which is half of the national average of 823 kg/ha. Post monsoon rains, mostly govern the cultivation of rabi pulses in rice fallows. Areas under rabi pulses remain at around 1.4 million hectares but can be expanded to about 1.2 million hectares of rice-fallow areas.