One of the important achievements of the year was the identification of certain selections from the Institute’s breeding program which were sufficiently outstanding to warrant testing throughout the tropical and sub-tropical rice-growing regions. One of the best selections resulting from the crossing of Peta with Dee-geo-woo (a short indica variety from Taiwan) was IR8-288-3. This line has high-yielding ability, some resistance to the tungro virus disease, is short and nitrogen responsive, and has desirable cooking and eating qualities. 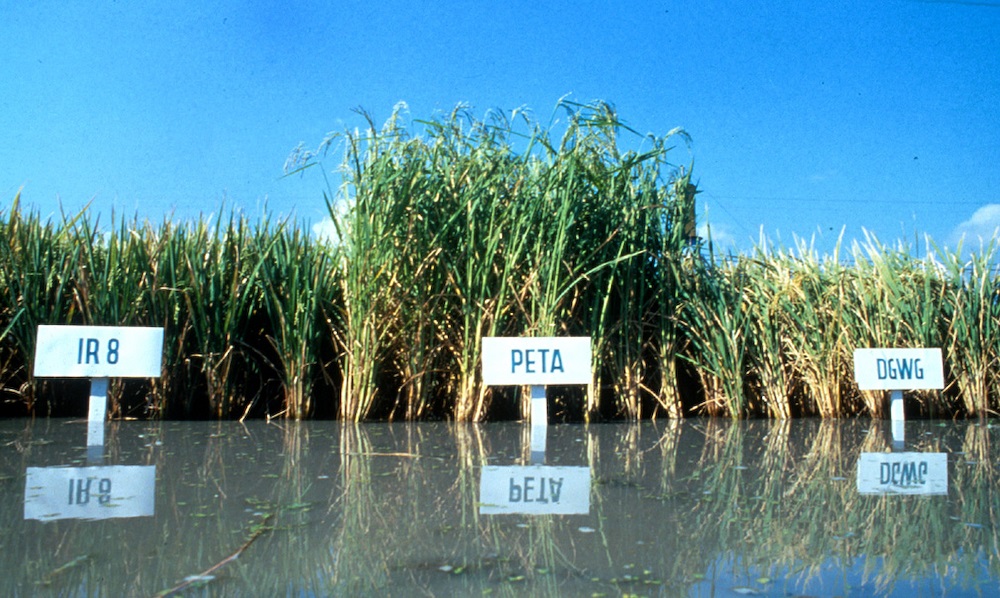 One of the important achievements of the year was the identification of certain selections from the Institute’s breeding program which were sufficiently outstanding to warrant testing throughout the tropical and sub-tropical rice-growing regions. Most of the selections sent to other areas have been in the F6 or F7 generation. Although by the end of 1965 more than 570 crosses had been made, it was only the progeny of crosses made in 1962 that had become sufficiently stable to permit appropriate evaluation and widespread testing.

The three selections that seemed particularly outstanding under Philippine conditions and, at this stage, especially on the Experimental Farm, are IR8-288-3, IR9-60, and IR5-47-2. It happens that each of these three lines have the variety Peta as one of the parents. Feta is a tall, tropical indica variety with high vigor, seed dormancy, and resistance to certain important diseases. It was developed in Indonesia but is now one of the Seed Board varieties in the Philippines.

One of the best selections resulting from the crossing of Peta with Dee-geo-woo (a short indica variety from Taiwan) was IR8-288-3. This line has high yielding ability, some resistance to the tungro virus disease, is short and nitrogen responsive, and has desirable cooking and eating qualities. The crossing of Peta with I-geo-tze, another short indica from Taiwan, also produced a promising selection, IR9-60. It has fairly high seed dormancy, is short (95 cm high), non-lodging, and nitrogen responsive. In many trials, it has yielded between 6,000 and 7,000 kg/ha under good management. The IR5-47-2 selection is a cross between Peta and Tankai Rotan, a relatively tall indica variety from Malaysia, selected as a parent because it was not as tall as most indicas and, in early trials, appeared to be vigorous and nonphotoperiod-sensitive. The IR-5-47-2 is a line of medium height (138 cm) and maturity (132 days) and appears to be rather resistant to the tungro virus disease and to bacterial leaf blight. In recent preliminary yield trials, it has produced over 6.5 metric tons per hectare in the monsoon season. It is now being widely tested in Southeast Asia.

It is perhaps no coincidence that these three outstanding selections are pure indicas: there are no japonica varieties in their ancestry. They have high seedling vigor (specifically high tillering ability) and superior qualities of disease resistance, characteristics which perhaps are more easily obtained from crossing indicas with indicas. In any case, it seems clear that the breeding program of the Institute could not have made such rapid strides in the early stages if the short indicas from Taiwan with the single recessive gene for shortness had not existed. 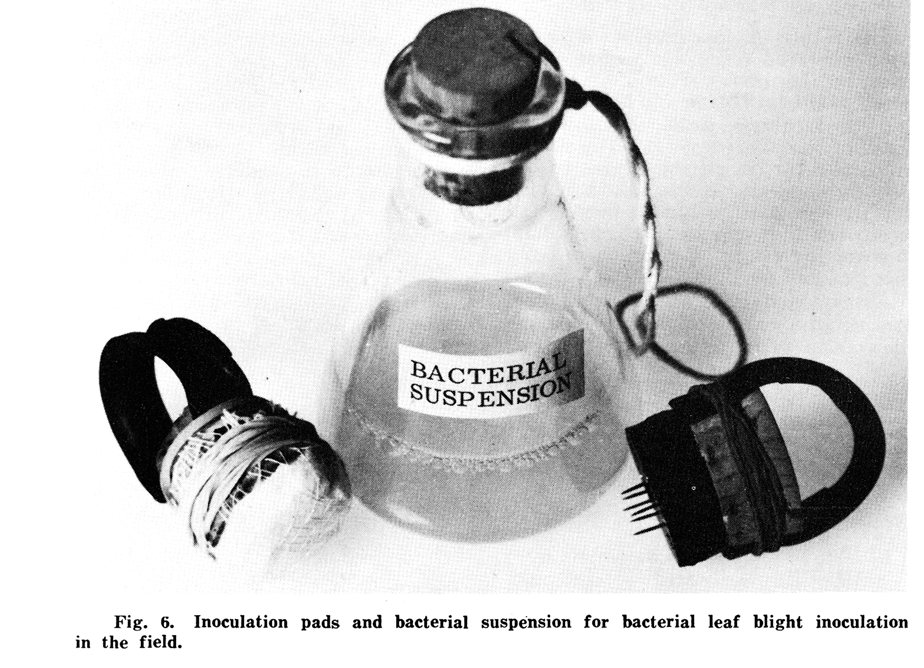 The varietal improvement program has developed a series of lines with a desirable plant type, rather good grain qualities, and high yielding ability. The big task ahead is to introduce disease resistance into the already established selections, particularly resistance to bacterial leaf blight, the tungro virus disease, and the rice blast disease, the latter resistance to be as broad as possible because of the various physiological races. During 1965, much of the basic work was completed on the gamma isomer of benzene hexachloride (lindane) as a systemic insecticide for rice stem borer control. It has been generally established that, under Philippine conditions, when this insecticide is applied to the irrigation water every 30 days at the rate of 2 to 3 kg/ha, the pest is successfully controlled. Naturally, the method must be tested widely in other countries where the species of the stem borer and the degree of water control may be different from those in the Philippines.

Work on the application of other chemicals, such as diazinon, to the irrigation water is proving so successful that in the near future the lowland rice farmer may be able to discard his sprayer and apply all of his insecticides in a granular form with no more equipment than is needed to broadcast fertilizer.

During 1965, Institute agronomists obtained the highest average yields ever achieved at Los Banos. In the dry season, when yields are always the highest, many experimental plots produced at the rate of 6,500 to 7,500 kg/ha, and seven varieties each yielded more than 8,000 kg/ha. Even during the cloudy monsoon season, yields ranged from 4,500 to 7,000 kg/ha, with many being between 5,000 and 6,000 kg/ha. Under continuous cropping, three crops of rice totaled 17,800 kg/ha in 384 days, an average grain production of 46 kg/ha per day.

These high yields can be attributed partly to the absence of typhoons and to a lower than average rainfall, but, also, partly to better control of insects and to the more general use of short, stiff- strawed varieties that respond to nitrogen without lodging.

Another innovation was the design and use of an electric fence for controlling rats on the experimental fields. Rats have been a serious problem ever since the Institute started its program. In January, the superintendent of our Experimental Farm proposed that a low fence made of chicken wire be electrified at night by storage batteries, but with the current amplified to either 110 or 220 volts a.c. This procedure proved to be successful and during the 12-month period beginning in mid-January, more than 22,000 rats were killed on the 80-hectare field.

The agricultural engineers designed and built a set of special lug wheels that can be mounted on the inner and outer sides of the rear rubber tires of 40-60 Rph tractors. With these wheel attachments, and a 300-cm rotary tiller made in our shop and mounted on the rear of a tractor driven, of course, from the power take off — an excellent job of wetland preparation can be done. The designing of this equipment marks a forward step in solving the problem of mechanizing paddy land preparation. 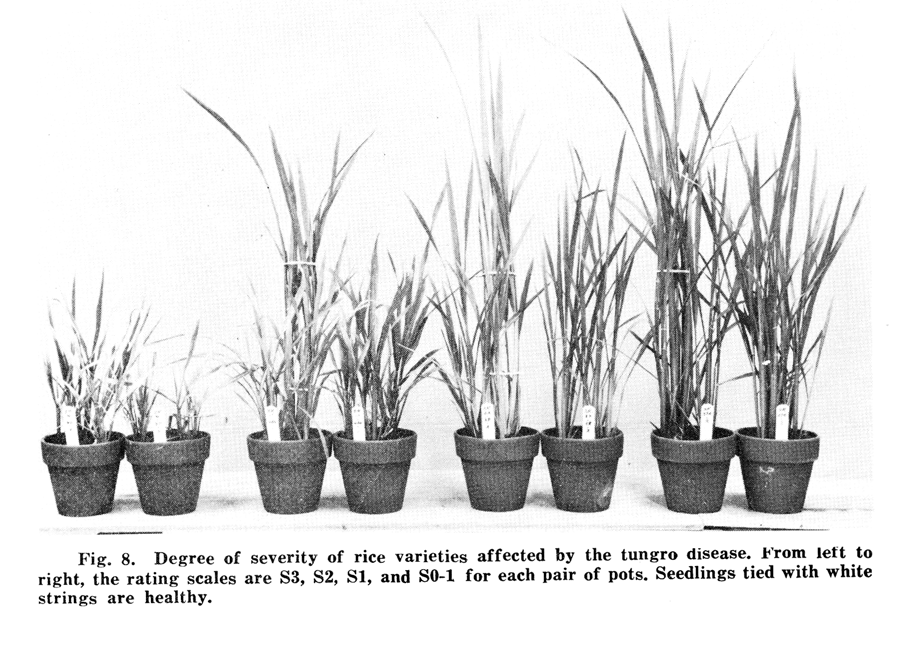 The plant pathologists have screened many thousands of varieties and genetic selections for the three most common rice diseases: rice blast, bacterial leaf blight, and the tungro virus. Varieties resistant to each disease have been found, thus identifying materials that can be used in the breeding program to introduce disease resistance into otherwise improved varieties.

The Office of Communication, in addition to editing and preparing for publication the writings of the scientific staff, carried on an effective training program for extension workers. Those who received this instruction, which ranged from 6 to 12 months duration, could be classed as rice production specialists. They not only gained practical experience in every operation connected with growing a rice crop but also obtained a good understanding of the scientific basis for modern rice production practices.

Furthermore,  they learned how to layout, on farmers’ fields, applied research plots to determine the extent to which certain modern rice-growing methods and the newer varieties could increase rice yields in specific environments. When successful, these plots are followed by demonstration and instructional activities to teach and motivate farmers.

In addition to conducting this training program, the Office of Communication worked closely with the Commission on Agricultural Productivity (the extension arm of the Philippine government) and the Bureau of Plant Industry in establishing applied research plots in many parts of the Philippines.  These field experiments were conduct-
ed primarily to test the effectiveness of lindane and of several improved rice varieties under various conditions that exist in the Philippines.

The training of rice production specialists and the establishment, in cooperation with government agencies, of applied research plots throughout the Philippines constitute a pilot effort to asses whether such methods can have a measurable impact on national yields.