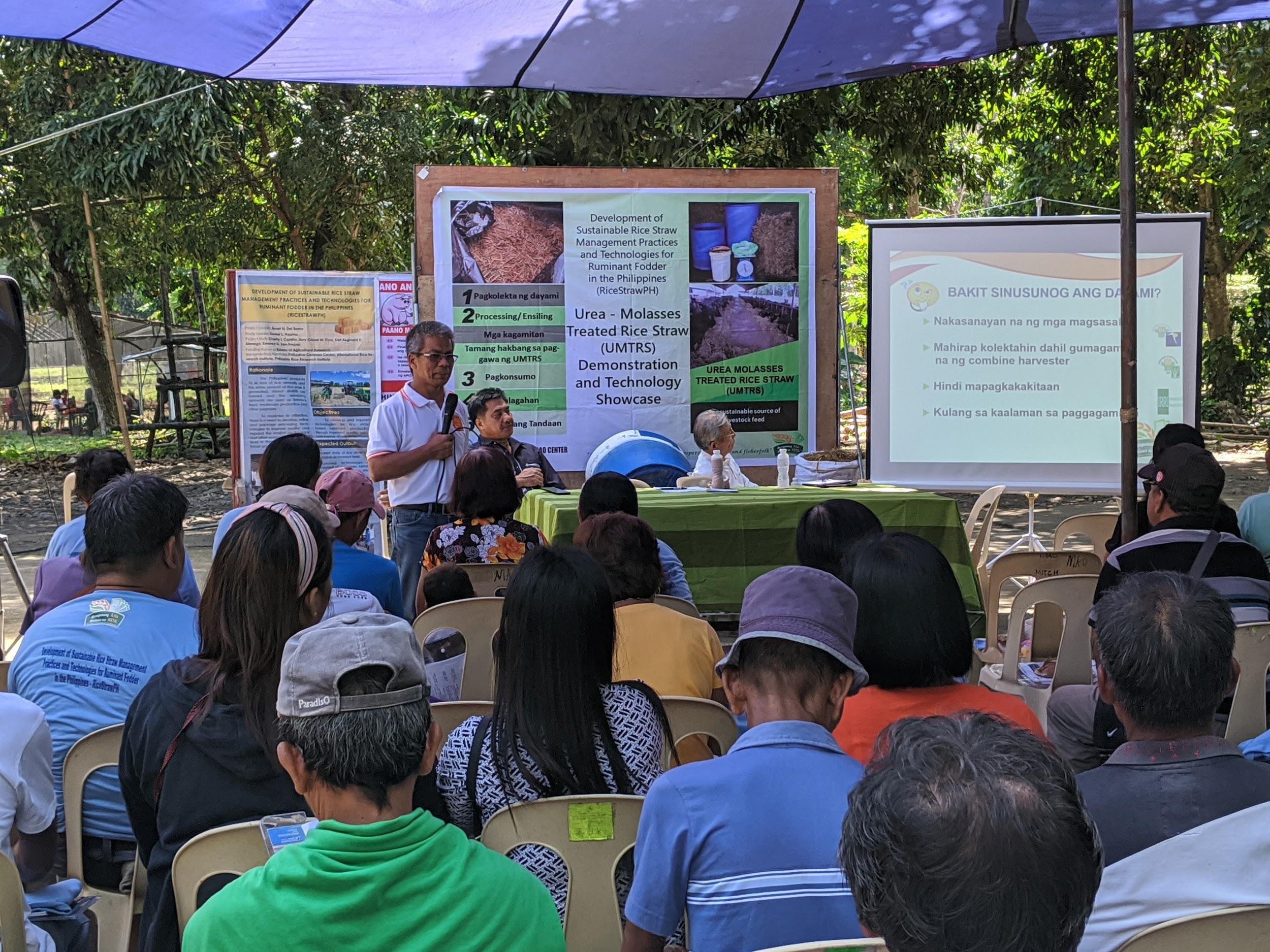 Ruminants like cattle, carabao (water buffalo), and goat are an efficient way to produce food because, unlike swine and poultry, they efficiently convert even low-quality plant residue into meat and milk. As such, ruminants are not only an important source of nutrition and income for farmers but also help address the need for more sustainable agricultural systems by reusing agricultural by-products such as rice straw.

Although, ruminants can thrive on rice straw as a low-cost fodder, improving its nutritional content and palatability can lead to higher production and profitability. According to the Philippine Carabao Center (PCC) treating rice straw with feed additives such as urea and molasses enhances milk production and promotes better digestion.

Better fodder
To this end, the Bureau of Agricultural Research under the Philippine Department of Agriculture (DA) funded a project called the Development of Sustainable Rice Straw Practices and Technologies for Food, Feed and Bioenergy in the Philippines (RiceStrawPH). Implemented by the International Rice Research Institute (IRRI) in partnership with the Philippine Rice Research Institute (PhilRice),  PCC, and the Philippine Center for Postharvest Development and Mechanization (PhilMech), RiceStrawPH conducted a demonstration and technology showcase on enhanced feeding management practices for urea-molasses treated rice straw (UMTRS) for ruminant raisers at the Municipal Agricultural Office in M’lang, North Cotabato in February 2020.

About 100 farmers and local government officials from the municipalities of Matalam, Tulunan, and M’lang in North Cotabato and Lake Sebu in South Cotabato attended the UMTRS technology demonstration.  The technology demonstration, facilitated by the team of experts from PCC in collaboration with IRRI’s Mechanization and Postharvest Cluster, featured hands-on activity on preparing UMTRS.

The farmers welcomed the hands-on exercises which were facilitated by the PCC team. The exercises provide the participants with the experience of mixing the proper ratio of ingredients for ensiling rice straw. The farmers were also taught how to prepare total mixed ratio that includes ensiled rice straw, grass, and concentrate feeds as a recommended feeding formulation for ruminants. The participants welcomed the technology that allows them to upcycle rice straw into feeds and get extra income from raising ruminants.

An open forum was also held to engage the participants and get an insight on real-world conditions that may hamper the adoption of the technology. For example; one farmer raised the issue on the difficulty of collecting rice straws in the field after being harvested by combines.

Carlito Balingbing, a scientist at the Mechanization and Postharvest Cluster, provided a brief overview and video presentation on mechanized rice straw collection with a baling machine as a solution to the difficulty in collecting scattered straws in the field.

“Potential business models could be established on mechanized rice straw collection services as well as the government mechanization program,” said Engr. Balingbing. “These could provide access and opportunity to farmers who have no capital to buy the machines.” 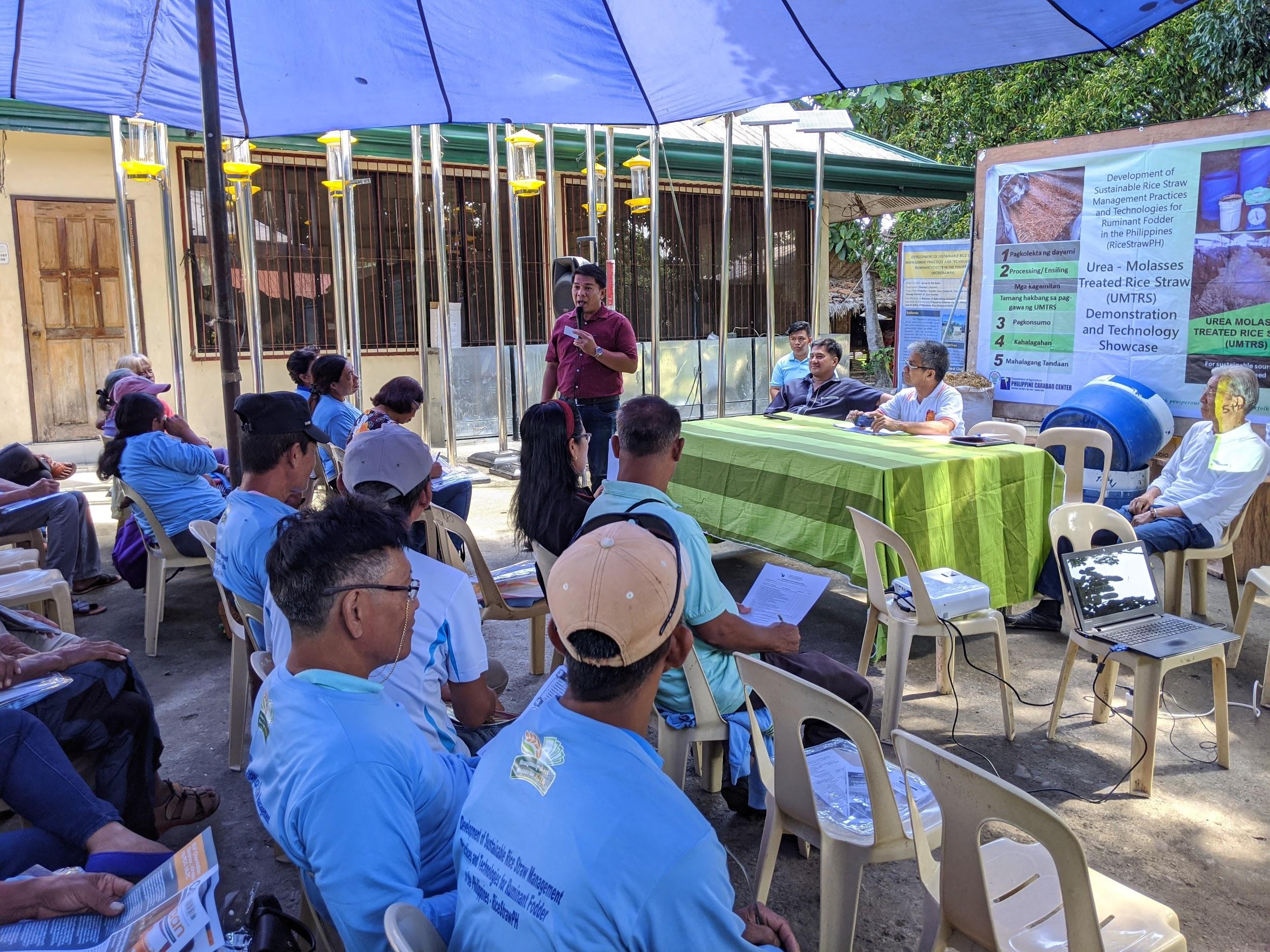 It also violates the Philippine Clean Air Act of 1999 that outlines the government’s measures to reduce air pollution and incorporate environmental protection into its development plans. It prohibits, among other things, open-field burning, including burning of rice straws.

Arnel del Barrio, lead of the PCC team of RiceStrawPH recalled the tall order he received from former DA Secretary Emmanuel Piñol, who hails from M’lang, to find a solution to the rice straw burning in North Cotabato. The program also supports the twin goal of the DA which is to increase the yield and income of the farmers.

“When we assessed the situation here for the RiceStrawPH we observed many carabaos, cattle, and goats in poor condition,” Dr. del Barrio said. “The solution was to utilize the rice straw as livestock feed is timely. I can say to my former boss, I have accomplished your order. ”

“UMTRS is a perfect alternative for farmers who burn rice straw in the field,” said Caleb Aaron Fabila, the municipal agricultural officer. “UMTRS and silage can augment the feeds to the livestock of the farmers which is a welcome development for us.”

Russel Abonado, the mayor of M’lang, appreciated efforts of the RiceStrawPH for showcasing the UMTRS technology in their municipality. “It complements the effort of the local government unit’s implementation of the Clean Air Act that bans the burning of rice straw in the field which a common practice among farmers,” said Mr. Abonado.

“This is very interesting because here in our municipality, there are many farmers who burn rice straw because it is the fastest and cheapest way to manage the field,” Mr. Jody Umapas, a board member at the BIMADO Irrigators’ Association.

Benjamin Basilio, director of the PCC-USM Center, appreciated the contribution of RiceStrawPH to their province and lauded the farmers’ active participation in the technology demonstration.

“I challenge our participants to be the instrument in disseminating the knowledge to other farmers that they can derive income from rice straw instead of burning them on-site,” said Mr. Basilio.