The Institute inaugurated in midyear a program to train a limited num­ber of rice production specialists and to assist Philippine government agen­cies in their program to help farmers adopt modern methods of rice produc­tion and thus increase rice yields. The Institute staff believes that not only must it concern itself with developing new knowledge and plant materials but it also should contribute toward the use of such knowledge and materials in agricultural development. 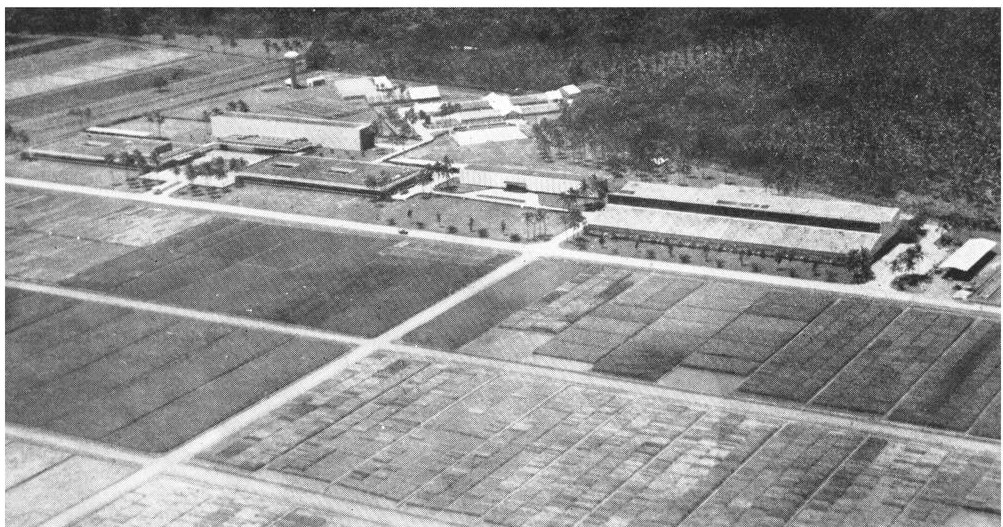 Aerial view of the Institute buildings with hundreds of varieties from the world collection grown in the right foreground. (Photo: IRRI)

Director’s Introduction
The varietal improvement program continued to receive strong emphasis because of the urgent need for high-yielding, non-lodging varieties that respond in grain yield to high rates of fertilizer application. As stated in previous reports, these varieties should have short stature (preferably being not more than 100 cm tall), stiff straw, short and upright leaves, resistance to important diseases, seed dormancy at harvest time, moderately firm thresh-ability, and cooking and eating quality characteristics acceptable to the consumers of Southeast Asia.

During late 1964, the first series of hybrid lines resulting from crosses made by Institute plant breeders were put into yield trials. Some appear to be highly promising. In addition, a group of japonica-indica crosses, made and purified by the plant breeder when he was in Texas several years ago, were grown at Los Banos. Several of these yielded so well that seed is being increased for wider testing in the Philippines and elsewhere.

The problem of disease resistance is receiving increasing attention by plant breeders and plant pathologists because of the increasing incidence of several virus diseases, as well as bacterial leaf blight and bacterial leaf streak. It ap¬pears rather certain that virus disease-resistant lines can be developed, but the situation is not so clear with respect to developing rice varieties resistant to the bacterial diseases. 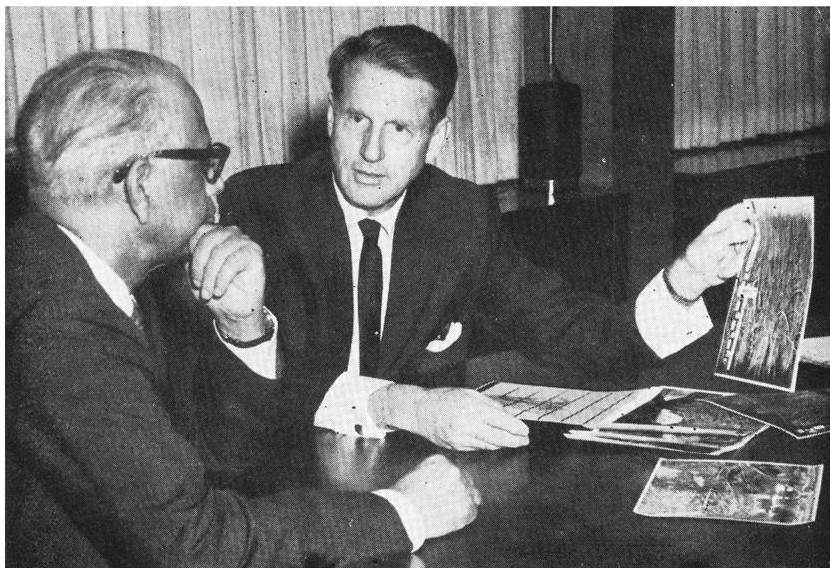 The Director General of the Food and Agriculture Organization of the United Nations hears the Institute Director outline the need for tropical rice varieties with short, stiff straw and resistance to insects and diseases. (Photo: IRRI)

.
One of the outstanding achievements of 1964 was the further classification by the plant physiologists of the rela­tionships among plant type, photosyn­thesis, nitrogen utilization, and grain yield. As reported in the plant physio­logy section of this report, there is ade­quate evidence to state conclusively that the efficient utilization of available sunlight is essential for good yields during the monsoon season.

Furthermore, this can best be done by changing the plant type so as to reduce mutual shading to a minimum, but still maintaining sufficient plant size and the grain-straw ratio essential for good yields. Such detailed studies strength­en the already established objectives of the varietal improvement program.

The entomologists continued to ob­tain evidence to support the original finding that the gamma isomer of ben­zene hexachloride (lindane), used as a systemic insecticide, provides excel­lent control of the rice stem borers. During 1964, this chemical was applied to the entire experimental field of the Institute with the result that stem borer damage was reduced to less than 1 percent. National agencies in the Philippines and in other countries are being urged to try lindane on their ex­perimental and demonstration farms. This appears to be one of the truly significant contributions that science can make toward increasing rice yields in Southeast Asia, where such insects as the rice stem borers and the rice stem maggot are prevalent.

The Institute inaugurated in midyear a program to train a limited num­ber of rice production specialists and to assist Philippine government agen­cies in their program to help farmers adopt modern methods of rice produc­tion and thus increase rice yields. The Institute staff believes that not only must it concern itself with developing new knowledge and plant materials but it also should contribute toward the use of such knowledge and materials in agricultural development. 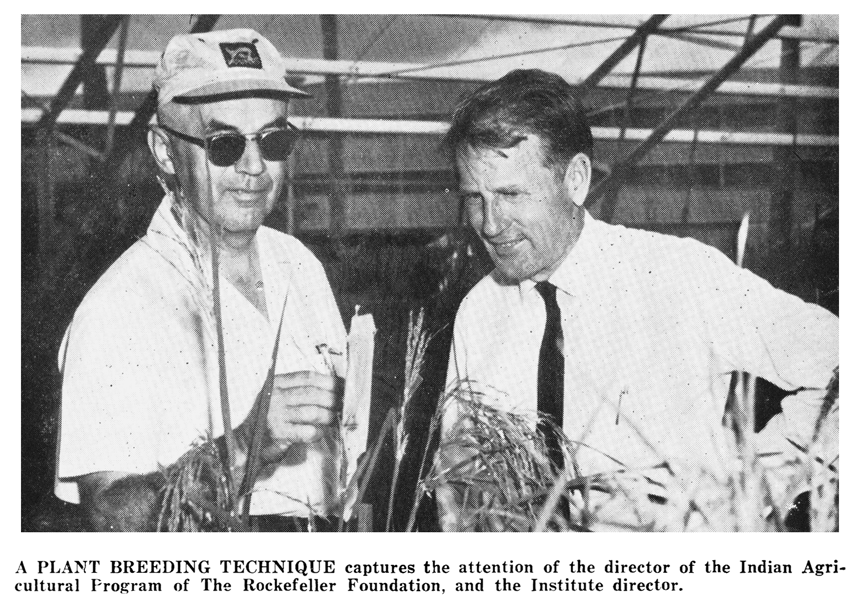 Only a few parts of the Institute’s program have been mentioned in the above paragraphs. The reader of this report will find much valuable informa­tion about nearly all phases of science related to rice production, including agricultural economics. The Institute does not knowingly omit any line of research that would contribute toward an increased production of high-quality rice. An integrated and coordinated program involving all such disciplines is essential for the fulfillment of its ob­jectives. At the same time one must recognize that in consideration of the practices already in use and the cost of changed practices that need to be in­troduced, one should expect to gain the earliest acceptance of those practices that are the most rewarding in terms of increased yield, and that are not too costly to apply.

The emphasis on a changed varietal type and on the use of systemic in­ insecticides is based on the fact that often more than a hundred percent increase in yield results from the introduction of either of these two factors into the rice cultivation systems now commonly used in Southeast Asia, and the costs in­ involved are slight in relation to the in­ creased returns.