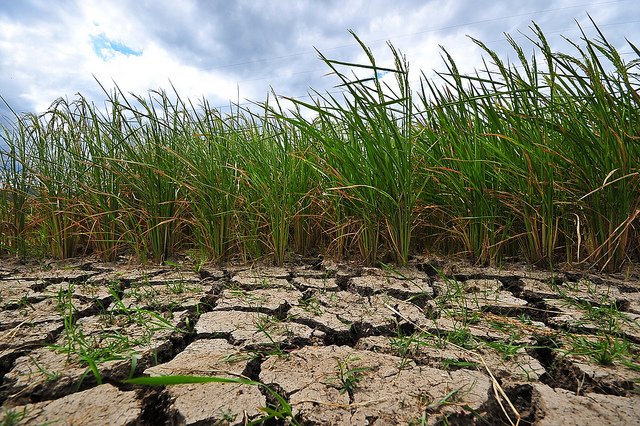 The world may be confronted with a global food crisis similar to the 2007-08 crisis as a result of the current El Niño episode. It is imperative that tight cooperation be secured among the biggest rice-producing and -consuming nations to stem or manage the crisis should such emerge.

This warning was released by the International Rice Research Institute (IRRI) in a press conference held yesterday at the institute’s headquarters south of Manila.

Drought from the current El Niño episode has resulted in lower harvests and irregular planting across several rice-producing countries. Combined with lower stocks in some key countries, emerging patterns in regional and global grain supply threaten the repeat of the painful rice price crisis in 2007-08 (see Are we headed for a repeat of the 2007-08 rice price crisis?).

Regional cooperation is crucial
The 2007-08 price crisis led the ASEAN to put together the ASEAN Integrated Food Security (AIFS) Framework and an accompanying strategic action plan. Beyond this framework and plan, however, much more needs to be done.

“Regional cooperation is essential to manage a food crisis,” said Matthew Morell, IRRI director general, in a communication he sent to the secretaries general of the ASEAN member countries last week, calling for joint action to forestall the impending crisis.

For maximum impact, cooperation would have to involve not only ASEAN member countries (Brunei Darussalam, Cambodia, Indonesia, Laos, Malaysia, Myanmar, the Philippines, Singapore, Thailand, and Vietnam) but also China, Japan, and South Korea (ASEAN+3) and India—among which are the world’s biggest producers and consumers of rice. Collectively, 90% of the world’s rice is produced in Asia.

IRRI is the resource for the region
IRRI sparked the Green Revolution in Asia, which saved the region from famine in the 1960s to the 70s, through its sturdy high-yielding rice varieties. More recently, climate-smart (i.e., tolerant of submergence, drought, salinity, and other environmental stresses) rice varieties have made unproductive areas in India and Bangladesh, as well as parts of Southeast Asia, bloom and are now being touted to have ushered in a second Green Revolution. (See A bigger rice bowl.)

Working with hundreds of partners across the world, IRRI has developed and offers its improved and resilient rice varieties, crop management technologies, and expertise to rice-growing countries. Upon request of the governments of some of these countries, IRRI had helped develop national rice sector strategies, providing policy advice and technical assistance.

“The way to handle another crisis is for the ASEAN+3 and India to come together as a region with shared concerns and interests, and take advantage of IRRI as a regional and neutral resource,” said Bruce Tolentino, deputy director general for communication and partnerships at IRRI.

IRRI’s call for action also includes an appeal for serious investment in rice research, which has borne the brunt of decreasing support in agriculture globally. Rice research has historically been supported mainly by Western donor countries, and to a much lesser degree by rice-growing countries. IRRI seeks to push this dynamic to a more appropriate balance, that is, for the biggest rice stakeholders to invest the most in the research.

The Philippines, eighth largest producer of rice in the world in 2015 and one of the most at-risk countries from climate change, has risen to the challenge and is now IRRI’s fourth biggest donor. Other Asian countries, such as Vietnam, Thailand, Taiwan, India, and Indonesia, are also now ramping up investment in rice research, and moving toward helping finance the science that benefits their own countries.

Ms. Barona-Cruz is a senior editor at IRRI.