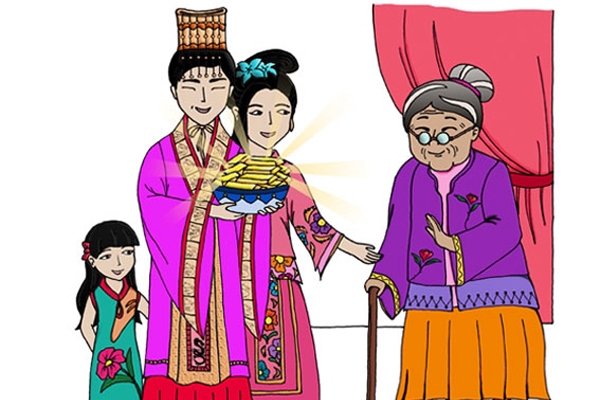 A long, long time ago, during the Qin Dynasty in China, there was a boy named Hán Xìn (Han-Shin). He was born in a very poor family and often had nothing to eat. He often went down to the river to fish, but rarely caught anything, so he was always hungry.

One day, a group of women were washing clothes in the river where Hán Xìn was fishing. An old woman saw that he was very thin and looked hungry so she came over to Hán Xìn and handed him a bowl of rice.

“You look hungry, little boy,” she said. “Please eat this bowl of rice.”

“Why do you promise so much when you have nothing?” she said. “I give you rice because I feel sorry that you don’t have anything to eat. I don’t expect you to repay to me. If you were a real man, you would find a way to support yourself.”

Hán Xìn felt ashamed. But he knew that the old woman was right, so he worked hard to seek his fortune.

When Hán Xìn grew up, he became brave and kind. He joined the rebel forces that eventually overthrew the emperor of the Qin Dynasty in 206 BC. He rose through the ranks and became an army general. In the end, he was conferred the titles of “King of Qi” in 203 BCE and “King of Chu” in the following year of the Han Dynasty. He did many good things and helped many people. He became rich and was well respected.

But, Hán Xìn never forgot the old woman who had given him rice when he was poor and hungry. He went back to the village and looked for her. At last, Hán Xìn found the old woman. He took her to his palace. Hán Xìn bowed down to the old woman and gave her a bowl filled with gold.

“I promised I would pay you back someday,” he said. “Please take the gold.”

The old woman was delighted with Hán Xìn’s gestures, but refused to take the gold.

“Thank you for the gold,” she said. “But you have already paid me back by becoming a strong and kind man.”

The story of Hán Xìn passed from generation to generation and it is still often used to remind us that even small acts of helpfulness are very valuable to those who really need them so we should help when we are able to do so. It also teaches us that we should not forget the kindness that people offer to us and that we must repay them.

Note: The Chinese idiom yī fàn qiān jīn (one rice, thousand gold) is derived from this rice fable. It is a reminder that we should do favors for others without expecting anything in return, and we should forever remember a favor from someone else.

Dr. Ye is a collaborative research scientist at the International Rice Research Institute (IRRI). He and his team are using modern technology to identify genes that will allow rice to tolerate heat and help farmers cope with global warming. As a boy, Dr. Ye grew up on a farm in Yunnan, China and rice was the most important crop for his family. However, with traditional varieties and farming techniques, the yield was very low. His family and many families in his hometown didn’t have enough rice to eat until the late 1980s, when he was already in high school. Later on, with new high-yielding rice varieties, especially hybrid rice, among other technologies, farmers were able to grow enough rice for their families. It’s easy for him to relate with the poor boy in the story and he reminds himself to be of help to the poor and society.

Ms. Malabanan is an intern at IRRI and communication arts student at Laguna University, Philippines.