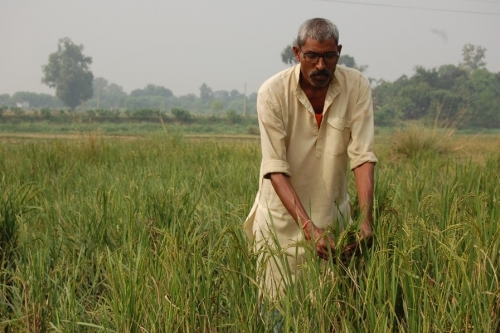 Ram Behal Maurya and his sons will be harvesting rice from a small piece of land he inherited from his father in one of the flashflood-prone areas in the eastern state of Uttar Pradesh in India, where crops can be completely wiped out from floods. (Photo: Mutya Frio)

A growing number of subsistence farmers as well as seed growers are now planting “climate-change-ready” rice in the rice bowl state of Uttar Pradesh and the speedy uptake is unprecedented. The improved varieties are capable of surviving even under harsh environments such as drought or floods that are predicted to get worse with climate change or in problematic soils with high salt content that may become more widespread as sea levels rise because of climate change. The climate-change-ready rice has been bred into local mega-varieties that are high-yielding and widely grown by farmers.

The International Rice Research Institute (IRRI), together with its partners, develops improved rice varieties that are tolerant of various environmental stresses, helping farmers curb yield losses, particularly those who farm on stress-prone farmlands.

Through IRRI’s research, plant breeders have identified a gene that confers tolerance of submergence and chromosomal regions that confer tolerance of drought and soil salinity. The result is a rice variety that is resilient to a particular environmental stress, is high-yielding, and retains other desirable qualities of the original variety, such as good grain quality and palatability.

Under the IRRI-led project Stress-Tolerant Rice for Poor Farmers in South Asia and Africa (STRASA), farmers now see the results in their own fields. Thousands more in India and parts of South Asia have been adopting stress-tolerant varieties at unprecedented rates. About 78 kilometers away from Mr. Maurya’s farm is Rampur Village, where Kamalawati Ramkeval is happy with her harvest. Both farmers suffer from annual harvest losses caused by incessant rains and flash floods. IRRI plant breeders found that the SUB1 gene confers tolerance of submergence. They bred the SUB1 gene into the mega-variety Swarna, a highy-yielding variety widely grown in Uttar Pradesh. In field trials, Swarna-Sub1 survived up to 14 days in floodwater and out-yielded flood-susceptible varieties by at least 1 ton per hectare. In 2009, Swarna-Sub1 was officially released for planting by the government of India.

Mr. Maurya and Ms. Ramkeval each planted the flood-proof Swarna-Sub1 in their respective fields during the kharif or monsoon season. Although his crop was under floodwater for 12 days, Mr. Maurya was able to harvest 2.5 tons per hectare of unmilled Swarna-Sub1, almost twice his harvest from variety Soankhar of past cropping seasons.

Although Soankhar has the ability to grow as water rises, it yields barely 1 ton per hectare. As for his latest harvest, Mr. Maurya intends to keep a small portion of Swarna-Sub1 seeds for planting next season and sell the remaining seeds to farmers in adjoining villages.

Ms. Ramkeval, on the other hand, was lucky as her field was not flooded this year. She harvested 6.5 tons per hectare of unmilled Swarna-Sub1. “I will save the harvest for my family,” she says. ”We work hard to grow it so we’d rather not sell it.” Like Mr. Maurya, she has seen a substantial increase in yields in her family’s rice fields and she plans to keep some of the seeds for the next monsoon.

Meanwhile, Meera Prabunath, also from Rampur Village, had a bountiful harvest but of a different rice variety. In the past, her less-than-a-hectare land was left to fallow because of drought. In 2010, Ms. Prabunath planted seeds of a drought-tolerant rice variety released in India as Sabhagi dhan. IRRI scientists developed this variety through conventional breeding but have now discovered the region of a chromosome, known as quantitative trait loci (QTLs), that contains genes believed to express drought tolerance. These QTLs will be used for breeding in the same way as the SUB1 gene to develop drought-tolerant rice varieties. Last season, Ms. Prabunath harvested 4.15 tons per hectare of Sabhagi dhan, transforming a formerly drought-prone land into a viable source of sustenance and income for her family.