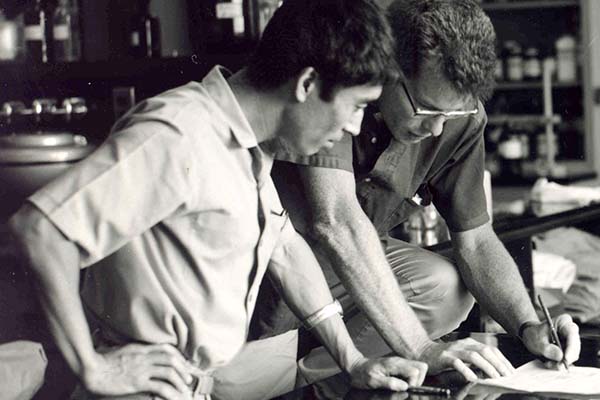 What country is a major salmon producer and exporter to Japan? The answer is Chile. And what country, also in the Southern Hemisphere, grows large amounts of soybeans? Brazil.

But, 40 or 50 years ago, Chile did not produce a single salmon and Brazil was not a major producer of soybeans. So, who started raising salmon in Chile and who started growing soybeans in Brazil’s cerrado, a vast savanna thought to be barren? The Japanese people and the Japan International Cooperation Agency (JICA) are the answer. These accomplishments, however, are less known in Japan and elsewhere. The World Bank often refers to Chile’s salmon and Brazil’s soybean production as success stories, but it shows no sign of recognizing Japan’s contributions.

Another question: Why is it that Thailand has become a major manufacturer of automobiles, to the point that it has been dubbed the “Detroit of the East”? What made this possible was guidance from the Japanese, including their companies in the auto industry. Another major hub of car manufacturing is the Pearl River Delta area of southern China. Also, this has input from Japan, namely, training of the personnel required by carmakers.

Japan can take pride that its official development assistance (ODA) played a key role in all of the above success stories. A case that I am quite familiar with is Asia’s Green Revolution.

As of the 1960s, food production in tropical Asia was increasing much slower than population. The room to expand cultivation areas was less and farm productivity was not improving significantly. It was feared that major food shortages would occur. But, this was averted by the development of new, higher-yielding rice varieties by the International Rice Research Institute (IRRI) in the Philippines. These varieties were supported by investment in irrigation.

Japanese researchers, such as physiologist Akira Tanaka, played a key role at IRRI as it set the stage for the start of the Green Revolution. From the 1970s to 2000, the yield per unit area of rice in tropical Asia approximately doubled, and total rice production roughly tripled. Thus, the warning of the danger of famine in Asia stopped. The Japanese government provided generous financial support for IRRI’s research and training of its personnel. Japan also joined the Asian Development Bank in supporting investment in irrigation. This is another example of Japan’s ODA producing a game-changing advance. Only a few people are aware of this.

Japanese development assistance has produced other major advances in Asia and elsewhere. But, the track record of Japan’s ODA is less known—even to people like me, a specialist in development economics. Although the details await further study, my assessment is that Japan’s aid program has contributed to industrial development in many countries through this combined focus on people and infrastructure.

The need for effective strategies

EXTENSION WORKERS from countries that are part of the JICAsupported Coalition for African Rice Development have attended 16-week training courses on rice farming at IRRI and other locations in the Philippines. They then returned to their home countries to pass on their new knowledge to farmers. (Photo: IRRI)

Japan’s ODA officers tend to think that the aid programs aim only to promote industrial development in developing countries through financial assistance. This view is not terribly wrong, but somewhat problematic.

At present, nowhere in the international community of aid donors can one find a consensus on the strategies that can promote development and reduce poverty in developing countries. Aid without a strategy is unlikely to produce successful outcomes. It is like kicking a ball blindly toward a goal. What is needed is to set effective strategies. This should be an important goal of ODA. Although Japan’s assistance has been effective, evidence-based results have not been collected yet. Therefore, Japan’s ODA has not been a source of examples for other donor countries to learn from.

People have been calling for the reduction of poverty for years, but the discussion of development strategies has failed to achieve much progress on this. The only points of consensus are that, (1) in order to reduce poverty, jobs for poor people must be created; and (2) to create such jobs, agriculture and manufacturing must be developed through new technologies.

The theme of the World Bank’s 2013 World Development Report was “jobs,” but the soon-to-be-published 2016 edition will focus on “the Internet and development.” The World Bank is presumably sketching a scenario in which IT innovation leads to industrial development, thus creating jobs and thereby reducing poverty. To make this happen, however, to have strategies to spark innovation is necessary.

The first priority should be human resource development. In manufacturing, this means training of executives. No amount of fine equipment and good infrastructure will help a company grow unless its chief executive knows about management and technology. Recent research has shown that executives in developing countries tend to lack management know-how and this is preventing their companies from developing. Advanced countries have stocks of superior technologies and knowledge about management. Executives in developing countries should tap into these intellectual resources.

My colleague Sonobe Tetsushi and I are currently working with JICA and the World Bank on a project in Africa—testing the effectiveness of kaizen, a Japanese management technique of pursuing continuous incremental improvement. So far, the results look good. Infrastructure improvements and loans produce more positive results after corporate management has become more efficient. This is particularly effective in supporting up-and-coming companies by constructing plants in industrial zones. This is our idea of a good development strategy for manufacturing.

This can also be applied to agriculture. The key, as well, is human resources, which means researchers and extension agents to spread new technologies. Farming technologies depend on climate and local conditions, so they cannot simply be imported from other countries. Applied research is needed to adjust advanced technologies from elsewhere to work under local conditions. Surprisingly, in rice growing, Asian technologies can be used in Africa without modification. So, a Green Revolution for rice in Africa is possible even without applied research.

In 2008, I was able to persuade JICA to organize an initiative called the Coalition for African Rice Development, which aimed to double rice production in Africa in 10 years. Unfortunately, funding was lacking to train extension agents, and it is not clear whether the initiative can double production by 2018. But, if the training of agents progresses, the new technologies will start to spread. So, investing in irrigation, as well as in transportation and communications, will make infrastructure for enhanced marketing more profitable. As with manufacturing, investment that is timed in this way is sure to result in higher productivity for agriculture. These are my ideas for a development strategy in the agricultural sector.

These strategies do not conflict basically with the thinking Japan has adopted up to now in its ODA. The next step is to improve the development strategies through joint efforts by JICA, private companies, and researchers, to test the effectiveness of these strategies, and to advertise them globally as useful development models. If this can be done, it will surely greatly enhance other countries’ assessments of Japan’s ODA.

Dr. Otsuka, former chair of IRRI’s board of trustees (2004-07), is a professor at the National Graduate Institute for Policy Studies in Tokyo, Japan.

Reprinted with permission from nippon.com.