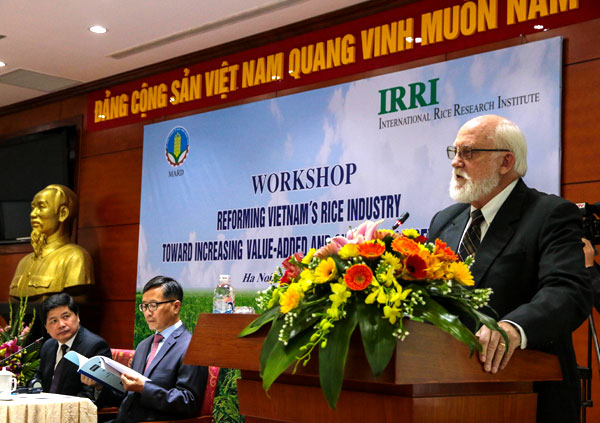 Hanoi—Vietnam’s Ministry of Agriculture and Rural Development (MARD) this week put its full weight behind a national strategy designed to make rice production an even larger engine of inclusive economic growth.

Together with the top leadership of the International Rice Research Institute (IRRI) and other public and private sector partners, MARD seeks the rapid and sustained growth of the agriculture sector, especially the rice subsector in which Vietnam is already a global leader. The rice industry serves as the foundation of Vietnam’s inclusive development success story.

This week’s collaborative effort advances, in the country’s rice sector, the June 2013 Vietnam government decision QD-889, or Approving the Project on Agricultural Restructuring Toward Raising Added Values and Sustainable Development. In response to this decision and to MARD priorities, IRRI has offered support to Vietnam-led rice sector improvement efforts in key areas.

On Thursday, 27 November, MARD Minister Cao Duc Phat and IRRI Director General Robert Zeigler will sign a host country agreement that will facilitate more robust international exchange among Vietnamese and IRRI scientists and experts who will refine and implement Vietnam’s rice sector strategy. This also makes IRRI the first international agricultural research center to be officially recognized as an international organization by the Government of Vietnam.

This week’s developments raise to a higher level the decades-long partnership between Vietnam and IRRI, which started in 1963 when the first Vietnamese scientist studied at the rice institute. A 2011 report from the Australian Centre for International Agricultural Research found that between 1985 and 2009, IRRI varieties and breeding lines contributed, on average, 50% of the annual yield increases in southern Vietnam and the use of new varieties increased Vietnamese rice farmers’ income by US$127 per hectare (in 2009 values) per year during the study period.

Since 1963, IRRI has enabled more than 100 Vietnamese scholars to gain advanced degrees in rice science. In addition, more than 700 Vietnamese rice specialists, of whom more than one-third are women, have received training in rice technologies at IRRI.