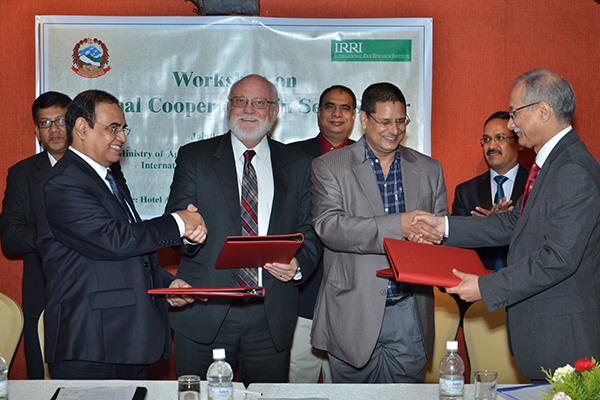 Rice farmers in India, Bangladesh, and Nepal will have faster access to newly developed high-yielding climate-smart varieties. This is thanks to a regional seed cooperation agreement that speeds up the release and dissemination of rice varieties to benefit farmers in the region.

Saves breeding time
The regional seed cooperation saves a lot of resources and the time required for a variety to be released in one country. The time it takes from initial evaluation of a breeding line to the release of a new variety could take between 3 to 6 years.

“With this seed cooperation agreement, a rice variety that has been tested, approved, and released in one country can be released in other countries without undergoing further testing and evaluation, as long as they will be grown in similar agroclimatic conditions,” says Abdelbagi Ismail, principal scientist at the International Rice Research Institute (IRRI). “The regional cooperation system is the most suitable platform for the three countries because they share similar agroecosystems and borders.”

How it all started
“IRRI played a catalytic role to make the regional cooperation happen,” says Dr. Ismail, who also leads the Stress-Tolerant Rice for Africa and South Asia (STRASA) project. “The Institute convened the senior officials of the three countries through a meeting under STRASA.”

Among other things, the two countries agreed to have a joint evaluation of improved rice varieties for release in areas with similar agroclimatic conditions in both countries. Part of that agreement provided for reciprocal acceptance of research data, including results of farmers’ participatory varietal selection activities that are generated in one country to support varietal release in the other country.

And, consistent with the goal of bringing the needed climate-change-ready varieties to farmers in the shortest time possible, the two countries agreed on the promotion of prerelease multiplication and demonstration of breeding lines and varieties at advanced stages of release to fast-track awareness among farmers and to ensure a sufficient supply of breeder seed once a variety was released. In relation to this, the two countries agreed to work together in formulating seed protocols and guidelines that are compatible across countries.

On 18 October 2014, Nepal joined with the governments of Bangladesh and India to sign a protocol on regional seed cooperation in a workshop on seed issues held in Kathmandu, Nepal.

A historic moment
This regional cooperation on rice varieties among the three countries was declared historically significant by the agriculture executives.

Dr. S.M. Nazmul Islam, agriculture secretary of Bangladesh, believes that signing of this regional agreement ushers in a new era of collaboration and cooperation that aims to help improve the livelihood of the poor farmers in the region.

Nepal’s agriculture secretary, Jaya Mukunda Khanal, shares the same view. “The cooperation has opportunities and options to improve the livelihood of poor farmers in the region,” he says. “It will provide a platform to share good practices among countries and the exchange of technologies and quality seed can help attain higher rice productivity in the region.”

Mr. Bahuguna notes that, although the agreement covers only rice, it can be extended to other crops later on. “This cooperation is not limited to the seed sector and will lead to agricultural development in the region,” Mr. Bahuguna adds. For him, this cooperation can be expanded and replicated to other parts of the world. “The South Asian Association for Regional Cooperation can play a vital role in bringing in more countries to the platform.”

Results to boot
The regional cooperation, even in its infant stage, has produced concrete results and has demonstrated what can be achieved. In fact, several varieties released in one country are already popular in another. “For example, BR11, BRRI dhan 28, and BRRI dhan 29, which are modern high-yielding rice varieties released in Bangladesh, are now widely grown in eas
tern India,” reports Mr. Bahuguna.

Indian varieties are now estimated to be planted on more than 21% of the rice area in Bangladesh. Some Indian rice varieties, such as Swarna, Sarju 52, and Samba Mahsuri, are now popular in Nepal.

As the initial implementation step of this agreement by India, several varieties released in Bangladesh, such as BINA dhan 8, 10, 11, and 12, are recently notified for release in the Indian states of West Bengal, Assam, and Odisha. These varieties will be evaluated for release in other states also, but only for a year—as provided in the agreement.

Sukha dhan 5 and 6, drought-tolerant varieties released in Nepal, are being considered for release in Uttar Pradesh and Bihar.

The Indian government has been proactive in carrying out the regional cooperation agreement. In fact, starting in 2015, the Department of Agriculture of India allotted 30% of its funds to programs such as the National Food Security Mission and Bringing Green Revolution in Eastern India to further promote climate-smart rice developed by STRASA.

According to Dr. Ismail, the regional seed cooperation was carried out smoothly not only because these three countries share similar guidelines for varietal evaluation and release, but because each country shares a similar goal—that is, delivering the technologies needed by farmers.

Indeed, the success of the creation and the implementation of this regional seed cooperation clearly demonstrate that partnerships and collaboration can accomplish the goals very rapidly. It is hoped that, with IRRI’s catalytic role and being a lead institute of the Global Rice Science Partnership, more milestones can be achieved among the partners. In the future, this kind of regional cooperation could help partners use resources efficiently as countries share relevant information with one another.

Ms. Reyes is the managing editor of Rice Today.