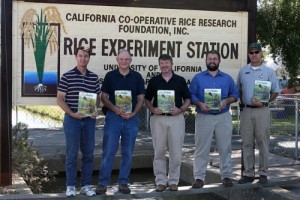 The successive articles Rice in the Golden State, California  breeding, All in it together and On their toes feature the diverse regulatory, research, political,and economic needs of the California rice industry, as the authors all aim to give a glimpse of rice in California.

The first successful plantings of California rice occurred a century ago, some 60 miles (96 km) north of Sacramento. Recognizing the clear need for research, the Sacramento Valley Grain Association, United States Department of Agriculture (USDA), and the University of California (UC) established the Rice Experiment Station (RES) near Biggs in 1912.

This visionary concept of bringing growers, researchers, and other rice industry players together to address and support California’s rice production continues to be a successful model. In 1969, it was used to set up the California Rice Research Board that funds the RES Rice Breeding Program and UC Rice Research Projects. Likewise, the founding of the California Rice Commission in 1999 made use of funding from rice farmers and milling and marketing organizations.

The California Cooperative Rice Research Foundation (CCRRF) is a grower-funded, private, nonprofit research foundation that owns and operates RES. The 478-acre (191 hectares) RES facility supports breeding and genetics research, agronomic research, and seed production. Since its inception, the RES has provided many improved varieties that have benefited the California rice industry.

From 1918 to the 1950s, California primarily grew only two tall, japonica short-grain varieties, Caloro and Colusa. Both were originally from Japan and China. In 1947, RES produced the medium-grain Calrose—a product of a backcrossing program for Caloro. After its release, Calrose became the main variety grown throughout the 1970s.

RES initiated a grower-funded accelerated breeding program in 1969. It hired three rice breeders and expanded the program. In one of its projects, RES incorporated the semi dwarf trait into Calrose. Then, it added the earlier maturity trait by cross-breeding the variety with induced mutants and a tropical indica variety (IR8). Large-scale crossing, effective selection screening, and yield testing proved to be very effective in coming up with new and better varieties. In fact, the recently developed medium grains have significantly improved yield, kernel size, and whole-kernel milling yield.

So, by 1992, more than 95% of California’s rice area was planted with improved semidwarf rice. Average yields rose to 3.6 tons per acre (9 tons per hectare). Together with improved short and long grains, the program also released varieties considered as “specialty market types.”

The RES Breeding Program continues to improve varieties. During the Rice Field Day held in September 2009, Dr. Jacob Lage reported that, under the medium-grain project, the stability of milling yield has been recovered in some very early maturing varieties of the Calrose line. They are now in advanced testing and seed increase stage. Dr. Jodari, the long-grain project leader, expressed his enthusiasm about the cooking quality of the conventional varieties and several specialty-type long-grain varieties that are being developed. Dr. Virgilio Andaya, on the other hand, shared his work that uses marker-assisted selection as a new tool for his premium-quality short-grain breeding project. Moreover, the annual event also showcased RES’s improved facilities, namely, the new DNA marker laboratory, greenhouses, and the enhanced cold-tolerance screening facilities. Funding used for these capital improvements came from donations made by various rice industry players to support California’s rice research.

Dr. McKenzie is the director of the California Rice Experiment Station. He is also a plant breeder at RES.