The rice varietal cafeteria provides a space where farmers and other stakeholders interact, discuss, give feedback, learn, and decide on their varietal preferences and choices. 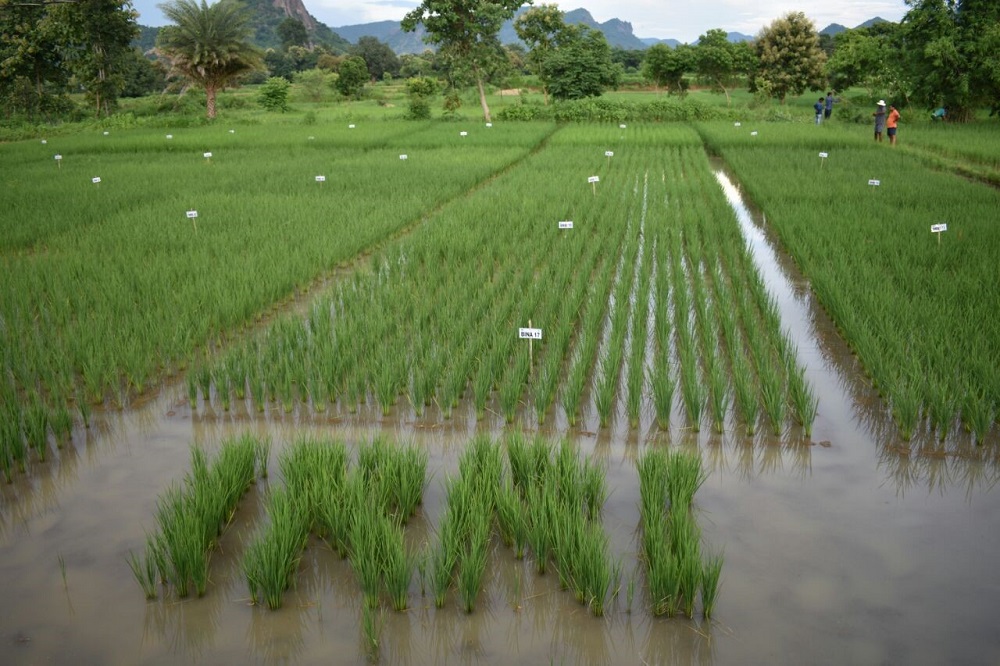 .
Traditional crop varietal cafeterias (or crop cafeterias) facilitate the scientific evaluation and selection processes of new varieties by farmers. The concept was promoted across India by the agricultural extension center Krishi Vigyan Kendra (“farm science center).”  These are generally conducted on government land or farmers’ fields where the farmers and stakeholders themselves can compare and select one or more suitable varieties that have been identified as suitable for growing on their land.

Crop cafeterias replicate researcher-designed trials but can be managed by the farmers themselves with training and orientation. The farmers can follow the normal crop establishment and management practices in their locality but are also encouraged to avoid protecting the varieties against prevailing harsh environmental conditions and pest and diseases to highlight their hardiness over locally grown varieties.  Aside from environmental stress tolerance and pest and disease resistance, the farmers also get to choose varieties based on agro-morphological traits and yield and quality characteristics. 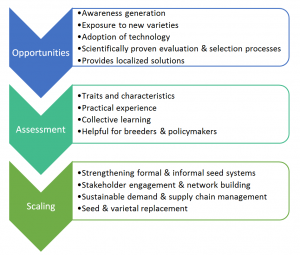 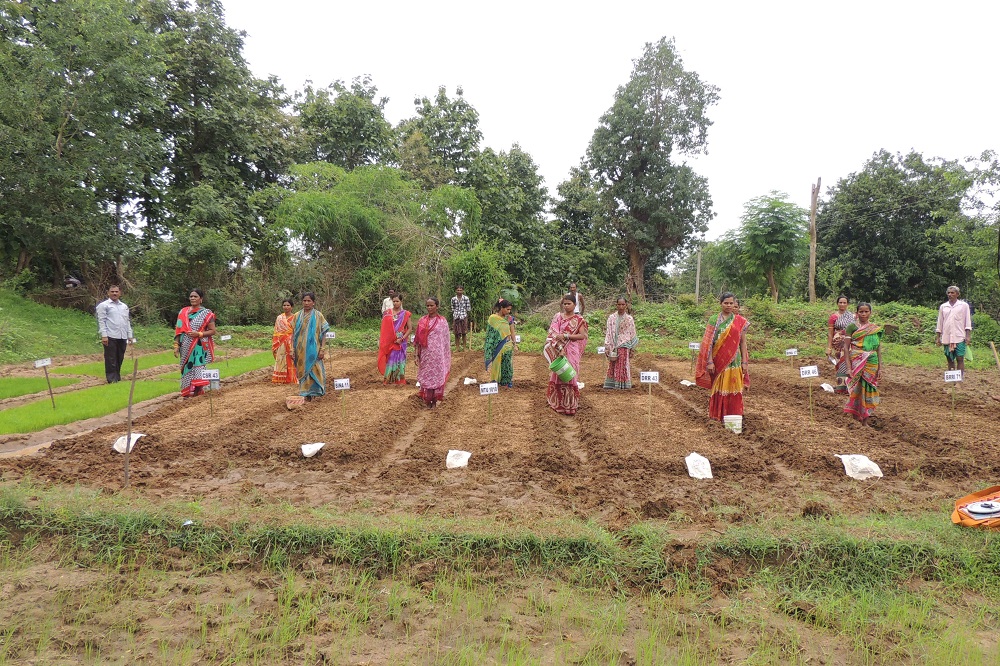 “The evidence hub has given us a platform for learning about making observations, comparisons, and witnessing the results so we can make the right decisions,” said Mrs. Hemlata Sabar, the secretary of the Maa Thakurani. (Photo by P.K. Sethi, IRRI-India)

.
In kharif 2018, IRRI organized two client-based rice varietal cafeterias in Odisha with the women self-help group Maa Thakurani and the Reliance Foundation, an organization that aims to improve the lives of marginalized sections of society

Maa Thakurani organized their first crop cafeteria at their farm field in Bhawanipatna Block in Kalahandi District in kharif 2017. Learning from this, the women’s group organized a succeeding crop cafeteria in 2018 with minimum support from IRRI. The members cultivated 16 stress-tolerant rice varieties along with local varieties using similar management practices. 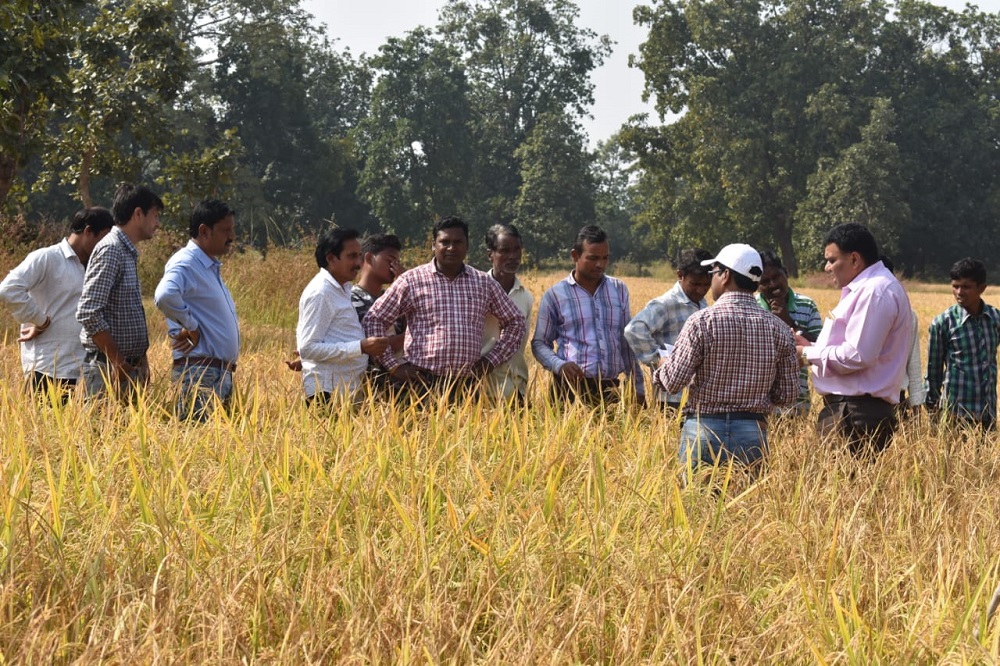 “Varietal evaluation and selection through collective participation is an innovative approach led by IRRI. It gives participating farmers an opportunity to observe evidence-based facts and take decisions on the most suitable varietal selection for the ecology. The adoption of potential varieties can ensure the improved yield and income,” said Mr. B.G. Mahesh, Food and Nutrition Security program integrator at Rural Transformation. (Photo by Dilip Kumar Rout, IRRI India)

In Deogaon Block in Bolangir District, the Reliance Foundation, in coordination with IRRI, conducted a rice varietal cafeteria in kharif 2018 to promote climate-resilient rice varieties and improved agricultural technology to improve rice farmers’ livelihood. Altogether 18 varieties were grown in a farmer’s plot in Bolangir. Following the guidelines established by IRRI, the Reliance Foundation promoted IRRI technology and innovations among the farmers. 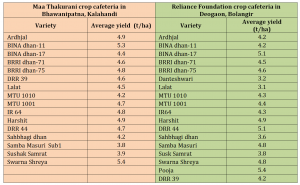 A systematic way of judging new rice varieties
A field day was organized at both client-based rice varietal cafeterias for the seed chain stakeholders, including the Deputy Director for Agriculture, other agriculture department officials, scientists, seed growers, dealers, and farmers to observe and evaluate the performance of the stress-tolerant rice varieties.  Each variety was rated based on stress-tolerance (when stress is present), crop height, tillering ability, duration, grain type, yield, and incidence of diseases and pests using a 10-point scale. These attributes are usually considered important for choosing a best-suited variety over others..

BINA dhan-17, BINA dhan-11, DRR 44, Swarna Shreya, and Sabour Harshit were given high ratings based on their phenotypic ranking and yield (See Table 1). Farmers in the region were delighted to see the performance of the stress-tolerant rice varieties and would like to cultivate the said varieties along with other potential varieties in the next season.

Beyond varietal selection
The findings show that the client-based rice varietal cafeteria is an effective method for disseminating high-yielding varieties and improved technologies by creating awareness among rice farmers. It was found to be very persuasive in changing the attitude, skills, and knowledge of farming communities.

But the benefits go beyond that. The multidimensional approach of the rice varietal cafeteria gives the opportunities for participatory learning and network building where various stakeholders interact, discuss, give feedback, and decide on their varietal preferences and choices. It also helps establish linkages between formal and informal seed systems as well as private and public seed sectors. It stabilizes seed supply chain management by creating and managing varietal demand and supply.

In addition, the evidence-based trait preferences from these hubs can provide breeders and other researchers with very helpful information for varietal development or improvement programs. These evaluation findings provide future directions about the rice varietal preferences and seed production for different ecologies and can help breeders design customized product profiles. This can further speed up the adoption of improved rice varieties. By adopting the most suitable varieties based on the ecological requirement, rice farmers also stand to gain higher yields and income. Rice varietal cafeteria findings also provide insightful guidance for policymakers to advocate for seed and varietal replacement.

Therefore, extension agencies and agriculture departments need to play a proactive role in providing technical support to crop varietal cafeterias and incorporate this method in their mainstream outreach programs to improve food production in the state.