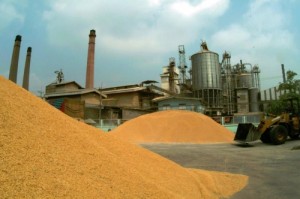 Many of Thailand’s 3.7 million rice farmers are unhappy. As the producers of the world’s biggest rice export crop, they believe their share of the 2008 rice price bonanza should have been a lot bigger. They now see the high prices slipping away before they can taste the sweetness of new wealth.

Early in June, they threatened to rally in Bangkok if the government didn’t make some effort to halt the slide of rice prices from their peak in May, back toward “normalcy.”

What the Royal Thai government has done to prop up the high prices is now a controversial part of the political turmoil that grips the country and that tangles all aspects of Thai life in a soap opera of intrigue, suspicion, and accusation.

World rice prices, which began to skyrocket in late 2007, were spurred by high demand and a decision by some exporting countries to opt out of the world market for the sake of their domestic food security.

A distinct minority of Thai rice farmers—those who would normally be regarded as wealthy; they cultivate irrigated land and produce as many as five crops in two years—struck it rich. Others have been able to meet their debts this year, while many poorer Thai farmers in the rainfed (non-irrigated) environment have yet to see any benefit at all. Rice millers and any exporters who were not badly burned in the explosive market of early 2008 (see Troubling on pages 13-17 of Rice Today  Vol. 7, No. 2) are believed to have been the main beneficiaries.

For most farmers, who are able to grow only one crop per year, the near-record prices of April and May came between crops, when they had nothing to sell. Their dismay grew as they watched the high prices dwindle before they could harvest again.

At its peak in early-to-mid-May, the price for 5% white rice (an export grade comprising maximum 5% broken grains) was US$1,022 per ton, and that for the premium grade of Thailand’s legendary Khao Hom Mali (Jasmine rice) was $1,245 per ton. Those exporters and millers with the good fortune to have stocks on hand and the foresight to resist the urge to sell forward did very well. Others, learning from their early mistakes, recovered to reap rewards.

Thailand’s gross domestic product rose by about 6% in the first half of the year, most of it coming from increased world prices for agricultural products, particularly rice. In that time, the value of the country’s exports leaped by about 30% compared with the corresponding period in 2007.

But, in the middle of May, prices began to fall again. Vietnam resumed exporting, India looked set to return to the global market, and importers stood back, waiting for cheaper deals. In early September, 5% white rice was selling for $760 per ton and Hom Mali 100% grade A for $913.

The small part of the brief bonanza that made its way down to the average farmer lost most of its gloss for two big reasons: increased production costs and chronic indebtedness.

The Thai Farmers’ Association says the cost of producing 1 hectare of rice in 2004 was $695. In 2006, this rose to $871, in 2007 to $1,019, and in 2008 to $1,296. Thailand imports all but a tiny fraction of the raw material for its fertilizer, and the cost has risen nearly 2.5 times in the past 4 years. Pesticide costs and seed prices have both doubled, and fuel costs for machinery have soared. The cost of renting land has also skyrocketed, affecting about one-quarter of rice farmers across the country.

About 80% of Thailand’s rice farmers carry an amount of debt variously described as relatively high to alarming. Their debt rises and falls in a constant rhythm, following the crop cycle—leaping with land preparation and planting, falling and occasionally disappearing with harvest.

According to some economists, the amount of debt is a direct consequence of government policy.

In 2001, the government of deposed prime minister Thaksin Shinawatra introduced a debt moratorium for farmers, allowing clients of the government-run Bank for Agriculture and Agricultural Cooperatives (BAAC) to defer their debts up to a maximum of Bt100,000 ($2,972) for 3 years, without any interest payments.

The 2008 government of Samak Sundaravej, after just a few months in office, reintroduced the same scheme, giving farmers another 3-year debt holiday.

At the same time, as many as 95% of Thailand’s farmers—excluding only the very poor—have access to a wide variety of easy credit sources, from commercial and state-owned banks through to the undisciplined use of government money in local village funds. Relatively poor farmers now have a higher debt-to-income ratio than their wealthier counterparts.

While some farmers were lucky to get enough from the high prices to clear their debts, the rush of rice income into the country captured the attention of Thailand’s politicians. Two of the country’s most respected economists say the industry has been perceived as the perfect vehicle for unscrupulous politicians to direct funds either into their own pockets or into their support systems in the countryside. As a consequence, the president of the Thailand Development Research Institute and former dean of economics at Thammasat University, Nipon Poapongsakorn, and the head of the Department of Agricultural and Resource Economics in Kasetsart University’s economics faculty, Somporn Isvilanonda, fear irrevocable damage to the domestic rice market and Thailand’s eventual decline as the world’s leading rice exporter.

Their concerns were exacerbated by a flurry of government activity in early June. The prime minister announced the reintroduction of price intervention for the secondary dry-season crop, supposedly to assist farmers. Then, he accused Commerce Ministry officials of collaborating with exporters at the expense of farmers, and removed all responsibility for rice matters from the Commerce Ministry and vested it in his own department, with assistance from the Finance Ministry.

Prime Minister Samak then formed three new committees, one each for the price intervention program, milling, and release. The new structure was additional to the National Rice Committee, which in its role as the formulator of rice industry policy, is routinely chaired by the prime minister and attended by the ministers of commerce, finance, and agriculture, as well as their departmental heads and other senior officials.

Then, as the export price for 5% white rice fell to about $856 per ton, and under intense pressure from farmers, the government announced its above-market-value intervention prices for the 3-month period between 15 June and 15 September. It pledged $405 per ton for white rice paddy (unmilled rice) with moisture content up to 15%. The price was progressively lower for higher moisture content, paying $361 to $376 per ton for paddy with a moisture content of 25%.

Putting this in perspective, the paddy sold by farmers for $376 per ton, with a moisture content of 25%, would increase in value to about $434 after being dried by millers to reduce its moisture content to 15%. After the paddy was milled into 5% white rice it would then cost exporters about $781 per ton.

Dr. Nipon and Associate Professor Somporn say the claim that price intervention will help poor farmers is a myth. They find support from the Thai Farmers’ Association, which says that most farmers are incapable of delivering rice with a moisture content low enough to qualify for the top government prices.

In a recent paper,1 the economists cited the Commerce Ministry’s Department of Internal Trade as estimating the financial loss from rice market price intervention in 2005- 06 at $314 million. The program handled a record 8.65 million tons of paddy in that season. As of December 2007, the government still owed the BAAC $1.783 billion for funding price intervention schemes between 2001-02 and 2005-06.

Moreover, the economists drew on figures from the Public Warehouse Organization, the Office of Agricultural Economics, and Thailand’s National Statistical Office to show that the lion’s share of benefits from price intervention went to the richest strata of Thai farmers. Using figures from the 2006-07 harvest season, when the price intervention scheme cost $703 million, Thailand’s farmers were divided into 10 equally-sized groups ranging from poorest to richest. The bottom four groups received less than 18% of the benefits, while the top four received more than 62%.