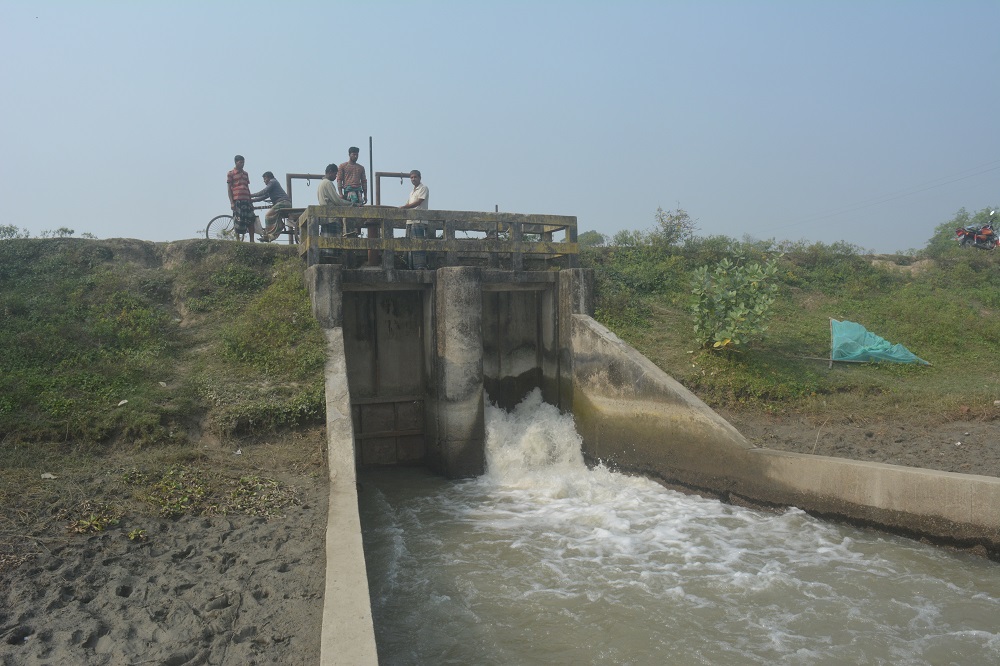 Community coordination to manage sluice gates is an important factor for the intensification of polders. (Photo: IRRI)

Sustained economic growth, the quality of life, and the social stability of a rapidly growing Bangladesh depend largely on food security. Chronic or even sporadic food shortages could derail Bangladesh’s impressive economic growth of the last few decades. Although Bangladesh as a whole is currently self-sufficient in rice production, the country faces immense challenges to sustaining its self-sufficiency status.

To maintain food self-sufficiency for its growing population, little scope exists to further increase cropping system intensity, except in the underused coastal zone lands. The coastal zone of Bangladesh comprises low-lying lands within a dense network of large rivers and their tributaries. The rivers are tidal and this effect extends about 150 km inland, with diurnal water level fluctuations of 2 to 3 meters. These river water resources are vital for crop production, ecosystem sustenance, and livelihoods of the coastal zone.

A low-productivity zone
Out of the 2.9 million hectares (ha) of coastal and offshore lands, about 1.2 million ha of agricultural lands were enclosed in 139 polders in the 1960s and 1970s to reduce the loss of life, prevent inundation and saline-water intrusion, and enable the production of aman (monsoon season) rice. Inside the polders are also dense, natural drainage networks (khals or canals), and some of the larger internal canals are connected to the surrounding rivers by sluice gates installed in the polder embankments.

Tens of millions of dollars have been invested in developing and maintaining the polders and the availability of appropriate improved agricultural technologies has greatly benefited other parts of Bangladesh. However, the productivity of the coastal zone remains low and it is still home to the world’s poorest, most food-insecure, and most vulnerable rural people. Unlike the rest of the country, the farmers in the polders have not widely adopted modern high-yielding rice varieties (HYVs) because their shorter stature makes them unsuitable for the high water depths (20−70 cm) that often prevail from July to December. And, because of delayed drainage at the end of the monsoon, the soil remains too wet and the farmers have to plant the dry-season (rabi) crops late. As a result, these crops greatly risk damage or complete loss by pre-monsoon rains and cyclones in May, with severe losses in the past five years.

Many researchers have reported the feasibility of increasing productivity in the polders by intensifying and diversifying cropping systems. However, despite considerable investment and efforts from government, nongovernment, and international organizations, adoption of improved production systems in the polders of the coastal zone of Bangladesh has been low. The main reason was that the key determinant, hydrology of the coastal zone, was not considered for its upscaling process or pathways.

This can be easily achieved by systematic operation of sluice gates synchronized with the tidal phenomenon in the river systems, together with the creation of hydrologically defined community water management units (by constructing small farm levees/drains to separate lands of different elevation) and synchronized cropping involving the community. 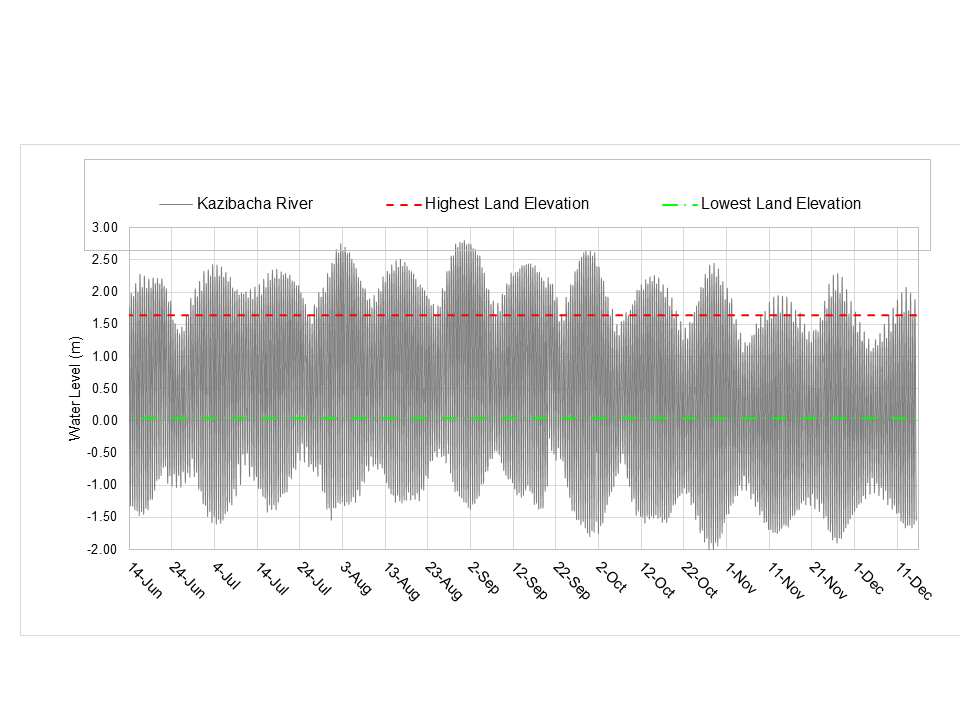 Variation in tide level in the Kazibacha River against mean sea level during the wet season.

The elevation of the agricultural lands in polder 30 varied from +0.04 m to +1.64 m and that of the water levels of the peripheral rivers of the polder during low tides varied from −2.1 m to −0.1 m, that is, below mean sea level (see figure above). On the other hand, the highest river water elevation (+3.0 m during high tide) remains much higher than the highest land elevation (+1.64 m) of the polder, indicating potential gravity irrigation opportunities (in case of prolonged drought) on polder lands during high tides.

An excellent opportunity for food security
Therefore, polder ecosystems provide an excellent opportunity to greatly reduce waterlogging and to irrigate rice by gravity at minimal cost in the monsoon season. An integrated crop and water management study in a 20-ha water management unit in polder 30 of southwest Bangladesh showed that the farmers were able to adopt HYV rice−HYV sunflower/maize cropping patterns through appropriate operation of the sluice gate for irrigating and draining out water in synchronization with the growth stages of aman rice. The farmers harvested HYV rice (5.1 t/ha) at least a month earlier with about a 2 t/ha higher yield than traditional rice (3.4 t/ha). The higher rice yield contributed to their food security and employment generation for the landless (lean-season employment).

Since the cropping intensity and productivity in other parts of Bangladesh are already high, the underused agricultural lands of the coastal zone may well be the only region where significant gains in food production can be made through intelligent management of the land and water resources in the polders to meet future challenges to the food security of Bangladesh.