The 2007-08 rice price spike seems like a distant dream now considering the calmness in the rice market in the past few years despite El Niño and other weather-related scares. 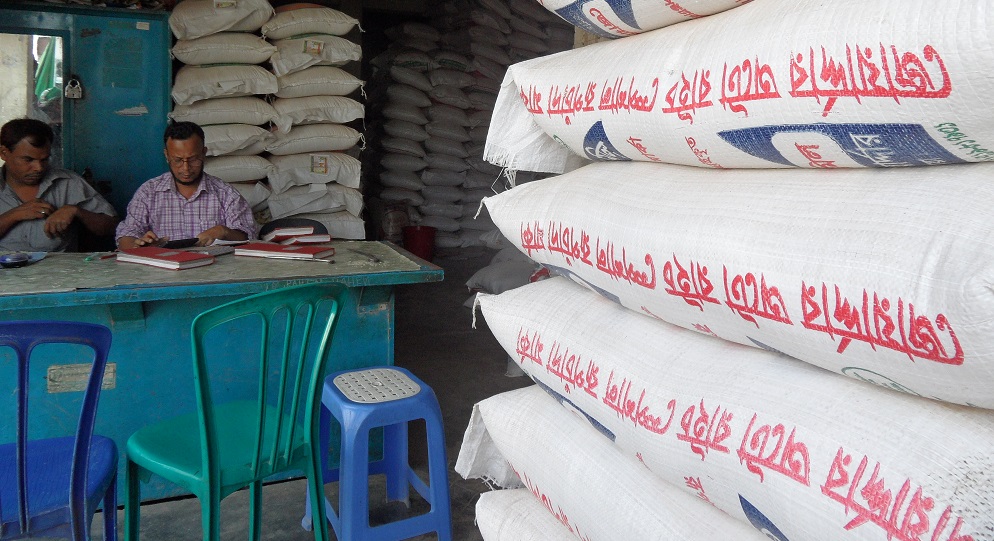 The 2007-08 rice price spike seems like a distant dream now considering the calmness in the rice market in the past few years despite El Niño and other weather-related scares. Rice prices in the international market have been very stable after a steep decline in 2013 (Fig. 1). The record production in 2016-17, which is expected to reach 480 million tons (milled rice equivalent) as compared with 472 million tons last year has kept the prices stable (Fig. 2).

The normal monsoon in many Asian rice-growing countries contributed to this bumper crop. As shown in Fig. 2, this is the sixth record crop in the past seven years. The leftover rice stocks in Thailand to the tune of 18 million tons from the rice mortgage scheme that was abandoned in 2014 have also kept the market stable in the past few years. According to a published report, the government plans to sell the last batch of 8 million tons of mortgage stock this year. Of the 8 million tons of stocks, 3 million tons have been reported to be food grade whereas the rest are for industrial use. 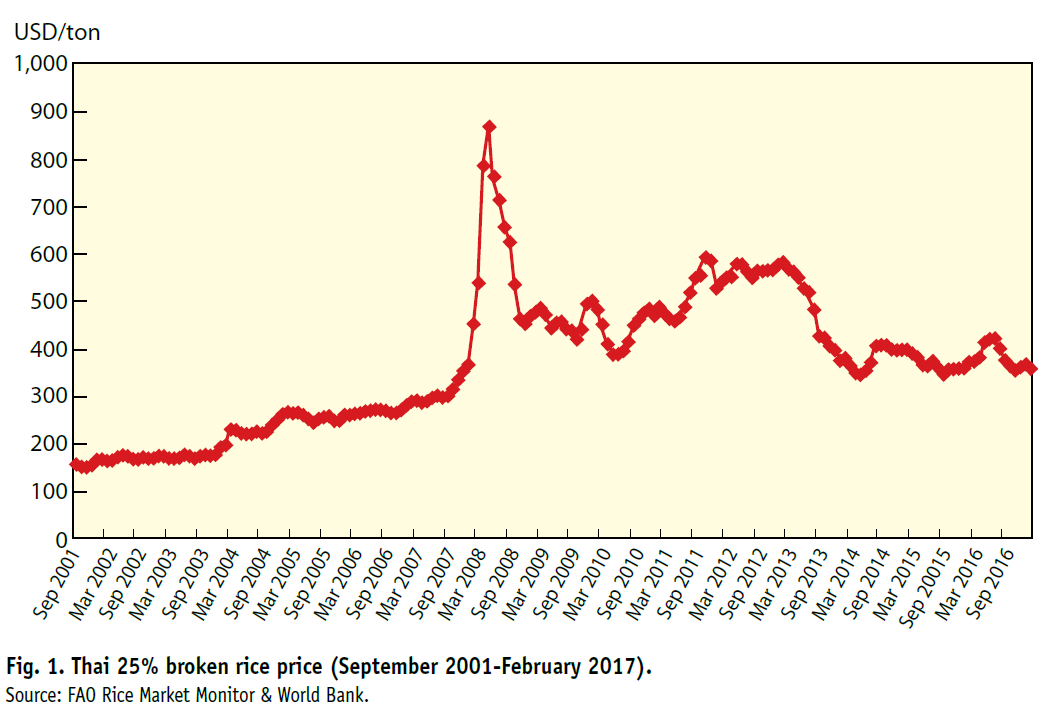 This will also be the sixth year in a row in which India will be exporting 10 million tons or more of rice since removing the export ban on nonbasmati rice in 2011. India’s entry into nonbasmati market coincided with the Thai mortgage scheme, neutralizing the unilateral action of Thailand to increase rice prices through its mortgage scheme. Thailand was unable to sell rice in the market and ended up stockpiling mortgage stocks. These mortgage stocks, in turn, helped keep the market stable during El Niño years. Both India and Thailand have helped this market to remain calm even in time of uncertainties. It is also sheer coincidence that, in the same year, India took everyone by surprise by taking the top spot in the export market, and China stormed into the rice market as the second-largest importer with 2.9 million tons of imports. Since then, China has overtaken Nigeria as the largest importer with imports reaching 5 million tons in 2016-17. This does not even include an additional couple of million tons of rice that enters China through cross-border trade from Vietnam and Myanmar. Other major Asian importers such as Indonesia, the Philippines, and Malaysia continue to import 3 to 5 million tons of rice together depending on their domestic production.

Outside Asia, many sub-Sahara African (SSA) countries continue to remain the biggest clients for Asian rice. In the past two decades, SSA rice imports have increased nearly three times from 4 million tons in 1997 to 11.6 million tons in 2017. This has happened despite the more than doubling of domestic production from 6.7 to 15.5 million tons during the same period. Both India and Thailand account for the bulk of SSA rice imports from Asia. 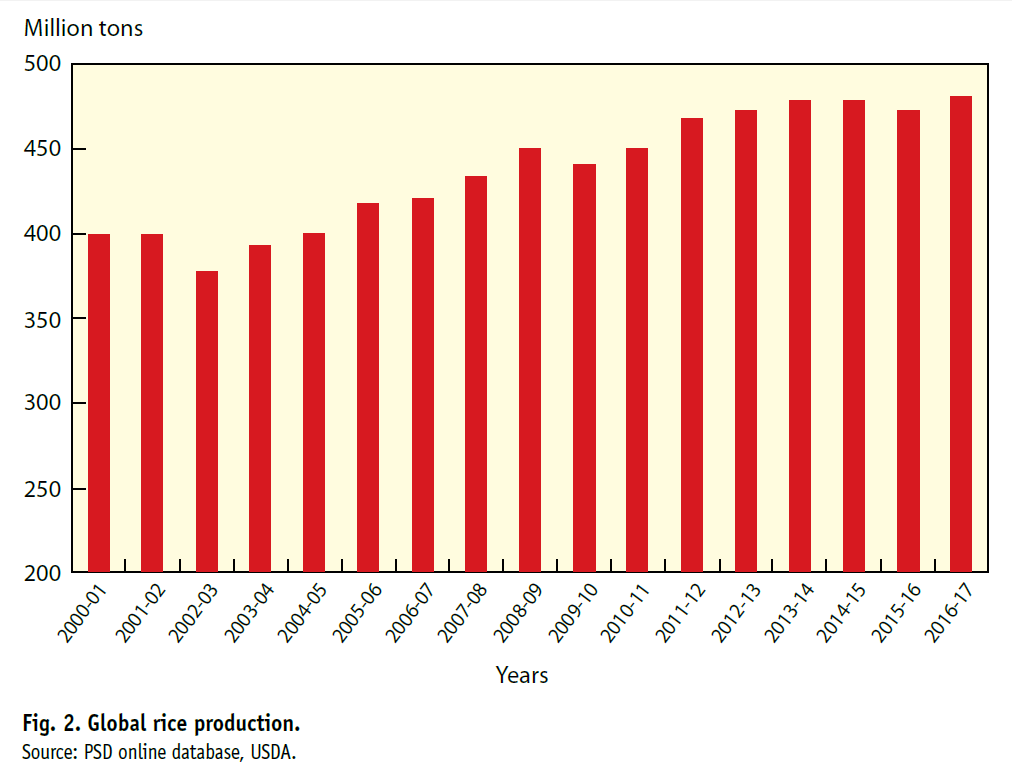 The overall upward trend of the volume of the global rice trade that was set in motion in the early 1990s continues to stay on track even after a change in sentiment of the importing countries during the post-2008 crisis to pursue self-sufficiency and reduce reliance on foreign rice. The current trade volume now accounts for nearly 9% of global production as compared with less than 7% during the 2008 rice crisis and 3.5% in 1990.

What does this mean for now and the future?
The record production in the past several years has kept a lid on the price but the rice stocks of the top five exporters (India, Thailand, Vietnam, Pakistan, and the United States) have steadily declined in these record production years from 41 million tons in 2012-13 to 28 million tons in 2016-17 in the face of strong demand growth (Fig. 3). In the past decade, rice consumption has increased by nearly 14% from 418.5 million tons in 2006-07 to 475.5 million tons in 2016-17. In terms of inventory as a proportion of total demand (the stock-to-use ratio), a convenient measure of supply and demand interrelationships, the ratio has declined from 30% to 20% during this period. But the good news is that this is still 5% greater than what it was during the rice crisis in 2007.

As we move into the main rice-growing season in 2017, the low stock-to-use ratio, which acts as a buffer against any weather-induced supply uncertainties, is likely to be in the mind of market makers. If the monsoon is disrupted in a few rice-growing countries, the market should be able to absorb these shocks and remain stable. But, large-scale disruption in supply due to extreme weather events such as flood and drought could create anxiety in the market. It is also important to note that without Thai rice mortgage stocks, which supported the market in the past few years, there will be added pressure on price if monsoon falters in key rice-growing countries. Looking into the future, the uptrend in rice trade is likely to continue despite some protectionism feeling among importing countries after the rice crisis. But, rising popularity of rice in many non-Asian countries, including Sub- Saharan Africa and the Middle East is likely to support the uptrend in rice trade in the future. Both India and China are also likely to play key roles, although on different sides of the global rice market. Ideally, one would like to see the global rice market to grow to 15–20% of total production for market stability and future food security. 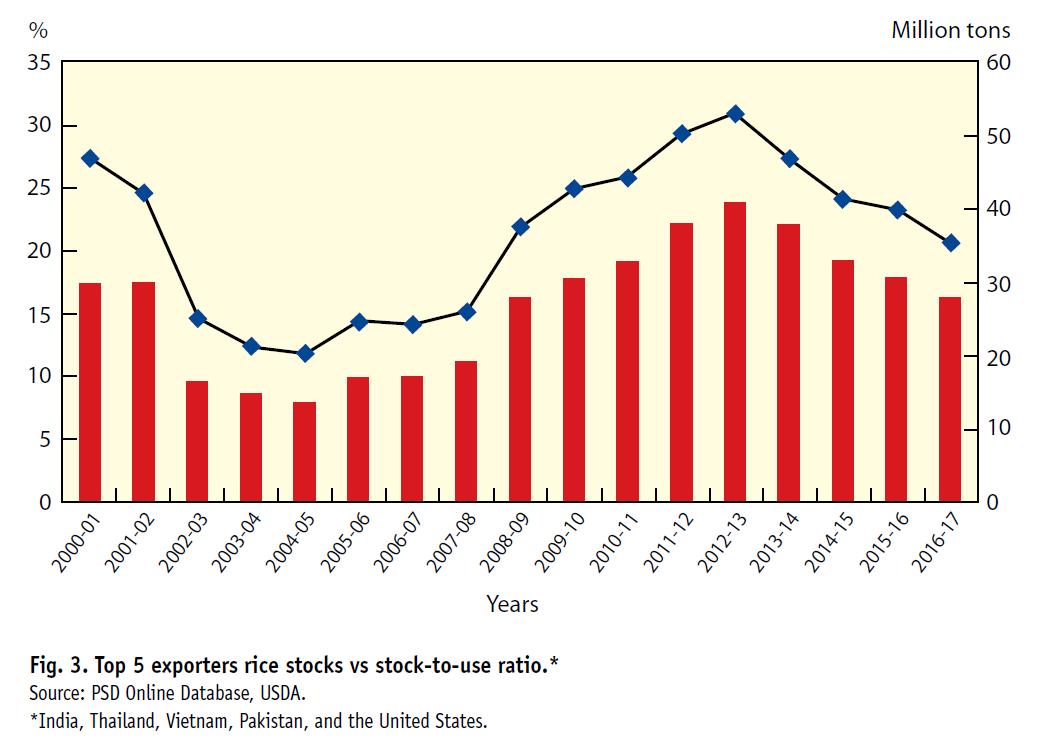 On the flip side, the active participation of India and China in global rice trade may bring a degree of uncertainty to the market because of their sheer size and their focus on domestic food security. Politicians will continue to fiddle with domestic and trade policies to support farmers and achieve greater domestic price stability and in the process may bring greater volatility to the international market.

The other traditional exporters in Asia namely Thailand, Vietnam, and Pakistan will continue to remain stable suppliers of rice to the international market. The emergence of Myanmar as a growing exporter should also help the stability of rice prices in the future.