Developing the hybrid rice technology capacity of national partners, farmers, nongovernment organizations, and the private sector is a major component of the AfricaRice strategy. 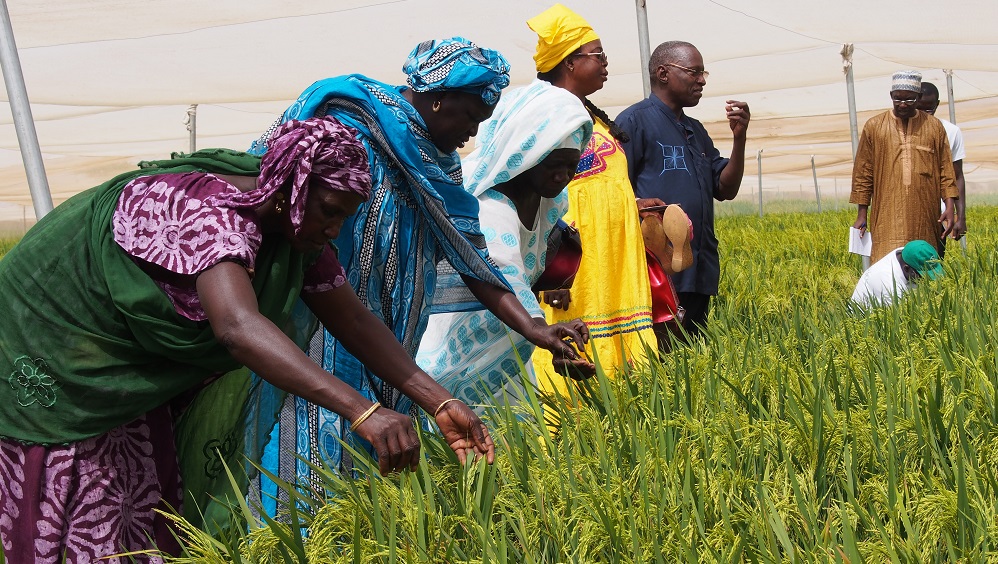 African farmers inspecting the early-maturing and high-yielding hybrid rice varieties developed by AfricaRice at Saint Louis, Senegal. Hybrid rice can provide an avenue for the farmers to raise their crop yields and profitability. (Photo by R. Raman, AfricaRice)

.
Africa, which has tremendous agricultural potential, is often described as a continent of paradoxes. Rice statistics reveal one such paradox. The continent’s average rice yields, estimated at about 2 tons per hectare (ha), are among the lowest in the world. Yet, Egypt, in northern Africa, has one of the highest national average rice yields worldwide, with nearly 10 tons per ha.

Egypt’s rice yields were boosted by the use of high-yielding inbred and hybrid varieties, according to the Food and Agriculture Organization of the United Nations. Egypt is the only country in Africa that has successfully produced several varieties of hybrid rice with grain yield of 12–14 tons per ha. It has also developed a strategy to produce hybrids tolerant of salinity and drought.

It is no wonder that Egypt is also the only country on the continent that produces enough rice for its domestic demand, with a surplus for export. It was inspired by China, where hybrid rice has contributed significantly toward improved food security, environmental protection, and job creation since the early 1980s.

Exploring hybrid rice potential in Africa
Most African countries are still far from self-sufficient in meeting their rice demand. In 2013, Africa imported 14 million tons of milled rice at a cost of USD 7.5 billion. The continent, therefore, needs to urgently improve rice productivity to reduce its heavy dependence on imports.

As a result of heterosis (hybrid vigor), hybrid rice shows a yield advantage of 15‒20% over the best inbred variety grown under the same conditions. It can provide an avenue for African rice farmers to raise their rice yields and profitability. 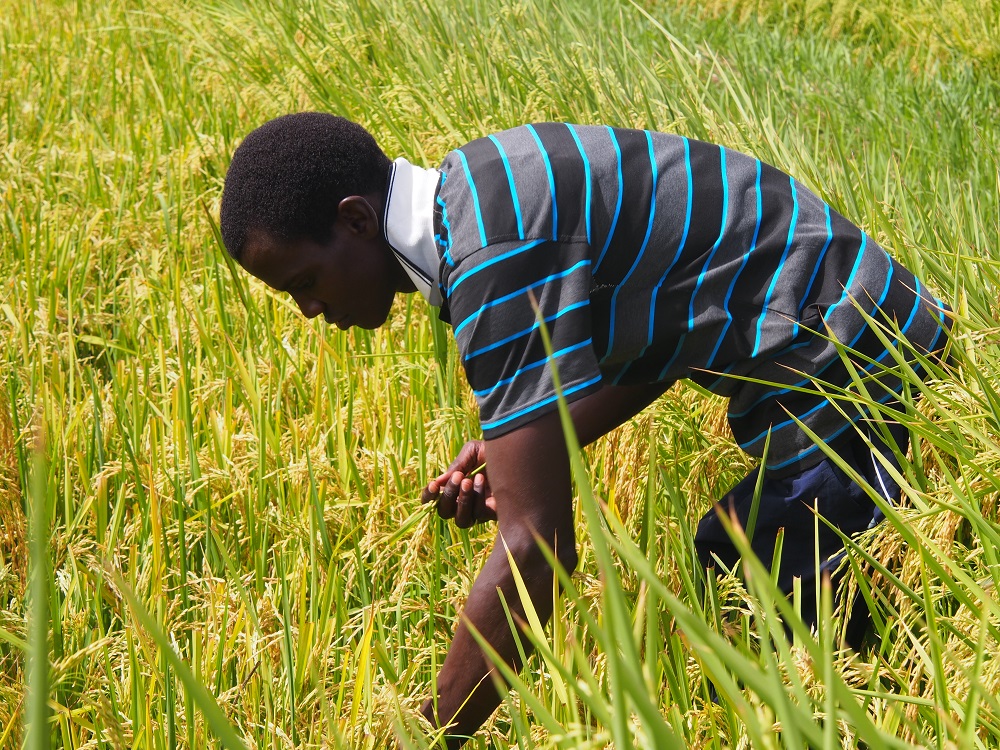 Hybrid rice technology, however, faces some major challenges. Farmers have to buy fresh seed every cropping season because the hybrid grain will not breed true if used as seed. Also, because of the high cost of hybrid seed production, hybrid seed is usually quite expensive. To make it economically viable, it is necessary to raise the yield of hybrid seed production to at least 2‒3 tons per ha.

Hybrid rice could also help African rice farmers get used to certified seeds because it is necessary to renew the seed every year. “In Africa, most farmers tend to use their own varieties and seed, despite the availability of improved seed; consequently, yields are low,” said Dr. El-Namaky.

The AfricaRice strategy: hybrid rice for sub-Saharan Africa
Green Super Rice (GSR) project: Since 2008, AfricaRice has been involved in evaluating Chinese hybrid rice lines in sub-Saharan Africa (SSA) through the GSR project to make Chinese rice cultivars (inbred and hybrid varieties) accessible to rice farmers in Africa and Asia. The project is coordinated by the Chinese Academy of Agricultural Sciences, the International Rice Research Institute (IRRI), and AfricaRice. 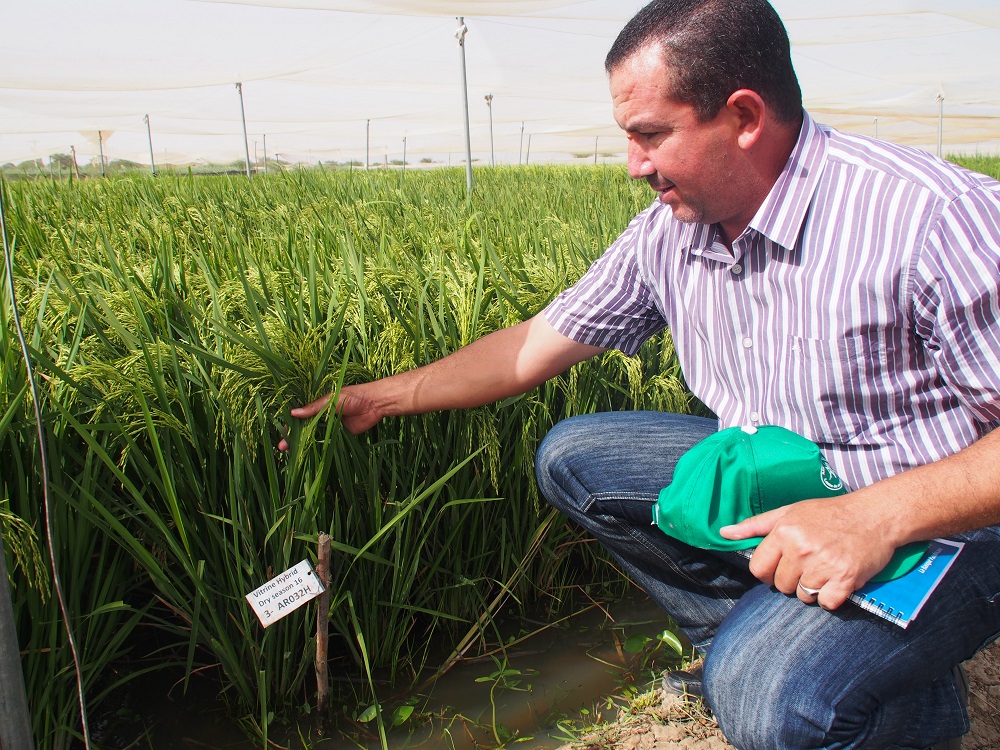 In the first phase of the project, most of the Chinese cultivars evaluated in SSA confirmed their high yield potential but succumbed to African insect pests and diseases. The second and third phases of the project are using African rice germplasm and GSR lines as donors for local adaptation. The project also conducts training in hybrid rice seed production.

To date, more than 500 hybrids and their parental lines have been developed and evaluated on-station in Saint Louis under irrigated and rainfed lowland conditions. About 50 hybrids showed a 15‒20% (1.0‒1.5 tons per ha) yield advantage over the inbred check. Most of them are early-maturing (110‒120 days) and high-yielding (10‒13 tons per ha).

“This will allow farmers to obtain high yield and grow two crops per year,” said Dr. El-Namaky. He added that most of these hybrids have good grain quality traits (medium and long grains with intermediate to high amylose content). Their milling percentage (degree of recovery) is more than 67% compared with 65% for the inbred check.

Developing the hybrid rice technology capacity of national partners, farmers, nongovernment organizations, and the private sector is a major component of the AfricaRice strategy. A new set of rice hybrids, with seed yield ranging from 2.0 to 3.5 tons per ha, developed by AfricaRice is being evaluated with public and private seed companies in Burkina Faso, Kenya, Mali, Mauritania, Nigeria, Senegal, and Uganda. A roadmap for hybrid rice testing, release, and dissemination in Nigeria and Mali has been developed. Technical backstopping and training on hybrid rice seed production are being provided. 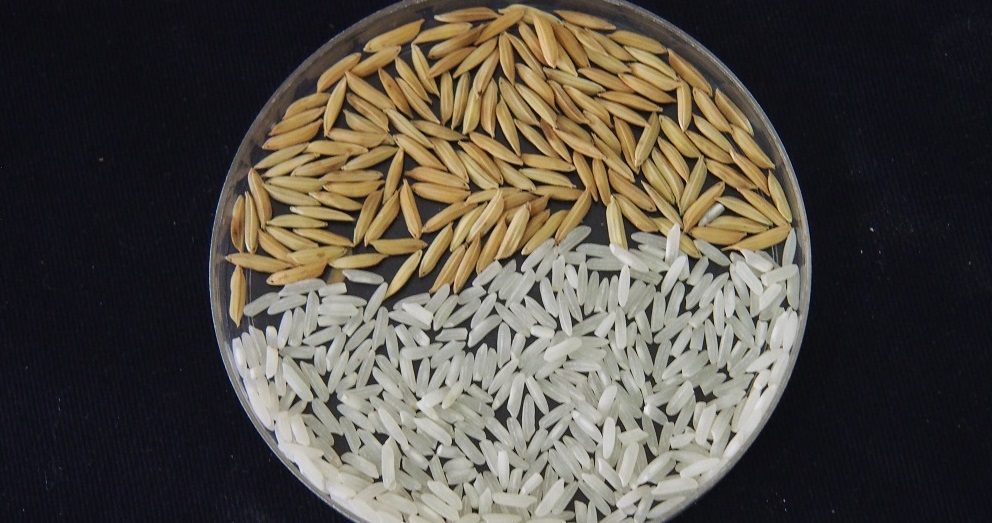 AR051H, an early-maturing, high-yielding and aromatic hybrid variety, developed by AfricaRice, has been selected for release in Senegal. (Photo by R. Raman)

“We insist that local companies be trained to produce hybrid seed within the subregion,” said Dr. El-Namaky. “Otherwise, if the hybrid seed is brought from Asia, there is a risk that rice diseases from Asia would spread here through the seed.”

Farmers’ choice
More than 100 farmers who participated in the hybrid selections over the past three years showed a keen interest in these hybrids. Out of the eight promising hybrids, they selected on-station, four were grown in large demonstration plots in farmers’ fields in Saint Louis. Two high-yielding and early-maturing hybrids—AR032H and the aromatic AR051H—were selected for release in Senegal.

“I would like to grow this type of rice so that I can earn more,” said Mrs. Sahibatou Gueye, a local rice farmer, after inspecting the hybrids.

Mr. Abdoulaye Faye, a farmer-entrepreneur, said the hybrids should be made available to farmers as quickly as possible, along with supportive measures from the government and training of farmers in seed production.

Mr. Omar N’daw Faye, head of the rice breeding unit at the Senegal Institute for Agricultural Research, assured that the selected hybrids would be released shortly in the country. “We also need to urgently build our national capacity in hybrid rice technology so that we can support our farmers and seed producers.” 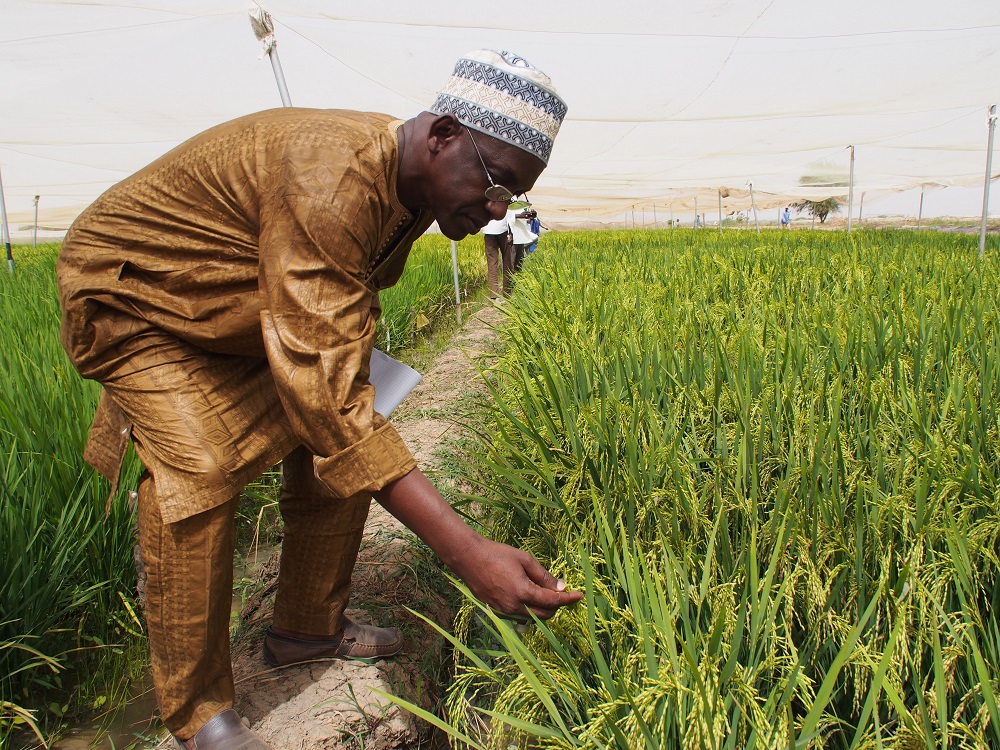 The way forward
AfricaRice will continue to support areas that are key to a successful hybrid rice program: establishing an efficient seed industry, developing high-performing hybrids, and improving capacity development.

AfricaRice is strengthening its collaboration with many partners, particularly through its participation in the Hybrid Rice Development Consortium (HRDC) coordinated by IRRI. HRDC aims to strengthen collaboration between the private and public sectors and improve hybrid rice technology dissemination.

“We encourage all partners to work with us, particularly the private sector, as it has more experience and capacity in this area,” said Dr. El-Namaky.
_________________________
Ms. Mohapatra is the head of Marketing and Communications at AfricaRice.

5 Comments so far. Feel free to join this conversation.

Leave a Reply to NADDEO EDOUARD