Innovations are occurring in all areas of science and, like the industrial revolution in the early 1800s that saved the world from the fate of the Malthusian trap, many of today’s advances will allow us to break free of poverty and hunger.

Years ago, while I was attending graduate school at Iowa State University, Dr. Kenneth Frey challenged each of us to write a paper for his advanced plant breeding course on what we thought would make the biggest contribution to plant breeding in the future. I selected computers and little did I know in the late 1970s how much this technology would shape and influence the future of science in general. 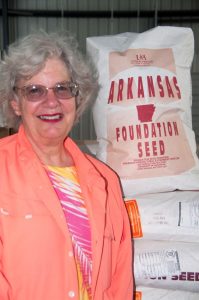 I know that computers have not only greatly influenced plant breeding and science today, but our whole world and our world view as well. Numerous techniques have been and are constantly being developed in the areas of plant breeding and it is impossible to keep up with all of them and still accomplish something. A technology revolution is occurring and, to paraphrase what others have said, the world of scientific knowledge is growing so fast and we, as scientists, are becoming more and more specialized and carving out our own areas of expertise, allowing us to thoroughly understand only a small part of what is happening around us.

Bearing this in mind, innovations are occurring in all areas of science and, like the industrial revolution in the early 1800s that saved the world from the fate of the Malthusian trap, many of today’s advances will allow us to break free of poverty and hunger. These advances give scientists and others the ability to increase the production of food, livestock feed, and fiber as well as create networks and the means to oversee the dissemination of the products to vulnerable populations.

In today’s world, information travels at a tremendous pace. We know instantly when there is an earthquake, flood, landslide, terrorist attack, act of war, etc. With the widespread use of open-access journals, scientific literature is available to everyone. And, with the many organizations such as the CGIAR centers, Food and Agriculture Organization of the United Nations, and International Atomic Energy Agency, which are located around the world working within countries, science is called into action to help those in underdeveloped and developing countries.

The rapidly emerging understanding of genetics, genome manipulating techniques, and the ability to tailor major food crops to contain important nutrients in the future will allow molecular geneticists and plant breeders to provide an increasing food supply. The products of new technologies such as CRISPR, which edits genes and is considered as nontransgenic by some, have the potential to create a whole spectrum of improved germplasm, including such traits as tolerance of adverse environmental conditions.

The use of drones to collect phenotypic data will increase at an exponential rate in the future, providing additional information for researchers. Huge phenotypic and genomic datasets can now be mined through bioinformatics. I envision a future in which plant breeders will be able to take a device similar to a Star Trek “tricorder” to the field and sample plants in an F2 population, identifying those that have a specified set of genes that are preloaded in the instrument, eliminating the need to take samples into the laboratory. Another future possibility is the ability to sequence plants right in the field.

These and other advances will provide plant breeders and other scientists with the opportunity to make rapid discoveries that could reduce poverty and hunger in vulnerable populations.

___________________
Dr. Moldenhauer is a professor of Crops, Soils, and Environmental Sciences at the University of Arkansas and a holder of the Rice Industry Chair for Variety Development. She is also a member of the International Rice Research Institute’s Board of Trustees.