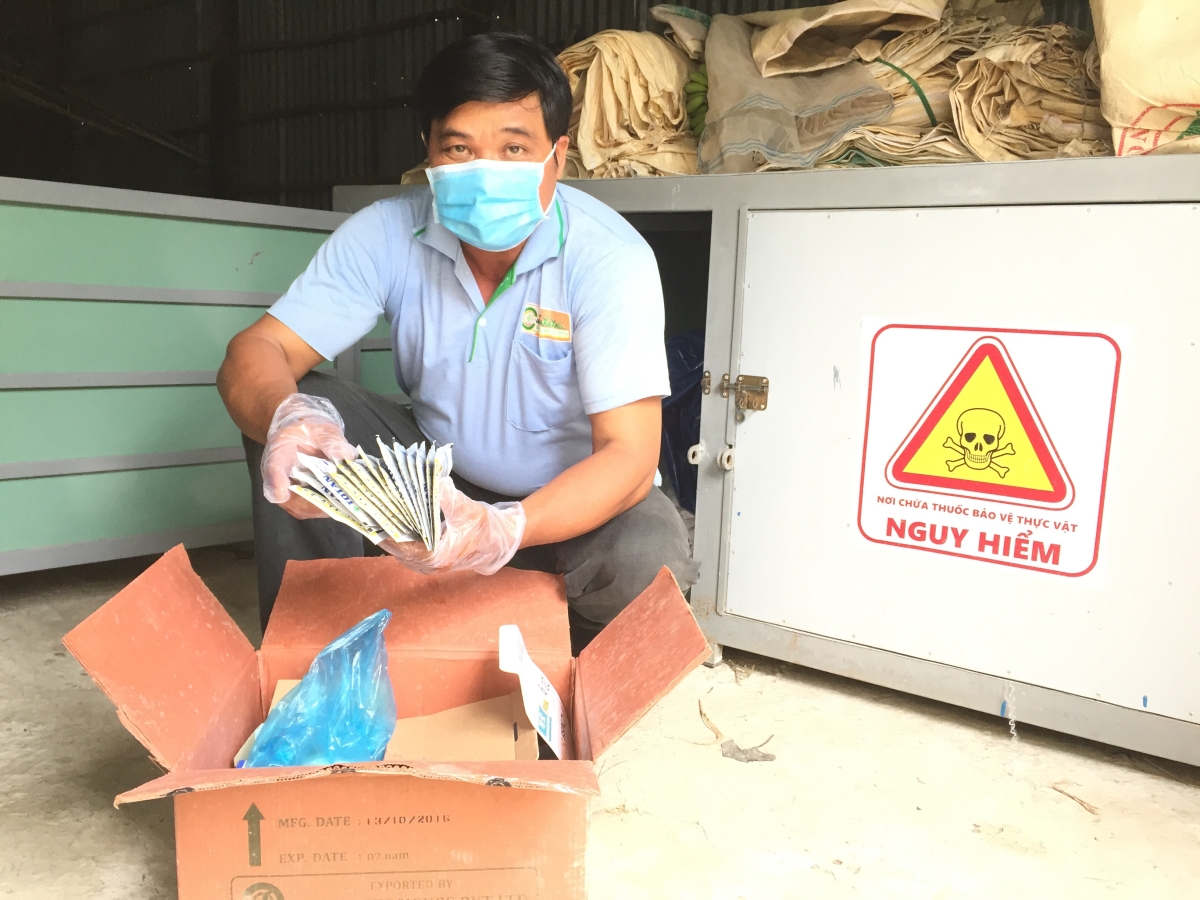 “Protecting my health and protecting the environment for the next generation are two of the most important changes for me,” Mr. Nhat, a rice farmer in An Giang Province, said after attending an SRP training. (Photo: Loc Troi Group)

Rice is the most important crop in Vietnam because it ensures national food security. Although Vietnamese rice has competitive advantages in the world market, the grain it produces often fails to meet strict quality standards.

From 2008 to 2013, China and Japan, two major buyers of Vietnamese rice, stopped importing the product after discovering it contained significant amounts of pesticide residue. In the first quarter of 2016, the United States rejected 1,700 tons of rice from Vietnam after detecting high levels of pesticide residue in shipments of the product. This was followed by a 33% decline in rice exports to the U.S. in that year.

Creating a sustainable brand
The Loc Troi Group, a leading provider of agricultural services and products in Vietnam, has been organizing annual rice production on hundreds of thousands of hectares in Vietnam. The company invests in agricultural inputs, transfers technology to smallholder farmers, and buys and processes rice for export under the corporate brand Hat Ngoc Troi. It believes that sustainable agricultural practices on-farm and throughout its rice-production value chain, including reducing greenhouse gas emissions and mitigating the effects of climate change, are key factors in building its rice brand.

To help it meet its goals, the Loc Troi Group joined the Sustainable Rice Platform (SRP) in 2015. The group also partnered with the International Finance Corporation (IFC), a member of the World Bank Group, to provide financial support to help the Loc Troi Group conform to agricultural standards and practices developed by the SRP.

Since becoming a member of the SRP, the company conducted SRP standard pilot testing with 150 farmers in the Mekong Delta—the country’s “rice bowl”—during the 2016 summer-autumn and 2016-17 winter-spring seasons. The pilot testing produced important results, particularly on the use of pesticides.

“One of the significant outcomes from this is the transformation of farmers’ awareness of sustainable production,” said Huynh Van Thon, chairman of the Loc Troi Group. “Images of agricultural waste bins, farmers wearing personal protective equipment when applying pesticides, and warning boards after spraying became familiar sights to farmers. Before the pilot testing, we often saw empty pesticide bottles and packaging along canals and rivers. Now, after the implementation of the SRP for only two cropping seasons, rice fields are impressively clean throughout the SRP sites.”

Healthy awareness
After his training, Mr. Nhat, an SRP farmer in Vinh Binh in An Giang Province, applied the new practices to his usual tasks, such as land preparation, seeding, and fertilizer and chemical application. He also recorded his farming activities in a diary under the guidance of agricultural engineers.

“Protecting my health and protecting the environment for the next generation are two of the most important changes for me,” Mr. Nhat told an IFC representative. “For example, when I spray pesticide, I need to follow the dosage compliance and wear personal protective equipment, including masks, goggles, gloves, and boots. After I am finished, I must keep a warning sign on my farm. In the past, we used to simply hang the protective equipment for chemical application in the house. Now, we lock it in a designated cabinet.”

According to reports of the Loc Troi Group on each pilot testing from the two seasons, this helped 150 farmers reduce their pesticide input by 25%, resulting in 17% higher profits and 10% lower production costs compared with non-SRP farmers. These results confirm the effects that the SRP brings to smallholder farmers, according to James Lomax, chairman of the SRP.

“The successful implementation of SRP criteria, in particular, and agricultural safety standards, in general, will not only benefit farmers, improve incomes, and protect the environment through plant protection chemical management,” Mr. Lomax said. “It will also bring opportunities to strengthen the rice brand for Vietnamese enterprises.”

Guardians of the environment
Currently, there are no standards and certifications related to greenhouse gas emissions or climate change in the rice sector in Vietnam.

Under the SRP standard, farmers are required to adopt certain practices in relation to greenhouse gas emissions. These include not burning rice straw and applying the alternate wetting and drying (AWD) technique for water use. ( See Climate change action plans for rice farming: from concepts to implementation.) These are documented in the farming diaries. SRP experts will calculate the amount of greenhouse gas emissions for each farmer’s field as part of the SRP performance scoring system. This allows the assessment of the impact of agricultural production on the environment and climate change. Through this, farmers could see the importance in protecting the environment and protecting the atmosphere as they practice sustainable rice cultivation.

High expectations
By the end of 2018, it is expected that 4,000 farmers will be applying the SRP standard in the production areas of the Loc Troi Group.

Although the quality of Vietnamese rice is still considered to be low, the implementation of the SRP as well as the bio-organic agriculture of the Loc Troi Group is expected to bring positive changes in making the country’s rice products safe and its agriculture sustainable.

“I strongly believe that, when the Vietnam rice brand gets stronger, the negotiations for higher rice prices will succeed,” said Mr. Nhat. “And, our lives will improve as well.”
___________________
Ms. Trang is a coordinator for international projects relating to agriculture at the Loc Troi Group.