The water management groups allow the coastal communities in Bangladesh to manage floodwaters and deal with poverty and food and income insecurities on their own. 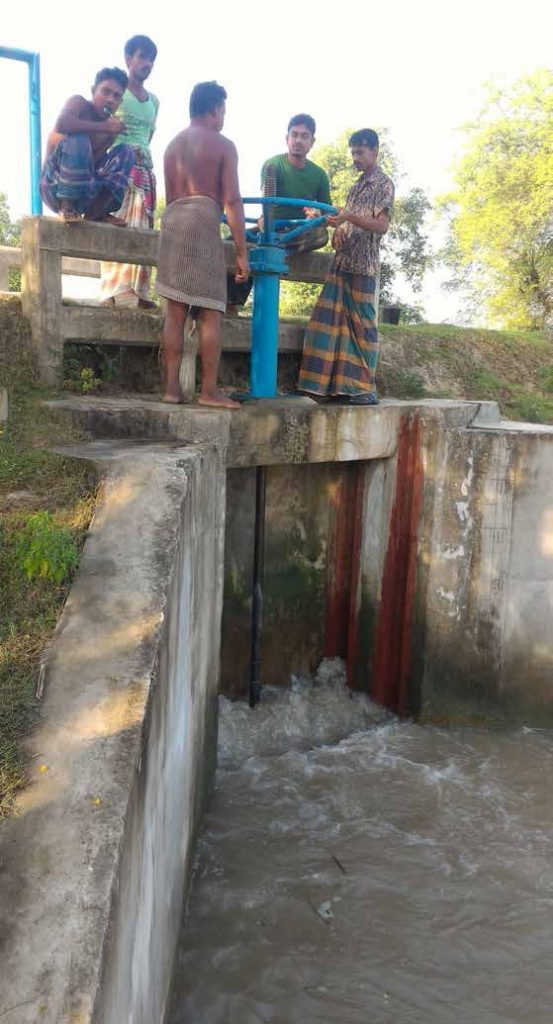 The lack of water governance in timing the opening and closing of sluice gate is a major hindrance to agricultural productivity in the polder communities of Bangladesh. (Photo: IRRI)

The monsoon season that comes once a year is part of the ecosystem in Bangladesh and an important source of water. It goes without saying that water is a vital need for humans, livestock, and crops. However, in Bangladesh, especially in its coastal areas, the problem is that there is too much of it—resulting in flooding. The water comes from the tributaries of the Ganges River. It flows to the southwestern coastal region where many farmers are affected. Moreover, storm surges from the Bay of Bengal aggravate the problem.

The coastal areas of the country have more than one million hectares enclosed by polders to control tidal flooding so that farmers can increase their productivity. Polder zones are mostly susceptible to climate change-related problems such as rising sea level and flooding. These problems put farmers in polder areas at a disadvantage, allowing them to plant only a single traditional rice crop per year. Thus, poverty is common in these areas.

Although the central and northern parts of the country benefited from the first Green Revolution, the polder areas were left behind because no varieties existed then that could tolerate salinity and flooding. The polder areas could not profit much from the ongoing second Green Revolution because of longstanding flooding that even modern flood-tolerant and salinity-tolerant rice could not withstand.

The problem lies in water governance—or the lack of it—in timing the opening and closing of sluice gates, which requires the involvement of the community.

Even if some farmers cultivate an early-maturing high-yielding variety, they cannot benefit from planting another crop because they have no control over the sluice gates, which determine the water coming into and going out of the farms,” explained Manoranjan Mondal, an IRRI water management expert based in Bangladesh. “This is where the water management group comes into play.

“Farmers can come together to talk about many things, including when to open or close the sluice gates,” said Dr. Mondal. “They need to agree among themselves when to plant their crops and what kind of variety to plant. If some cultivate early-maturing rice but others do not, then those who harvest earlier will have to wait for other farmers to harvest their late-maturing traditional crop before they can plant another crop.”

The water management groups (WMGs) allow the coastal communities in the country to manage floodwaters and deal with poverty and food and income insecurities on their own. 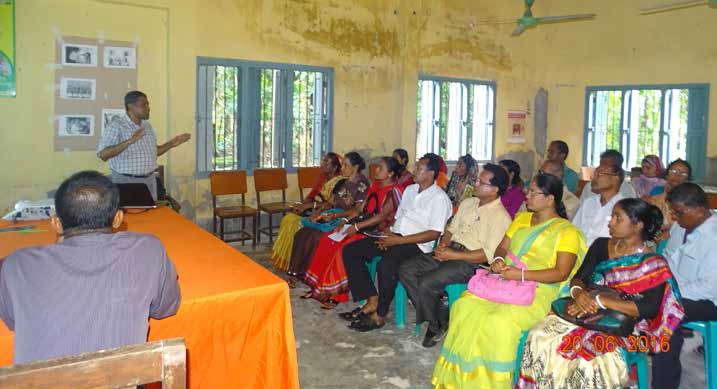 One example is the Fultala Water Management Group. Registered in 2014, the Fultala WMG covers 146 hectares and 262 households. It has 152 members, 85 of which are women. With a growing cash capital of BDT 61,000 or around USD 700, they already own some farm machines, including a power tiller, a power pump, and a thresher. They hope to be able to join a microfinance program once their capital reaches BDT 100,000 (USD 1,260).

But, they have a long way to go when it comes to water management. Since the political division is not the same as the hydrological management unit, the Fultala WMG will need to coordinate with other water management groups to attain synchronous rice farming. Even if Fultala WMG members agree on sluice gate operations, they will still be affected by the WMGs near them.

According to Dr. Yadav, scope exists to create a program based on information and communication technology (ICT) that will send and receive data from areas in a hydrological unit. In this way, coordination from one water management group to another will be easier.

“Truly, participation from the local community through the water management group affords people a sense of control over their own lives and livelihoods,” said Dr. Mondal. “With a simple change in water management, the road toward the project goal for people to increase their productivity and food security can be realized.”

Moreover, the prerequisite of women representing at least 30% of the membership in creating WMGs empowers women in molding the future of their community. Having the voices of women heard will have a positive influence on the cultural aspects of their lives. As women leaders start to rise to the occasion, other women and girls will view this as the “new normal.” This could trigger a ripple effect of empowered women ready to play more significant roles in the community.

Ms. Reyes is the editor-in-chief of Rice Today.