A new approach in showcasing the advantages of stress-tolerant rice varieties is helping convince more farmers to make better choices. 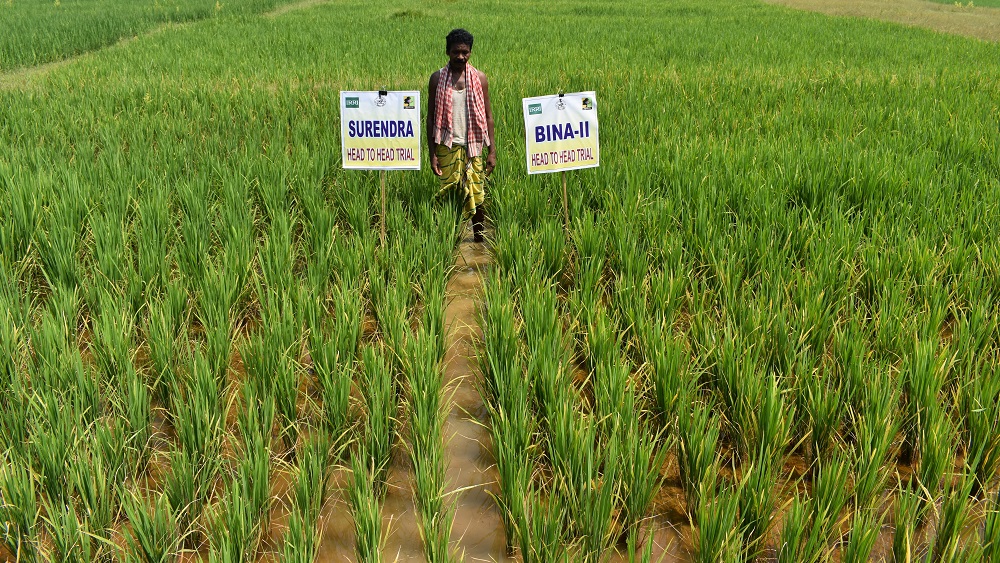 An H2H trial in a farmer’s filed in Odisha comparing the performance of the flood-tolerant BINA dhan-11 and Surendra. (Photo: IRRI India)

Climate change is one of the biggest challenges facing millions of farmers. In the Indian state of Odisha, over a million hectares of cultivated rice areas are prone to drought- or flood-related stresses, or both, triggering crop failures that disrupt livelihoods. But there are many solutions available which could reduce climate threats on agriculture and farm productivity. The large-scale introduction, adoption, and scaling of stress-tolerant or climate-resilient rice varieties is one step in helping climate-proof farms.

However, barring one or two, many varieties are new to the region and—even though many stress-tolerant varieties are introduced year after year—farmers are hardly aware of them and are unfamiliar with the performance of these varieties against the traditional ones. Consequently, they often do not adopt the varieties that could help them cope with the environmental stresses that affect their land.

Challenges and potentials in the varietal-adoption scenario
One of the possible reasons for the low scaling and adoption of new varieties could be the lack of efforts in the varietal delivery programs for creating awareness and farmer-centric learning. Traditional extension programs that primarily concentrate on large-scale demonstration sites usually do not take into account the constraints associated with smallholder farmers.

To show the best possible performance of a new variety, these demonstration sites create ideal conditions that might not be within the farmers’ capability and resources. Moreover, these demonstration sites tend to show farmers only the yield and associated parameters in a standalone setup. In fact, farmers’ preferences are more complex. There are other factors that guide their decision-making process that is overlooked having missed the entire crop production stages. Without having a control plot, traditional demonstration plots also do not provide a comparative performance of a new variety.

Head-to-head trials: An extension innovation in farmers’ field
To remove the barriers of the learning process, head-to-head (H2H) trials are designed as a tool of extension and learning for varietal promotion programs on farmers’ fields. Concentrating on stress-tolerant rice varieties, these H2H trials are being conducted on a considerable scale in Odisha to demonstrate and compare the performance of new varieties against the farmers’ varieties.

The design
Making a “target technology” relatable and in the context of local conditions are two key drivers that greatly influence farmers’ adoption.

H2H trials are comprised of a new variety and a farmer’s variety of similar duration that are sown and managed in two halves of same plot or adjoining plots within the same farm. The two varieties are grown under the same management practices and inputs. The idea is to create an opportunity for the participating farmer and his fellow farmers to observe and assess the advantages of the new variety over their regular ones in terms of yield, season-long crop growth, and overall performances.

By keeping the management and input constant, the method not only puts the demonstrations in the perspective of a farmer and locality. It also creates a continuous comparative learning process throughout the season where the two varieties can be assessed in one place. This helps the farmers attribute the overall performance and yield advantages to the variety alone and not to any other management practices or triggers. (See Table 1, above.) 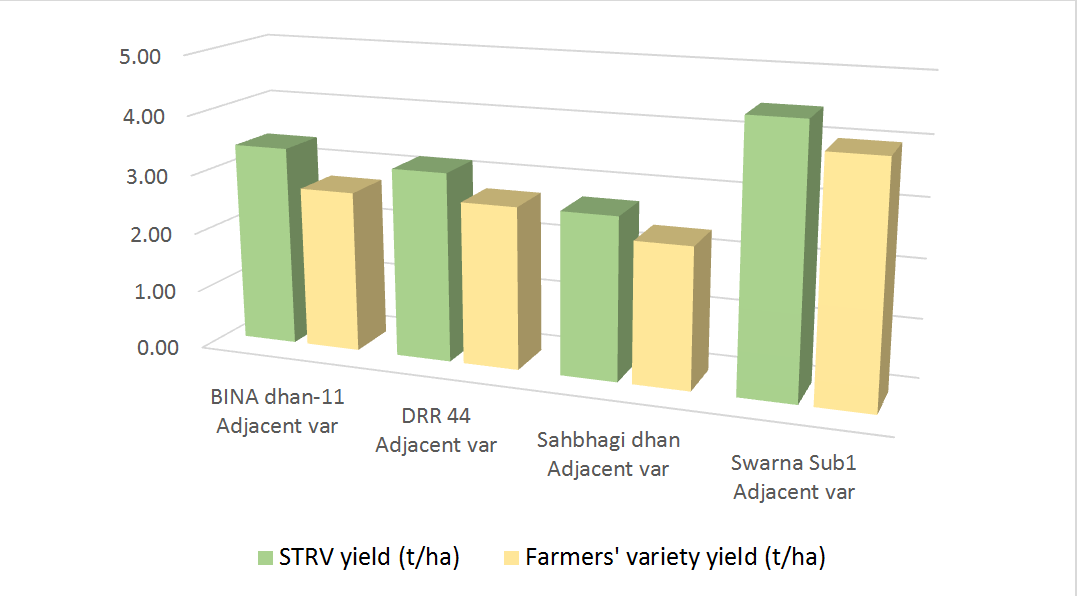 Results from the fields
Since kharif 2017, more than 5,000 H2H trials of multiple stress-tolerant rice varieties have been laid out in farmers’ fields across Odisha. The climate-resilient varieties include the DRR 44 and Sahbhagi dhan for drought-prone upland ecology and the Swarna Sub1 and BINA dhan-11 for flood-prone inland or coastal areas.

A detailed study in 2017 was conducted for an interim evaluation of the performance of the stress-tolerant rice varieties against the local varieties covering a sample of nearly 500 farmers (trials) spread across stress-prone areas in 11 districts in Odisha. It was observed that the new varieties had a considerable yield advantage over the local checks.

The yield differences reported by farmers about the stress-tolerant rice varieties’ yield potential and advantages over their own varieties could trigger the adoption and informal dissemination of varieties within the community. (See Figure 1, above)

Although the year did not experience any severe droughts or flood, there were reported cases of intermittent periods of stress that were collected to validate the findings and support future information. Table 2 below summarizes the stress scenarios for the different varieties in different districts.

Under drought conditions, both DRR 44 and BINA dhan-11 were reported to have considerable yield advantages over the local checks.

The study also attempted to comprehend the farmers’ perception of the stress-tolerant rice varieties they cultivated in the H2H trials. This was necessary to analyze if better yields observed in H2H demonstrations can trigger farmers’ varietal replacement decision. Farmers who experienced a certain degree of drought or flooding have articulated their perceptual experience which is important for the next course of action to boost the adoption of stress-tolerant rice varieties. Figure 2 (below) shows the percentage of these farmers who are considering and are ready to adopt new varieties. 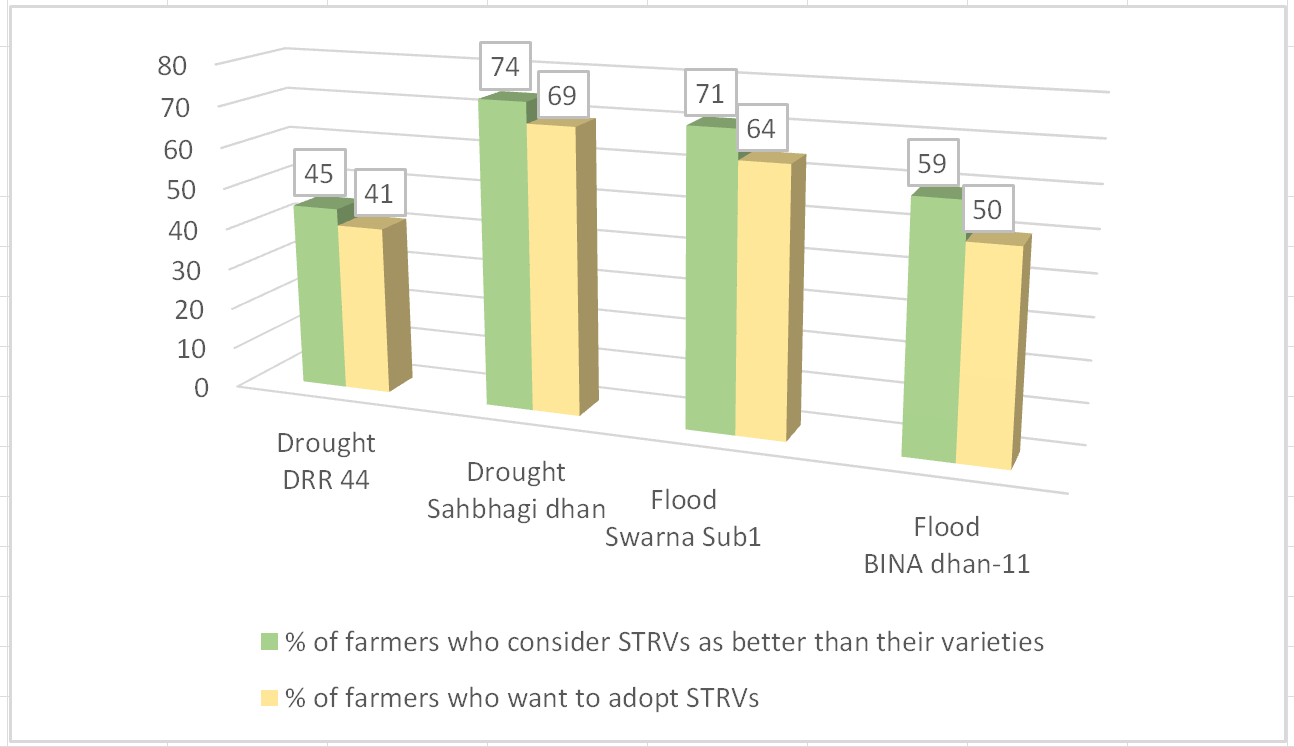 The level of acceptance of stress-tolerant rice varieties in the farming community within the first year of introduction through H2H trials was phenomenal. Forty-five percent of farmers who cultivated DRR 44 and experienced drought said the new variety did better than their traditional varieties and 41% wanted to replace the old with the new variety.

Surprisingly, Sahbhagi dhan made a better impression with the farmers. Although 69% of them were ready for varietal replacement with Sahbhagi dhan, 74% actually think it is better than the varieties have been growing for years.

In flood-prone areas, Swarna Sub1 has earned a huge acceptance. The two corresponding figures for this variety are 71% (acceptance) and 64% (readiness to adopt). For BINA dhan-11 it is 59% and 50%, respectively.

Going bigger
The observations from the initial intervention indicate that the experiential learning of H2H trials played a key role in influencing the perception of farmers about new varieties as well as their decision-making. Detailed and large-sample studies in the future could strongly support the validity of these early findings and establish H2H trials in farmers’ fields as an innovative and effective extension method with the potential to change the face of varietal delivery programs in Odisha.

Mr. Hossain and Ms. Nayak are the M&E specialist and lead specialist, respectively, in the Seed & Delivery Systems cluster at IRRI India. Ms. Saksena is a communication specialist for the Stress-Tolerant Rice for Africa and South Asia project in India.