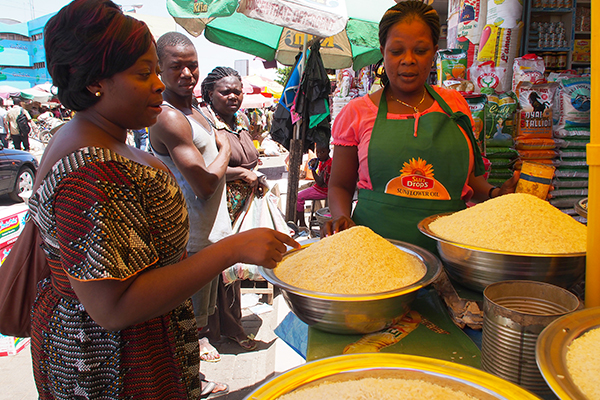 About one-third of the food produced in the world never reaches our plates. Not only is this a colossal loss but all the resources used to produce, harvest, process, and market it are also squandered.

Postharvest grain losses account for US$4 billion in Africa alone, according to the CGIAR Research Program on Climate Change, Agriculture and Food Security. This is enough to meet the minimum annual food requirements of 48 million people.

In Africa, both the quantity and quality of rice suffer huge losses, especially during postharvest operations.

“The qualitative losses come mainly as a result of poor handling after harvesting and poor processing techniques,” wrote John Manful, a grain quality scientist at the Africa Rice Center (AfricaRice) in Quality matters for rich and poor alike.

Until recently, R&D thrusts in Africa have focused mainly on how to increase rice production but relatively less on how to improve the quality of rice.

“Since the food crisis in 2007-08, governments in African countries have made great efforts to increase rice production, but still quality is less emphasized,” said Dr. Rose Fiamohe, policy economist at AfricaRice.

In many African countries, locally milled rice is of variable quality and it has a high percentage of broken grains. Sometimes, unhusked grains as well as bran and husk fractions are found in the milled rice. The inferior quality of local rice makes it less competitive against imported rice on the market. Thus, African rice farmers find it so difficult to sell their rice because locally produced rice is widely perceived as being of poor quality.

‘If you raise the production of local rice but you are not doing anything to change the perception of the people, you will not progress much in promoting local rice consumption,” said Ms. Lena Forson, an MPhil student at the University of Ghana.

Rising to the challenge, Canada’s Department of Foreign Affairs, Trade and Development (DFATD) and AfricaRice, in partnership with McGill University, are spearheading an ambitious project on food security in Africa with a focus on rice postharvest handling and marketing.

More smallholder farmers and processors in Africa’s rice sector are women who often have fewer rights than male farmers to access the vital resources they need to farm, process, and sell. The project will therefore make sure that women farmers will obtain their fair share of attention in rice R&D.

The project also aims to develop new rice-based products, explore innovative uses of husks and straw, improve the policy environment, and build the capacity of rice stakeholders. By 2020, postharvest losses are expected to decline by 10% and this will help increase farmers’ nominal annual income in the eight project countries by about $32 million.

The project has conducted baseline studies on postharvest practices in the eight countries. “This is the first of its kind for rice in Africa,” said Dr. Manful. “We now have reliable data on postharvest losses in rice from these countries.”

Surveys are being conducted to develop a map of rice consumer preferences for some of the countries. Project countries have been provided with lab equipment to do basic quality analysis of rice.

The project is testing and introducing mini combines, threshers, dryers, and cleaners that are affordable for farmers and processors. Most of these machines are being made and maintained locally. Senegal, Mali, and Ghana have started building mini combines after receiving training. Milling machines that will improve the separation of husk and bran are also being identified.

“Each project will have national fabricators; we train one lead fabricator who will continue training others,” said project coordinator Dr. Jean Moreira.

In 2013, 57 fabricators from 10 countries were trained to construct the ADRAO-SAED-ISRA (ASI) thresher-cleaner. A light thresher has also been developed especially for women farmers in Uganda.

The project has promoted the development of equipment for parboiling. McGill University is providing technical backstopping to national partners to develop a parboiling pilot plant.

Also, the project will enable screening of African rice (Oryza glaberrima) germplasm for constituents that make cereal grain slow-digesting to help consumers with Type II diabetes. It is also testing the use of low-value broken rice as the basis of a breakfast porridge fortified with protein-rich groundnut or soybean for undernourished babies and children.

The project is using flour from broken rice to prepare food products such as noodles, biscuits, and porridges. “Tasty and innovative uses of rice can catalyze rural enterprises and raise income, especially for women farmers and processors in our region,” said Ms. Lynda Hagan, scientist at the Food Research Institute (FRI) in Ghana.

Rice straw: Farmers in Africa mostly dispose of rice straw from fields by burning it, which helps control rice disease and pest problems. However, burning of rice straw emits carbon dioxide (CO2), which is the major cause of global warming.

As part of the project, AfricaRice, in partnership with FRI, is supporting a study in Ghana to assess rice straw and husk as potential substrate in cultivating oyster mushroom. The study also ascertained the potential of the spent compost (the organic matter left over after mushrooms grown on rice straw have been harvested) as a biofertilizer.

Rice husks: Traditionally, rice husks (or hulls) are wasted in Africa. Stockpiles of rice husks are either dumped near the mills, where they rot, producing methane (a potent greenhouse gas), or burned in the fields, thus polluting the atmosphere.

The project has developed a machine to compress rice husks to make briquettes, which burn efficiently in any well-ventilated stove. “This, we think, is an important step in reducing deforestation,” said Dr. Sali Atanga Ndindeng, grain quality and postharvest scientist at AfricaRice.

The project will feed into AfricaRice’s ongoing efforts to harmonize rice policy across the region through the regional economic communities.

“In the long run, rice will be cheaper when the continent is producing most of its rice from here,” remarked Dr. Aliou Diagne, former program leader of Policy, Innovation Systems and Impact Assessment at AfricaRice.

Scientists are working with producers to improve quality and processing, while also working with consumers to encourage them to buy local rice. Experimental auctions have revealed that consumers choose local rice and are also willing to pay more for it.

Building the capacity of rice stakeholders throughout the value chain, from farmers, through millers and parboilers, to marketers is a vital part of the project.

“We have had lots of cross fertilization of ideas and scientific outputs thanks to the project,” observed Dr. Paa Nii Johnson from the Council for Scientific and Industrial Research in Ghana. “Some of the success stories can be replicated and scaled up through the Rice Hubs network initiated by AfricaRice.”

By helping actors along the value chain add value to rice, the project is helping raise income, improve rice quality, and expand the market for locally produced rice products.