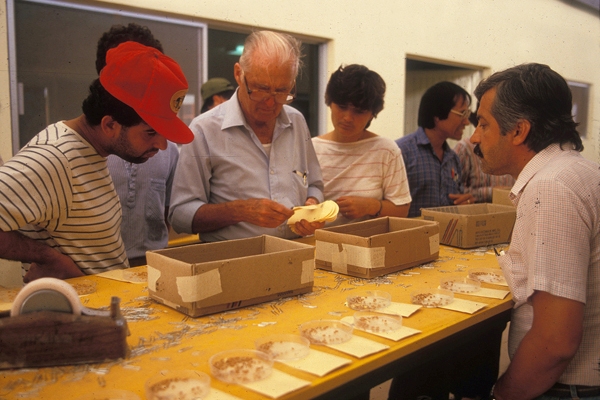 ON 25 MARCH 2014, the agricultural world celebrated what would have been the 100th birthday of Norman Borlaug (at center with trainees in Mexico in the early 1990s), the legendary scientist who developed highyielding semidwarf wheat that started the Green Revolution for that crop.(Photo: Gene Hettel)

Norm Borlaug (at center in photo above) had no illusions that the Green Revolution was anything other than a means to buy the world time. Time—to get our house in order to stabilize our populations, generate the knowledge that would allow us to support ourselves without destroying the environment, and enable most people to live in dignity. The expectation, he told me in several conversations in the early 2000s, was that we as societies would take up the new knowledge and use it wisely.

As an intellectual direct descendant of the architects of the Green Revolution, it is heartbreaking to see their noble endeavors attacked by people claiming to defend the environment and the interests of the poor. I know that, if we continue to listen to the shrill cries of antitechnology zealots, we will be distracted from taking on and solving the most serious problems that face us and our grandchildren.

Like many of my colleagues, I came to agriculture via the environmental movement. My university readings included Rachel Carson, Aldo Leopold, Muir, Thoreau, the Whole Earth Catalog, and, perhaps most importantly, Paul Ehrlich and the Paddock brothers, whose bestselling books predicted mass starvation in Asia. Being part of the organization of the first Earth Day (22 April 1970) at the university was key, as was a sense of social justice. My mother’s side of the family dug themselves to their deaths mining the coal seams of western Pennsylvania. That, together with the war in Vietnam and the global social upheaval of the 1960s, instilled a healthy distrust for authority and big business, and a knee-jerk response whenever possible to “stick it to the man.”

As a Peace Corps volunteer in Zaïre (now known as Democratic Republic of the Congo), I saw close-up the havoc unleashed by an epidemic in the cassava crop. I witnessed the ecological destruction as villagers desperately slashed and burned swaths of tropical forest to meet immediate food needs. I was preparing myself for a career in plant ecology, but the misery caused by crop diseases was clear. They could be triggered by human mistakes and ecological disruptions, but they could also be tackled through human ingenuity and science.

I made contact with the only person in the U.S. I could locate with an interest in cassava diseases, Professor H. David Thurston at Cornell University. It turned out he was a contemporary and close colleague of both Borlaug and Peter Jennings—who developed the first semidwarf rice varieties that launched the other half of the Green Revolution. Dave opened the door for me to international agricultural research. He also regaled me with endless tales of the personalities who, trudging their way through small farmers’ fields in the 1950s and 1960s with funding from the Rockefeller Foundation, strove to transform the lives of desperately poor farmers.

DR. ZEIGLER (fourth from right) and IRRI staff interact with farmers on their turf whenever they can.

All these greats had something in common—a fire in the belly to try to make a mockery of the doomsday predictions of Ehrlich (The Population Bomb) and the Paddock brothers (Famine 1975). The flaw in these predictions was obvious to me, even as a student. They assumed that the future would be like the past. The role of science was precisely to make the future different from the past.

Soon, I was to meet one of these greats, Peter Jennings, at the International Center for Tropical Agriculture (CIAT) in Cali, Colombia, where I would conduct part of my PhD research on a cassava disease. We argued endlessly about the best approach to developing lasting resistance to plant diseases. He was proud of the advances he and his colleagues had made in raising rice yields in Asia and Latin America but saw that, for these to be sustained, and for the overall health of the environment, the way crops were grown had to change (see Where Latin America’s rice gets a baptism by fire).

By the late 1970s and early 1980s, the shortcomings of the early phase of the Green Revolution were becoming clear. The most serious were the overuse of pesticides and fertilizer, and the inevitable transformations of the rural sector, where many, many gained but some, especially those in marginal environments, lost out. A backlash began among leftist academics who viewed the Green Revolution as a way for capitalist governments and multinational corporations to subjugate small farmers. This view was helped by the fact that some oppressive Westleaning governments were avid champions of the Green Revolution.

As the worst examples of the Green Revolution’s side effects became manifest, environmental concerns became part of the mainstream consciousness, culminating ultimately in the United Nations Rio conference of 1992. But that conference framed a false dichotomy that continues to this day, between a healthy environment and idyllic, contented farmers on one side and a high-yielding agriculture on the other.

I began to experience cognitive dissonance. My firsthand experience with impoverished small farmers in the developing world was placing me at odds with my ideological brethren.

Our understanding of genetics and the ability to proactively manipulate how plants behaved and responded to the environment was becoming a reality. Many of us saw this as a way to reverse the negatives of the Green Revolution and open the way for, in the words of Sir Gordon Conway, a “doubly green revolution.”

SUBMERGENCE-TOLERANT variety Swarna Sub1 is drastically changing the lives of farmers in the flood-prone areas of eastern India.

It was easy to see that we could engineer into crops resistance to insect pests and pathogens that would eliminate the need for spraying toxic chemicals that sickened every organism they touched. Even better, we could now help the people left behind because they lived on lands plagued by droughts or floods that wouldn’t support modern crop varieties. I have seen this dream validated. India’s untouchable communities (the lowest class) often farm on marginal flood-prone land. IRRI’s flood-tolerant rice is most useful to these farmers and promises to transform the lives of millions.

In short, we saw modern biology as a driver for transforming agriculture into a tool for protecting the environment, meeting food needs, and reversing millennia of injustices that condemned certain segments of the population to the worst land.

Sadly, while we were working to make our dreams reality, the strange brew of anticorporate sentiment, extreme environmentalism, romanticized traditional organic but land-hungry agriculture, and fear of new technologies boiled over to create a powerful antitechnology backlash. The extreme regulations for genetically modified (GM) crops demanded by self-proclaimed protectors of the environment had the perverse result that only the largest multinationals could afford to develop such crops. Predictably, this resulted in the same camp denouncing the growing domination of agriculture by multinationals. As costs for developing crop varieties escalated, the few seed companies that could afford the work focused only on areas with large markets. Marginal farmers were once again excluded.

This time, though, who is to blame?

This edited version of the article is reprinted with permission from COSMOS magazine.