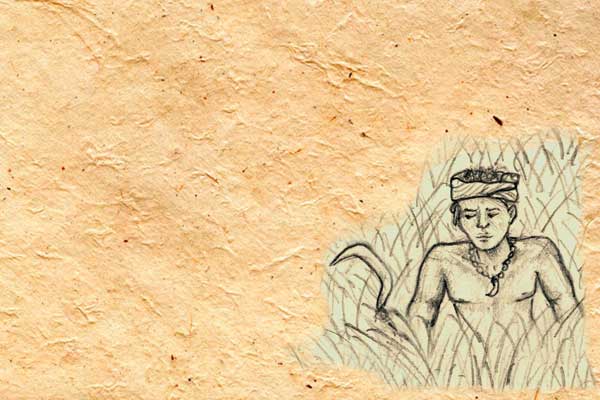 In the northeast corner of the Himalayas, where the mountain mists meet the land, the jungle grew thick and lush. Here lived the Ao Naga tribe. It is believed that the tribe migrated there from northern China or Mongolia many centuries ago.

The men of the tribe hunted in the forests and fished in its many streams while the women toiled in the rice fields. Yet, food was never enough, for it was difficult to keep back the jungle from the fields.

A wise old man with his grandson lived in the village. “It is all very well to hunt and fish,” he called to the men. “But the rice fields need your care.”

“What is the use?” said the men. “The jungle is too powerful. Besides, working the fields is women’s work.”

So saying, they laughed and went off. The grandson wanted to join his friends but the old man refused to let him hunt and fish. “Help me first in the rice fields.” he said.

Reluctantly, the lad worked alongside his grandfather.

“Not a single man works here, Grandfather.” he grumbled. “Why should I?”

The old man did not answer.

In the morning, the old man called to one of the men as they left. “Can you bring me a live fish from the stream?”

That evening, he put the wriggly fish that was brought to him in the water trough. “Tomorrow, you must catch that fish by hand and cook it,” he told his grandson.

Next morning, the old man went off to the fields alone. Meanwhile, the lad spent the entire day catching the fish by hand. But, try as he might, the fish wriggled out of his hands.

“If you can’t catch a fish in a trough, how will you catch one in the stream?” said the old man at dinnertime. “Tend to the rice, and the fish will come.”

Months went by as the old man and his grandson worked in the rice fields. Together, they kept back the forest, transplanted the rice, and weeded the fields. The paddy grew tall and green.

Meanwhile, the women in the other fields struggled as they tried to cut back the forest and care for the paddy. The weeds and the birds destroyed the plants.

At harvest time, the grain in most fields was thin and straggly. But, in the fields of the old man, the paddy stood thick and golden. He and his grandson gathered in the grain and filled two large granaries.

Then winter came. The animals had gone and the streams had few fish. While the villagers starved, the old man and his grandson had plenty of rice to eat. Soon, the villagers came to them.

“Please give us some rice,” the hungry villagers pleaded.

The old man gave them some rice but he made them promise to bring him some fish and meat. So, every day, through the winter, the old man shared his rice with the villagers. And each day, they brought him some fish or game. “If only you had listened to me and helped the women in the rice fields.” he said, shaking his head.

Spring came and it was time to plant the paddy again. This time, the men joined the women in the fields. Now, they went hunting or fishing only after the chores in the rice fields were done.

“You can join the hunt,” the old man said and smiled at his grandson.

“After I’ve tended the paddy, Grandfather,” laughed and lad. “When there is rice in the barn, all else will follow.”

Ms. Roy is a freelance writer who is based in Singapore.

Ms. Lazaro is a fine arts student at the University of the Philippines Diliman.