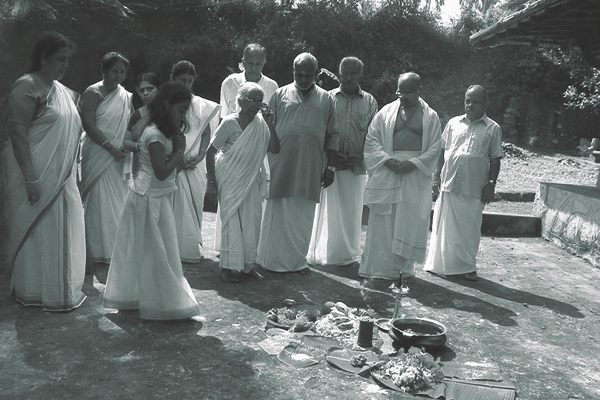 In Malayalam, the predominant language spoken in the Indian state of Kerala, Regulus, the 10th asterism, consists of a sickle shaped group of stars in the front of the constellation of Leo. This auspicious pattern of stars symbolizes good fortune, happiness, wealth, and charity. In Kerala, makam in the month of Kanni (September- October) is a day marked to honor rice. In many regions of Kerala, it is observed as dhanyasamridhi, the harvest festival.

But, in southern Travancore, the day is celebrated as the birthday of rice, a ritual found nowhere else. This devotion to rice begins with the plowing and sowing ceremony in April or May and culminates during harvesting from September to October.

KERALA’S TRADITIONAL ceremony celebrating the birthday of rice beautifully illuminates how the grain has influenced and enriched its culture. Photo by Hari Krishnan Nair

The rice grain becomes an object of worship by grateful people among rice farmers all over Kerala on the day of makam (the 5th of October). The paddy grain enjoys complete rest, as no one tills or plows the land, boils paddy, pounds rice, or barters or trades in rice on that day. Rice is pampered instead, through various birthday rituals that have been passed on from generation to generation.

Wearing ceremonial clothes after a ritual bath, the head of the family, a maternal uncle, or a maiden born under the makam randomly gathers seven grains of rice that fall from the sheaf of harvested rice from the pathway as they are carried home on heads from the fields.

Some of the collected grains may contain pests. By throwing back one such grain at the place from where it was picked up, and another grain at the conduit through which water is let into the field or in the household well where it was given a ceremonial bath, this ensures a balance of five healthy grains.

From grains to a goddess

These five grains, anointed with sacred ashes, sandalwood paste, and kumkum (a powder made from turmeric or saffron), are placed with great reverence, on a sacred cloth on a sacred platter or tray known as taalam. The Malayalam word taalam means the throne of Durga. In a way, the ritual symbolically enthrones rice grains to goddess-ship.

In some other places, the grains are placed either on the end portion of a plantain (Musa paradisiaca) leaf or on seven leaves of the strychnine tree (Strychnos nux-vomica L.). The former plant is associated with the Hindu goddess Parvati, the consort of Lord Shiva, and the latter with rice cultivation as the plow and granary are made from its wood.

After offering flowers and a lighted lamp, the taalam is taken to a chamber found in traditional houses, called the thekkepura, accompanied by a chorus of the household women. As an homage to the goddess, incense is burned to purify the air in the room.

The goddess is fond of paachoru, a rice pudding made by boiling rice with milk, sugar, jaggery, rice, coconut, and turmeric. Household women in a state of purity cook this dessert and, after offering it to the goddess, they serve it to the farm workers and family members.

Unfortunately, this unique birthday celebration has all but faded from Kerala’s tapestry of traditions. In the seventies, the rice-based agriculture in Kerala shifted to other crops, as rice production in other Indian regions increased. The lack of farm workers in the state also contributed to the changing landscape.

With the disappearance of the once gloriously verdant rice farms of Kerala, the celebration of this ritual dwindled and now takes place only in a few isolated places.

The birthday ritual is seldom observed these days, lamented Gourikutty Amma, a long-time resident in Kerala who still lives in the roughly 500-year-old house of her ancestors that faces the erstwhile rice fields.

Eighty-six-year-old Gopinathan Nair (passed away recently) remembered his heyday of youth when he witnessed his father performing the ritual of rice’s birthday and later doing it himself. However, ever since rice cultivation in Kerala diminished, he had to discontinue this practice, which was handed down to him by his forefathers.

The article is adapted from Dr. Nair’s upcoming book Traditional houses of Travancore: A gateway to prehistory. His recent book, Rice: in Ancient Kerala (Kerala Sahitya Academy, Trichur) devotes a chapter describing the celebration around the birthday of rice which falls on Regulus, in Virgo, the sixth sign of the zodiac. This enabled him to work out the astronomical alignment, and fix the year of birth of this practice to 3102 BC. Apart from Regulus, he explores in this book two more asterisms; Orion as the plough star and Sirius as the dog star.

Dr. Nair is an academic and Indologist