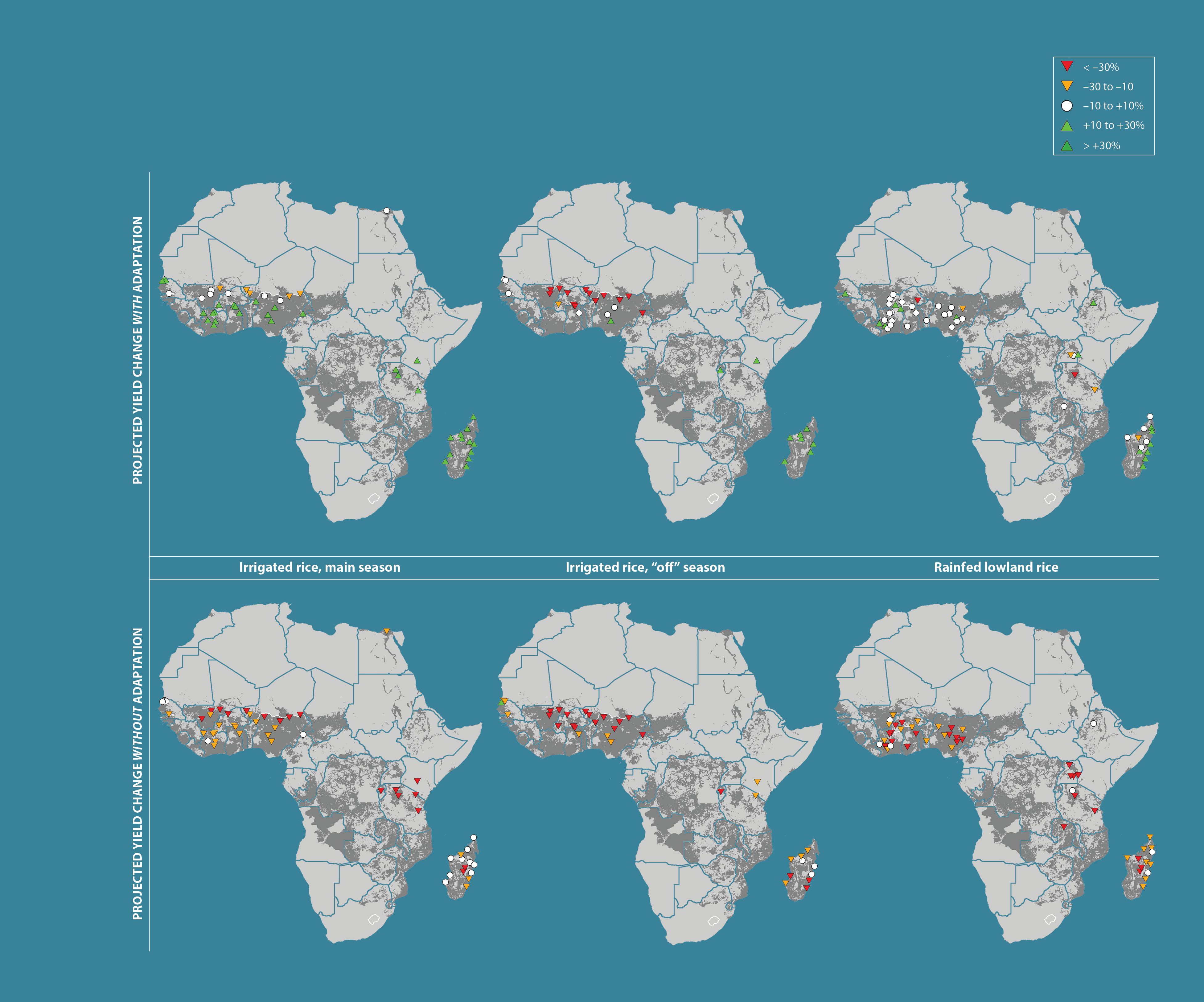 Climate change is affecting vulnerable cropping systems in Africa. Extreme events, such as droughts, heat waves, and floods, lead to crop losses and food insecurity among rural and urban populations. Gradually increasing temperature and atmospheric CO2 content impact the diverse rice cropping systems throughout Africa. Although rice production in certain areas is negatively affected, cooler high-altitude areas may become more suitable. In this study, we quantified the impact of climate change on rice productivity for the main season and dry season of irrigated rice systems and for lowland and upland dryland systems. We used geospatial analysis in combination with crop modeling across a large number of representative sites in Africa to calculate changes in rice yields for different Intergovernmental Panel on Climate Change (IPCC) climate change scenarios. These results were compared with baseline conditions in the years around 2000.

The largest decreases of 40% to 80% are mapped for irrigated rice cultivation in the Sahel zone in West Africa in the hot dry season, which we attributed to reduced plant photosynthesis at extremely high temperatures. In the same area in the wet season (slightly cooler), irrigated rice yields were predicted to decrease by around 40%. These scenarios call for more research on photosynthesis at extremely high temperatures. Current regional policies promote dry-season rice cultivation. The scenarios presented here question whether this is a sustainable option for the future.

We defined improved varieties as a means of adaptation for African rice farmers and we evaluated potential impact. These varieties have a so-called higher “temperature sum,” which makes them suitable for environments in which agricultural seasons become shorter. We increased the varieties’ temperature sums such that simulated duration from sowing to maturity in a future hotter climate would be the same as in the current climate. It was found that adoption of such varieties leads to less reduction in rice yields in all rice-growing environments. However, the Sahel is still vulnerable, whereas lowland rainfed production can be stabilized.

Mapped changes are for Representative Concentration Pathways 8.5 (RCP8.5), the worst-case scenario set by the IPCC characterized by increasing greenhouse gas emissions over time.

___________
Dr. Zwart is a former senior researcher at the Africa Rice Center (AfricaRice) and is now affiliated with ITC at the University of Twente in The Netherlands. Dr. van Oort is a former senior researcher at AfricaRice and now affiliated with Agrosystems Research at the Wageningen University & Research in the Netherlands.